The Bounce Back Loan saga continues to roll on day after day, and today I want to look back at one problem that has been around for months. As this website now gets so many visitors each day it is a problem that some of you newer visitors may not be aware of, but you may just be a victim of.

Back in May when the BBL scheme launched, due to ineptitude and some would say total negligence from the British Business Bank, they could not put in place a system quickly enough before launch, whereby accredited Bounce Back Loan lenders could check to see, in real time if any business owner had applied for and been paid out a BBL from another accredited lender.

Now sadly, there appeared to be no tech savvy person within the ranks of the British Business Bank to set up a system, which could of course have been set up overnight if they had contacted someone experienced in setting up such systems, and would have saved possibly billions of Pounds in fraud too.

Alas, the British Business Bank decided to toddle off to what some people have called a ragtag organisation called Cifas, who among other things let out meeting rooms in London selling £10 butties to set up such a system, you couldn’t make it up!!

Rishi on your new set of guaranteed loan schemes please, please, please set them up yourself, using a Government system similar to the SEISS scheme, it will be easier and you will not then be forced to pay the BBB to oversee it, nor will banks or overpriced butty sellers profit and cause bedlam from the schemes. Don’t say any laws prevent you from doing so you can get them changed at a pen-stroke (10 years locked up for lying on a Passenger Location form….)

I have spoke to many, many people close to doing things to themselves I never want to speak of due to the ineptitude of those organisations. DO NOT LET THAT BE REPEATED. 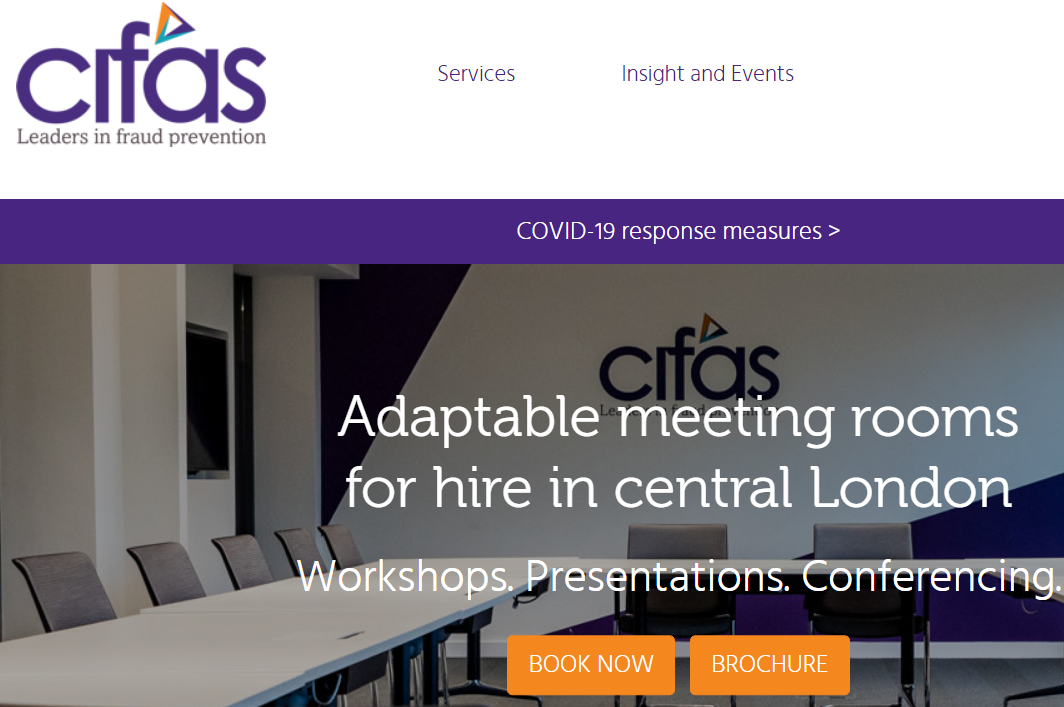 The BBB commissioned Cifas to set up such a system, which was basically a simple database that a lender could update when they approved and paid out a BBL and double check to see if a business entity applying for a Bounce Back Loan had applied for a loan from another lender, and one would imagine had been actually paid one out too.

It has been said by bank bosses that it took around 6 to 7 weeks for Cifas to set up that real time reporting database, and obviously those out to cheat the system had a field day in the first few weeks of the scheme going live.

However, when that database went live, it sadly caused more problems than it was set up to solve, as many people were unfairly declined for a Bounce Back Loan for various reasons.

Those reasons included but were not limited to, being declined for simply going to the Tide Bounce Back Loan waiting list (and not even getting a BBL), being declined for applying for an HSBC Feeder Account (and not even getting one), in fact I have even seen evidence backed by cold hard proof some people were listed on that database as getting paid out a Bounce Back Loan from Starling Bank, when they never did get paid one out.

The list of problems is huge, all down to errors/problems with that database. In fact, one person applying for a BBL with Conister who had two businesses and had received a BBL from Lloyds got emailed by Conister to an email address they had not used on their BBL application form with Conister, but the one they used with Lloyds.

Something very dodgy going on there, data breach/misuse of the information on that database? Possibly.

I have seen 100’s of complaints about unfair declines caused by that database, including bank staff not reading it correctly, incorrectly using it, or entering information upon it erroneously.

Quite surprisingly, Cifas yesterday answered one of my Tweets I sent to them recently: 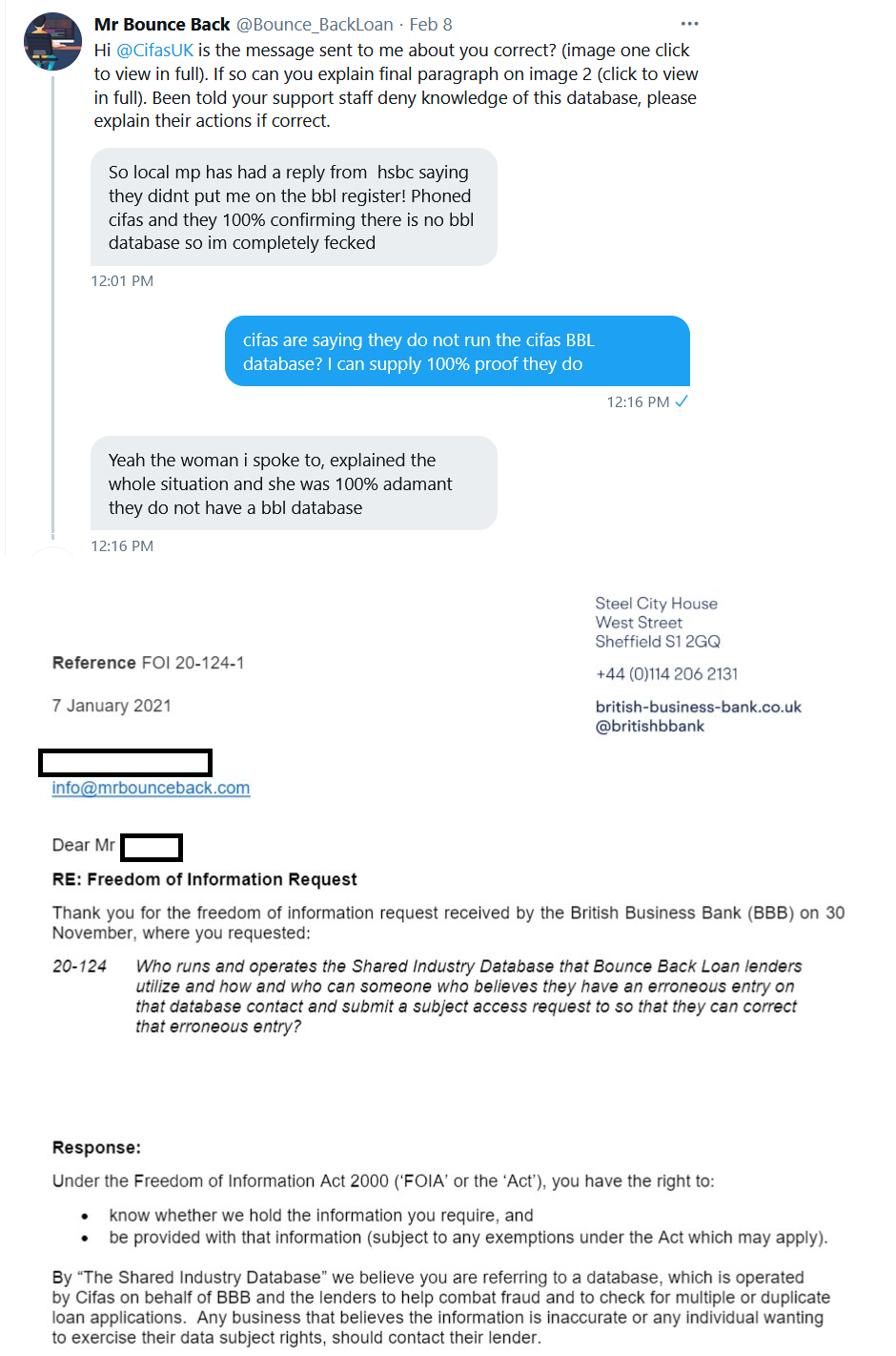 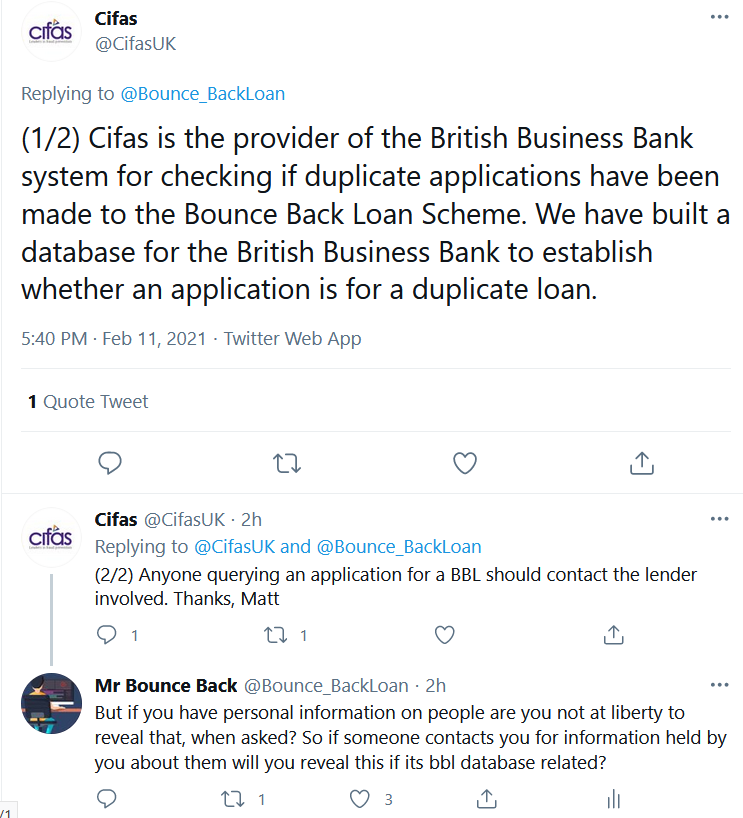 What they are saying, as the British Business Bank has told me, is that if someone feels they have a problem with an entry on that Cifas run BBL database they should contact the bank.

That sounds simple, but I challenge anyone to phone up a bank and ask the support member who answers the phone how to get a problem addressed with that database.

Look at HSBC for example, I have people waiting over 13 weeks for a bloody Bounce Back Loan top up and each time they contact that bank they get fed bullshit and are told to just wait. Many people were told the same when HSBC launched their BBL facility after weeks of waiting, only to finally discover the system had not even picked up their application, so were waiting for something that would never come.

Nice one HSBC, NOT.

Anyway, just thought I would put this problem/story out there again to show the idiocy of the BBL scheme, and how those tasked with ensuring it runs smoothly are doing quite the opposite.

So, if you apply for a Bounce Back Loan and are told you can’t have one, and you ask why, and the bank says you have a Cifas marker or mention Cifas, and you ask Cifas via a Subject Access Request if you have a marker and they say no you haven’t, there is a chance, and a good one you are on that database.

As they do not mention a BBL database entry it when you request a S.A.R. which adds to the confusion for many people denied a BBL.

If you want to read more about this scandal below are a few links to news stories from weeks/months gone by about that problem.

Problems with the Shared Industry Database

Oh, and in view of the above, it does of course pose a question that HMRC could answer, you will see that question below, oh and they haven’t replied yet, still only been around a month since I asked them……