Another day goes by and I am getting a huge and increasing number of people contacting me in total distress as they have applied for a Bounce Back Loan with one of the British Business Bank accredited BBL lenders, only to be declined for a loan due to the bank that they have applied to telling them they have already got one from another lender.

This is all down to the “Imaginary Bounce Back Loan” database and saga that I have been alerting and warning the powers that be about for quite some time, if you want some background on the unfolding and sadly business destroying and business owner mental health destroying saga please feel free to read the following:

Declined a Bounce Back Loan? How to Appeal

What are Imaginary Bounce Back Loans?

An imaginary Bounce Back Loan is in a nutshell, when one lender logs onto the Industry Scheme Database (woohoo finally got its name) the details of applicants who have applied for a Bounce Back Loan.

Now, in theory that database should be a fail-safe stop check that lenders can refer to when they are processing a Bounce Back Loan, and will let them know if an applicant has applied for and has been paid out a BBL for a business with another accredited BBL lender.

Obviously in a mad dash to get one of those loans applicants are applying wherever they can, and by having that database at hand a lender can supposedly negate the possibly of approving and paying out a BBL to someone who has already been given one for one single business (you can of course apply for one BBL for each business you own as per the rules of the scheme, that are not connected to a holding company at the top of their structure).

However, what does appear to be happening, and one must wonder which bright spark thought this would be a good idea, lenders are adding the details of applicants who have may have been on a waiting or interest list for a BBL and those who may have been declined a BBL onto the database.

Lenders can and have been declining applicants for simply being on a waiting or interest list or who have been declined elsewhere, as they are seeing an applicants details on that oh so obviously flawed database and refusing them a loan until that applicant gets proof they have not been granted and paid out a BBL, even an imaginary one, that being one they were declined for (you couldn’t make this up).

What is compounding that problem, is that some lenders simply flat out decline an applicant for being on that database without telling them the imaginary BBL is the cause of the problem, and those applicants are then left on their own not knowing why they have been declined for something that have been told they have the right to apply for.

Banks do Battle with Each Other over Imaginary BBL’s

I could publish 100’s possibly 1000’s of examples of the above, however below is a classic example of one that I have watched being played out by two executive offices at two very well known banks, that being Barclays Bank and Starling Bank.

I was contacted by a BBL applicant who had been caught up in the Imaginary Bounce Back Loan saga as they could not get sense out of either bank, and they asked me if I could help those two banks see sense.

The story began when an applicant simply added their name onto the “interest list” for a BBL with Starling Bank. That bank has repeatedly told me, when I have contacted them about this problem it simply cannot happen, and fair play to them they do reply to my tweets.

A recent reply from Starling Bank that did confuse those watching my Twitter exchanges with that bank is below, and some followers stated the obvious and others jumped in with their own feedback and experiences too:

Now, I have been badgering Starling Bank to jump in and assist one applicant who has been declined in something of an “arsey” and uncaring way by Barclays for having their name added on that wretched Imaginary Bounce Back Loan database apparently by Starling Bank. 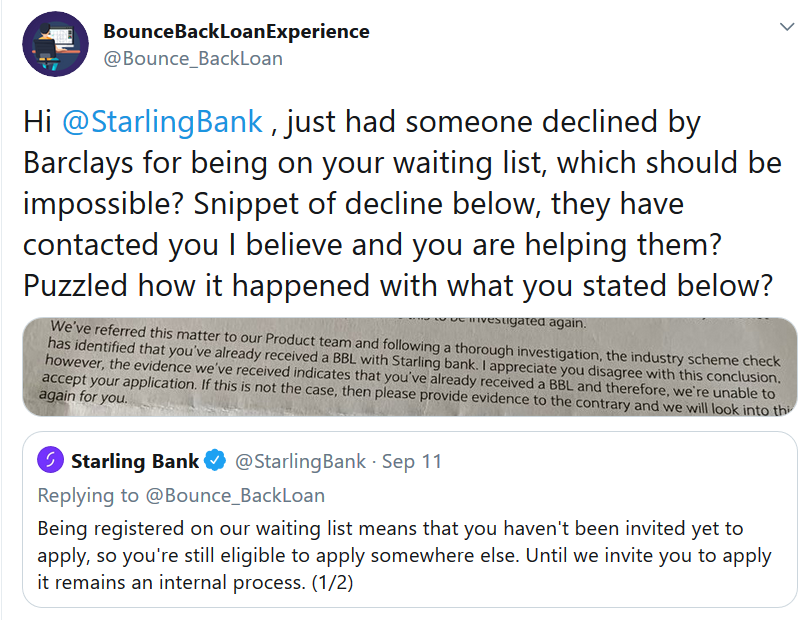 That applicant had been on the Starling Bank interest list, but to quote that applicant “I saw on Twitter they (Starling Bank) where dragging their heels, and I hadn’t yet opened my Barclays Business account, so as soon as I managed to get an appointment and account opened I thought I would jump ship as Barclays are more established”

The cries for help from that applicant continued to be sent over to me and as that person had emailed Anne Boden at Starling Bank for assistance, I gave the bank a nudge on Twitter.

Once the message got through to Starling, they then contacted Barclays in an attempt to get the problem put right. Below is the email exchange from the relevant staff members at the Executive Offices of each bank.

In exposing the following I wish to hereby invoke my whistle-blower protection afforded to me recently by a certain Government department in doing so.

Below is a rather “arsey” email to the applicant sent from the Executive Office of Barclays, basically saying go away we have made our decision, we are a huge bank you are a little fish, we will do what we like and we cannot be wrong as we can see with our own eyes the imaginary Bounce Back Loan that has not been paid out to you, well words to that effect. 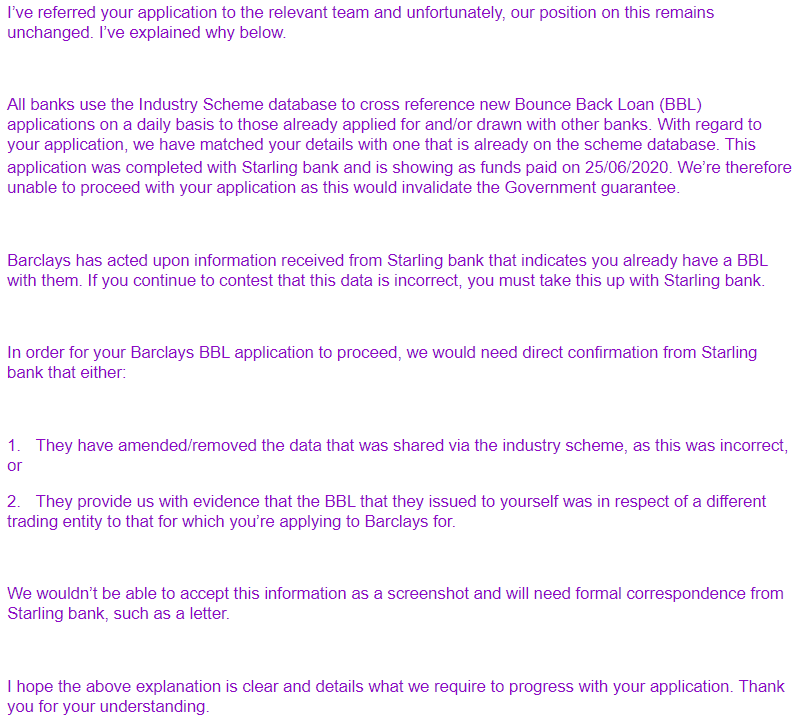 Below is an email sent from the Executive Offices of Starling Bank to the applicant, advising them they do not have a Bounce Back Loan, just an imaginary one and they should use this email to show Barclays to get them to see sense:

Barclays refused to budge on the matter, email or not from Starling Bank, and as such the applicant then begged Starling Bank to contact the Executive Offices of Barclays Bank and talk sense to them:

Below is the email Starling Bank sent to Barclays Bank

I am going to pause here, as I now want those reading the above who work for Barclays to read and digest the above, get off their high horse, realise the applicant HAS NOT GOT A BLOODY BBL JUST AN IMAGINARY ONE, and do the right thing.

Its Friday now, and that applicant has suffered enough, do not let them endure another long and drawn out weekend stressed by this whole sorry affair. GET IT SORTED – TODAY

The above by the way is one of a huge and ever-growing number of cases I see every single day of the week. As it stands the powers that be  are more than aware of Imaginary Bounce Back Loans and the trouble they are causing, but sit back and do nothing. No surprise there then.

I am also fully aware that Metro Bank are approving people for Bounce Back Loans paying them out then declining them and locking their bank accounts and not telling them why, that is another story in itself of course, but are those loans that have been initially approved then been declined also being logged on the BBL database and with they go on to pose problems for those declined applicants when they go on to apply for a BBL elsewhere?

As always I am working on the above and hope to have answers or see things put right sooner rather than later. But seeing the lack of action by the complete buffoons overseeing the scheme, best I do not hold my breath whilst waiting.

That is certainly the case with HSBC BBL’s paid via a feeder account and Metro Bank to name but two banks.