Just who is to blame for the failure of the Bounce Back Loan scheme, and by failure, I mean the tens if not hundreds of thousands of small business owners who are still firmly locked out of that scheme?

Looking at the recent set of figures released by HM Treasury you would get the first impression that scheme is a huge success, for having to date paid out a whopping £42.18 billion to some 1,397,475 businesses it does look like it has been a huge success.

But once you drill down into those figures a percentage of those loans have been paid out to fraudsters, and plenty of dormant LTD Companies have been resurrected and brought back to life so to speak, but there are a huge number of business owners that no matter how hard they try cannot open a business account with an accredited lender.

The last set of published figures also list the number of total applications for a Bounce Back Loan, which for reference currently stands at some 1,766,768. As such 369,293 BBL applications are either still to be processed, have been declined or found to not be eligible or are applications that have been withdrawn by an applicant.

Keep in mind too that “declined or found not to be eligible” could mean an applicant has fallen foul of made up rules a lender has dreamed up (many banks such as Barclays do make up their own interpretation of the rules of the scheme) or due to an error with a lender (such as an imaginary BBL being listed on the shared industry database) or a lender has decided to decline a Bounce Back Loan as they do not have the “appetite” for the market sector that applicant operates in (Metro Bank and Starling Bank has a rack record for such declines).

It is of course neigh on impossible to open a bank account with an accredited lender, as all of them bar Starling Bank have either never accepted new customers since the BBL scheme went live or impose cut off dates, those dates being often back in March and as such if you didn’t have an account with those lenders before March they will not allow you to apply for a Bounce Back Loan with them.

The reason for those cut off dates is to negate any possibility of fraud, or at least reduce the risk of fraud, and as such none of those lenders will be opening up to new customers any time soon, if they do it will only be after the Bounce Back Loan scheme ends.

Many people are still living in hope that some new lenders will come onboard, however it is only the big banks that have the systems in place and funds directly available to lend out in large numbers.

Conister and GC Business Finance both joined the scheme late in the day but both have limited funds available, and do not have the staff or infrastructure to process a huge number of Bounce Back Loans, in fact both now have as good as reached their limit on lending or have more than enough applicants to use up their allocated funds (£10 million each, which is around 333 Bounce Back Loans each).

All the above now means that many business owners have given up any hope of getting a Bounce Bank Loan, and unless something changes and quickly many more will do too.

Here is a tweet I received yesterday which is sadly one of many I get sent and see day in day out from those who have now given up. 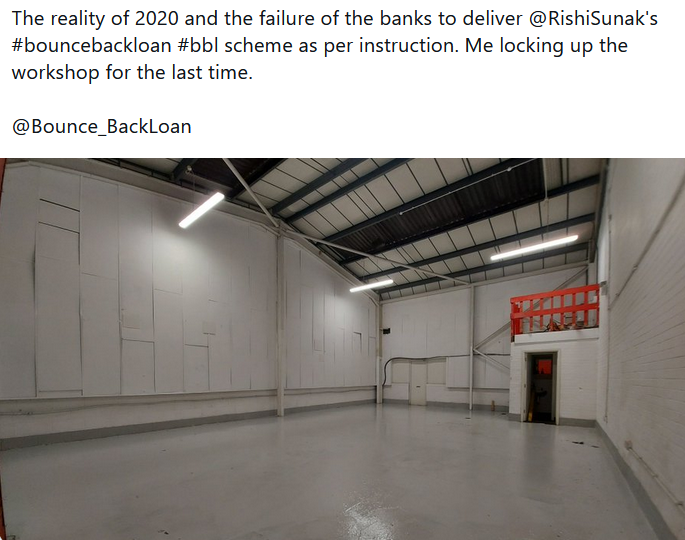 I always tell people still trying to get a Bounce Back Loan to keep the faith as there is still always the chance something will change that will allow them to at least apply for one, but even I am beginning to think that is something that may not happen now, as most lenders have no intention of giving many people the chance to apply for one.

Rishi Sunak may put into place a Bounce Back Loan Lender of Last Resort, but that is for him to decide, design and make live, for it was his idea to launch the scheme and maybe he should have predicted the banks and lenders would end up playing the games they are playing and pulling the stunts they have been pulling. We’ll have to wait and see.