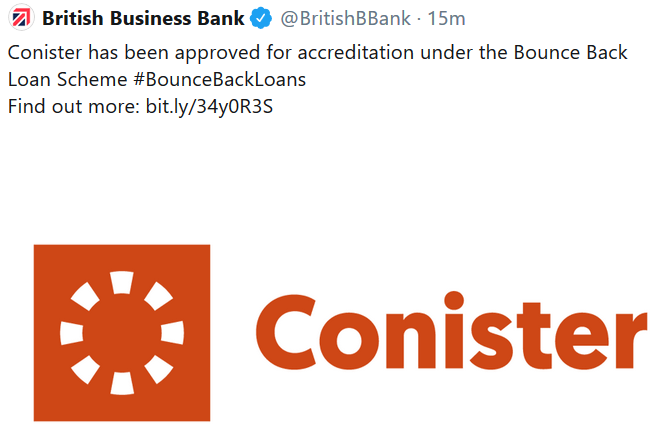 There isn’t one Bounce Back Loan accredited lender that hasn’t made mistakes or hasn’t added to the misery of BBL applicants in one way or another over the last three months or so, however it is always good to see a flurry of applicants finally getting their loans processed and paid out.

Last Friday my screen lit up over on my Twitter account with messages and tweets sent by many followers and lurkers letting me know they had finally been invited to apply for a BBL with Starling Bank.

Now you should be aware if you have been looking around this website or perusing my Twitter feed, Starling have their own set of rules and criteria bolted on top of the standard criteria regarding getting a BBL from them, and whether we like it or not that is within the rules set out by the British Business Bank.

Yesterday, Starling approved a couple of dozen of my followers and lurkers and then went on to pay them out yesterday evening too. Admittedly they did decline a couple of my followers/lurkers, and my advice if you have been declined by Starling is to apply with any of the other banks that are accepting new customers and letting them apply for a BBL, as many people declined by Starling have got a BBL elsewhere.

Obviously, there are going to be many other people who were also approved and possibly declined by Starling yesterday who are blissfully unaware of this website and my Twitter account, but facts speak louder than words and to see so many people I know of approved is always good to see.

HSBC have also been working their way through their backlog, and once again if you have been waiting and waiting for a feeder or business account or a BBL from that bank and are not making any progress then email the CEO team (Noel Quinn directly) and you will get a phone call back, and they will allocate a case handler to help move things along.

There is still a deafening silence from the British Business Bank as to whether they are currently in the process of accrediting any new BBL lenders and HM Treasury are not releasing weekly figures any more regarding the number of BBL’s approved each week, having decided to stop releasing those figures each week and reporting them monthly instead. It is obvious why they have made that weird/cowardly decision.

It still horrible fact of life that so many people are having to apply for a business loan via the BBL scheme to save their businesses through no fault of their own, and getting such a loan is proving harder and harder due to the unwillingness of many lenders to let new customers apply for an account and/or a Bounce Back Loan.

But keep the faith and keep on trying, and for those of you that are not aware the scheme is due to close on November the 4th, so there is still time for things to change for the better.

I have been banging on about the Tide waiting list for quite some time. In a nutshell if you are on that waiting list, and keep in mind they have no money to lend out, then you are likely to find that when you apply with another lender for a BBL you may initially get approved, but during the final checks, those being interbank checks some lenders will then decline you for being on that waiting list.

Please read below for some reasons as to why you may be declined a bank account and/or a Bounce Back Loan with some lenders.

Many people who are declined tend to fear it is their credit rating/score that is the cause of a decline, and whilst that can and may play a part obviously, there can be a whole host of other reasons, some of which can be sorted out, and when the latter is the case you may find it much easier to open a bank account and/or obtain a Bounce Back Loan.

Some Lenders can and will and are in within their rights to decline anyone for an account and/or BBL based on their own criteria in additional to that laid down by the British Business Bank.

With that in mind, if you have checked all of the following and/or have been declined by one lender then you are also within your rights, and encouraged to apply to any other lender that is part of the Bounce Back Loan scheme.

SIC Code – Not matching on companies house vs what you put in your application.

SIC Code – considered a reputational risk – you would be surprised how many business types fall into this category.

Voters roll e.g. Chris vs Christopher, as your middle name.

Business address not matching, has your accountant used their address to register? What is your correspondence address at companies house?

Markers registered against the company or director

Many Bounce Back Loan applicants that have been through hell and still are experiencing problems have been offered compensation from a bank ranging from £50 up to £2500 for the more complicated problems.

It is your choice as to whether you accept any offer of compensation and the amount you accept too.