Distraught, deflated and defeated are just some of the words used by those messaging me yesterday regarding the latest twist in the never ending Bounce Back Loan saga, that being the decision taken by Metro Bank to decline large numbers of people for both a bank account and a Bounce Back Loan.

As you will probably be aware Metro Bank re-opened their online business bank account application system last week, and that meant anyone wanting such an account could, if they were lucky, apply for one online, and get a decision instantly on whether the bank was prepared to give them an account, and if approved an account was opened on the spot allowing them to then instantly apply for a BBL, and in some cases instantly be approved for a Bounce Back Loan.

However, many people who did apply for a BBL and were paid it out, or were waiting for the loan to be paid have seen their bank accounts being locked, and then have been receiving messages that their BBL approval was being overturned and therefore they were declined a BBL.

Some people were told their bank account application and/or BBL application was being reviewed when they applied for either, and many of them were also told yesterday they have been refused an account and/or a bounce back loan.

Obviously, those declined, much more so those who have been approved for a BBL, then declined, even after initially receiving their loan contacted the Metro Bank support team to find out what was going on.

They were mainly met with a wall of silence and were told the decision would not be overturned and if they have a complaint, they must write into the bank.

Keep in mind, that once approved for a BBL it is registered as such, so those applicants are now going to face a whole host of problems trying to get a BBL elsewhere, as when other banks check the register to see if they have a BBL that register will of course (until corrected)  indicate they have when they obviously now haven’t, and with the clock now ticking down to the end of the scheme that does pose a problem for those applicants.

Many people however did not take the decline sitting down, and as such they contacted local branch managers on the phone, some even visiting a branch and demanding an explanation.

I alerted the British Business Bank and Metro Bank of the unfolding situation, but as usual, both parties buried their heads in the sand and never replied. 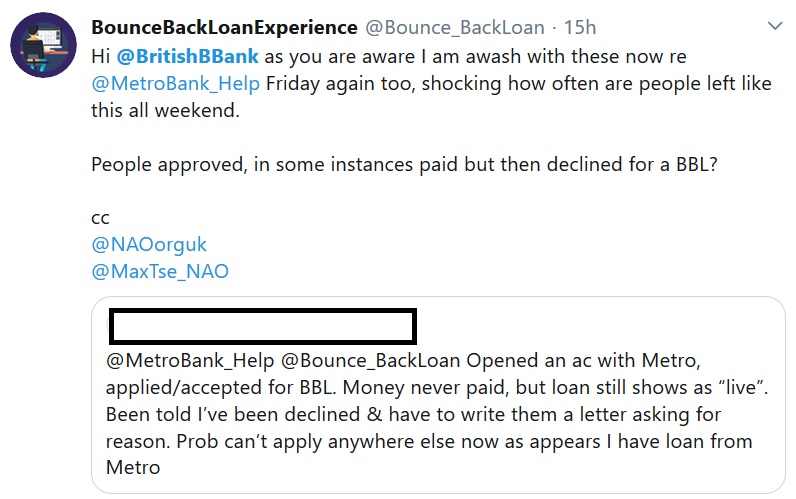 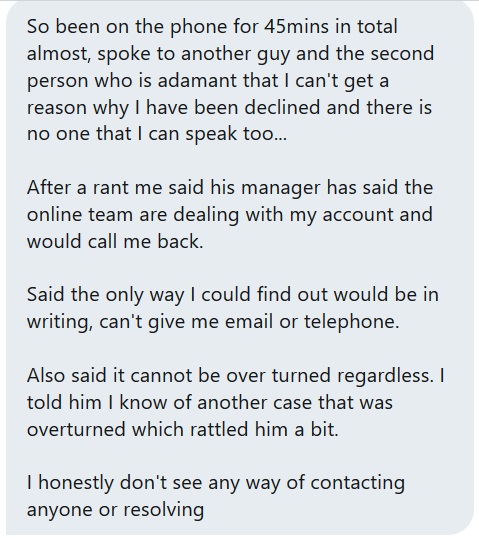 As it stands one of the most used reasons by Metro Bank for those declines is the applicant’s business is in a market sector that does not fit the “appetite of the bank”.

I asked my Twitter followers who had been declined by Metro Bank to tell me which market sector they were in, and these are some of the replies which did begin to form a pattern based on the numbers and types of market sectors:

I have been advising everyone declined after being approved by Metro Bank to not give in and demand a review of the decline. For what its worth some Metro Bank managers are asking for a whole host of supporting documents and have offered to review such declines over the next few days.

This is a reply from someone who has appealed and their experience so far of that appeal: 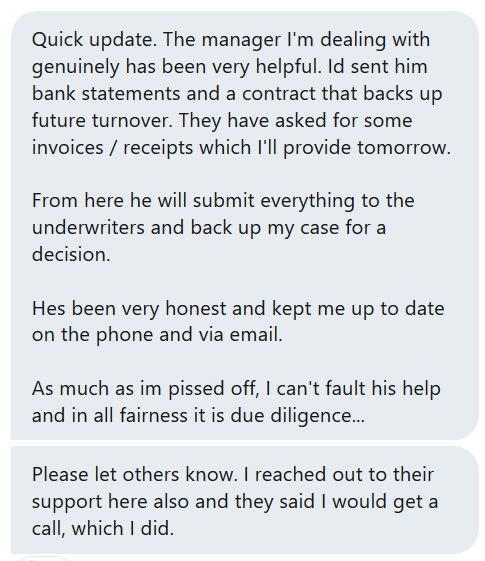 Therefore if you had initially been approved for a BBL then declined by Metro Bank make sure you appeal that decision, ideally in person at a branch so you are not talking to someone on the phone who is going to be reading off a script with the aim to get you off the phone.

Those declined a bank account, well sadly a bank can decline who they want, and if you are prepared to do battle with the bank to get an account opening decline overturned feel free to do so, but I suspect Metro Bank are not going to be very eager to review such declines.

Update on the above appeal: 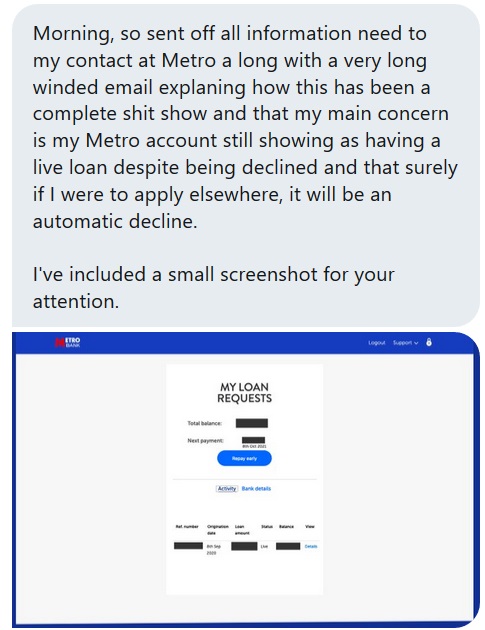 Conister are still making a complete hash of things when it comes to Bounce Back Loans. They are however still processing applications and I have had even more people contacting me letting me know they have been paid out a loan by Conister.

They have however, sadly, also been telling some people they have loans elsewhere for the business they have applied for a BBL and therefore declining them for a BBL when that is not the case.

If you have been declined based on the fact the Conister team are incorrectly telling you that you have a BBL elsewhere when that is clearly not the case, appeal that decision immediately, be aware though the have limited funds, which based on the fact they are paying out those now approved means even if they have made a mistake declining you there is no guarantee they will be able to approve you if they have made a mistake.

Oh, and I have stone cold proof they have been doing something rather shocking when accessing the BBL database, but more about that later. I have been warning the British Business Bank about problems with that database for months, alas I have been ignored.

The British Business Bank allegedly have been telling “interested parties” who see my updates and ask whether there is a problem with the database, rather smugly that there isn’t and to ignore what I am saying, which they themselves are doing, (ignoring them)

I do so look forward to posting up  proof once those affected by Conister on yet another BBL database breach/problem I have just discovered when those applicants affected by it have been sorted out.

Teaser for the British Business Bank from a certain accredited lender of theirs:

As always my dearest British Business Bank, you can contact me for that proof, AND FIX THE GLARINGLY OBVIOUS ERROR bet you won’t……

I also asked Starling Bank if there was any possibility whether those on their “interest” list could experience problems with other banks when applying for a BBL for being on that list, they as always replied immediately to assure me that could never happen: 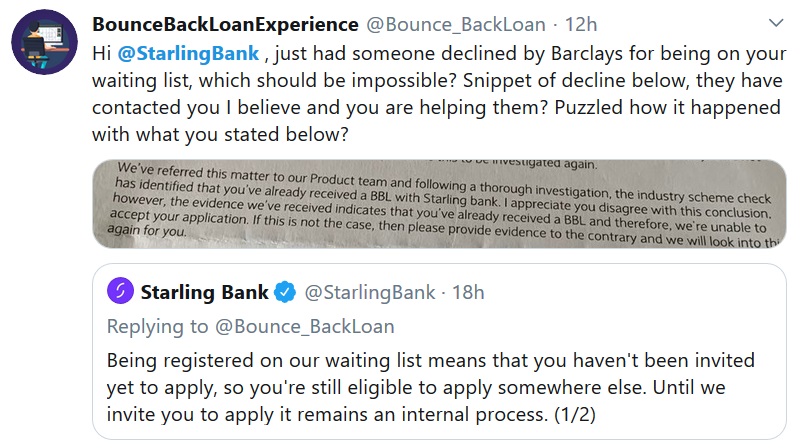 However, it wasn’t very long (as you can see above) before I had someone contact me telling me that they had been declined by Barclays as it appears, they had been given a BBL from Starling, which is something that applicant denies.

The applicant assures me Starling are investigating, so we will see how that progresses…

Possible explanations, Barclays are wrong, Starling Bank are wrong, or the applicant is wrong or the BBL register is to blame.

I have been banging on about the Tide waiting list for quite some time. In a nutshell if you are on that waiting list, and keep in mind they have no money to lend out, then you are likely to find that when you apply with another lender for a BBL you may initially get approved, but during the final checks, those being inter-bank checks, BBB or BBL register (or whatever they wish to call it) some lenders will then decline you for being on that waiting list.

I have always advised those who are having problems with a bank regarding any aspect of getting a Bounce Back Loan to contact their MP.

I have seen many MP’s go above and beyond to help people, and to those MP’s (and I know who you are) thank you so very much for that, it’s truly great to see you helping your constituents with such determination, however the opposite is also true regarding some MP’s.

Sadly it has come to my attention that one MP who stepped in to help someone having difficulty obtaining a BBL received a reply  back from the British Business Bank with completely inaccurate information, here it is in a nutshell: 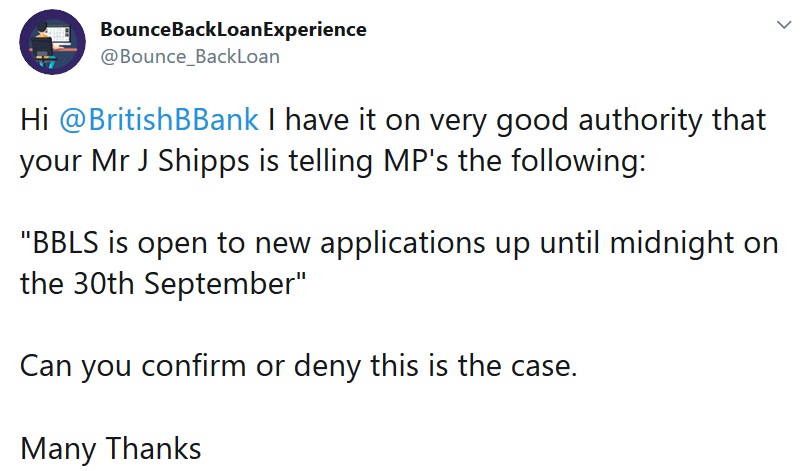 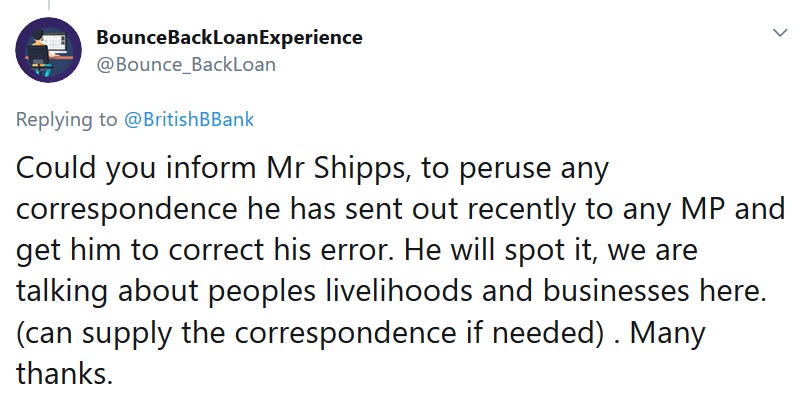 Oh well there we go dear reader, this Bounce Back Loan scheme really is messed up for many people. I will always be here for you. Remember, you are not alone so please do not lose hope or faith that you will get a Bounce Back Loan that you so desperately need, with some luck and determination over the final few weeks of the scheme, maybe, just maybe those in power with pull their bloody fingers out and actually do something to help those still excluded from the scheme through no fault of their own.