It reads like the script of a Carry on Film, however today, after weeks of mystery we all finally learn just how many Bounce Back Loans have been approved to date.

Up to and including August 16th HM Treasury proudly released a weekly update of those figures and to be fair in the first month they were certainly impressive to look at.

Now, for reasons at the time unknown, once the week ending figures were released up to and including the 16th of August, HM Treasury announced that they would, moving forward, be released monthly, with the next set of figures being made live today, that being the 22nd of September:

That somewhat rattled me to be perfectly honest, for by having access to those figures I could prove that whilst demand was still very high for Bounce Back Loans, and the number of accredited lenders has grown, the actual number of BBL’s being approved on average each hour between accredited lenders was tiny. 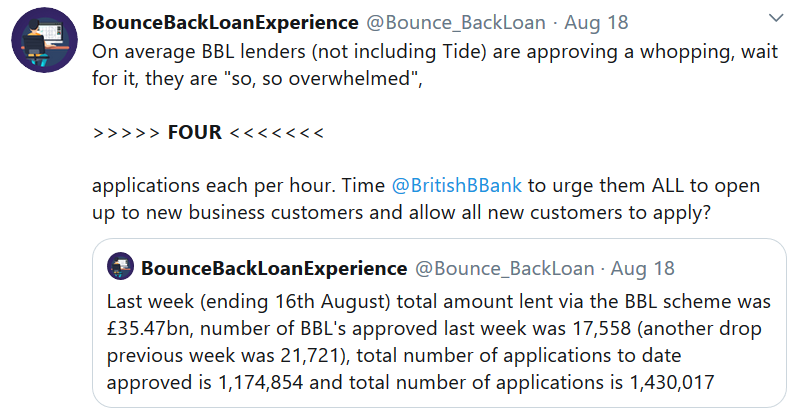 The main problem is that many people are still unable to access a Bounce Back Loan, due to most lenders not allowing new customers to open a bank account with them, which then would give them the ability to apply for a Bounce Back Loan.

That does of course mean the handful of accredited lenders that are accepting new customers, which disgustingly is just 6 lenders out of 28 are still being overwhelmed with both applications for bank accounts and Bounce Back Loans, and that was and continues to create a backlog of applicants.

Those handful of banks however are declining people for bank accounts due to all manner of reasons and as such there are still huge numbers of people still unable to access a BBL, no matter how hard they try.

The stubborn resistance of the majority of lenders to open up their schemes to new customers is alarming, and HM Government must be somewhat annoyed to say the least with all of them sticking two fingers up at them and flatly refusing to open up the scheme to everyone eligible. I certainly am annoyed, as too are the many, many businessmen and businesswomen still unable to secure a Bounce Back Loan they are eligible for.

I did try to badger HM Treasury, the Commons Treasury Committee and, in my opinion and based on experience of the way they are ignoring complaints about the BBL scheme, the useless buffoons over at the British Business Bank for the figures, however apart from the Commons Treasury Committee letting me know they do not have access to those figures, and the British Business Bank saying submit a written FOI instead of a simple FOI request on Twitter and HM Treasury keeping silent, I never did get access to those figures. 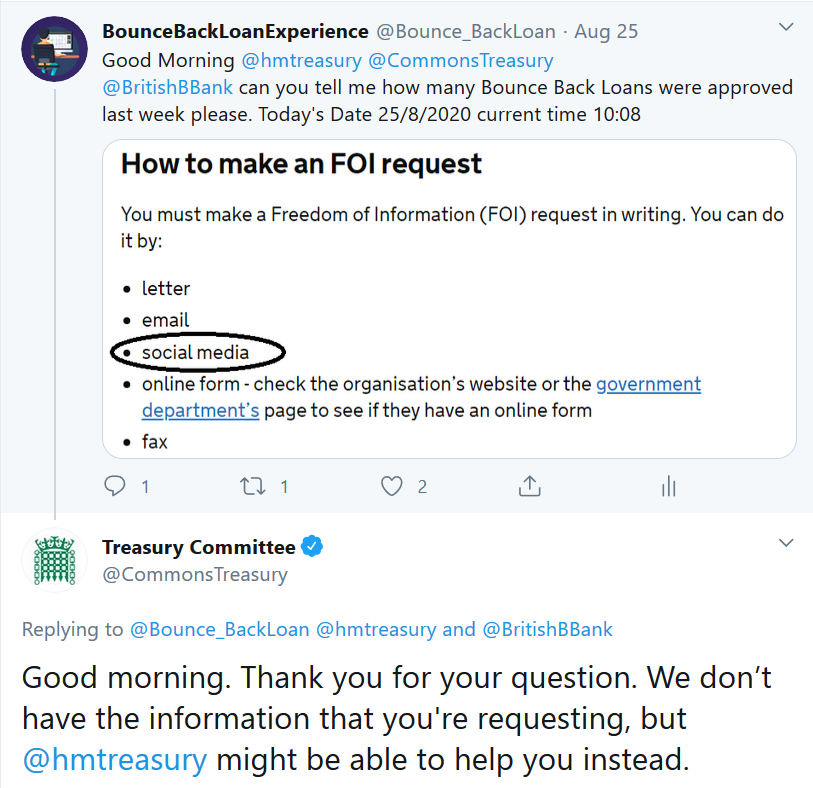 Reply from the British Business Bank

What is the BIG secret British Business Bank? This is what you are up against when you want a simple set of facts and figures that would not be hard to access for them. But no, you must try the FOI route which would take much longer to achieve than waiting for the now monthly figures to be released anyway. But hey ho make your own conclusions as to why they wouldn’t release those figures. 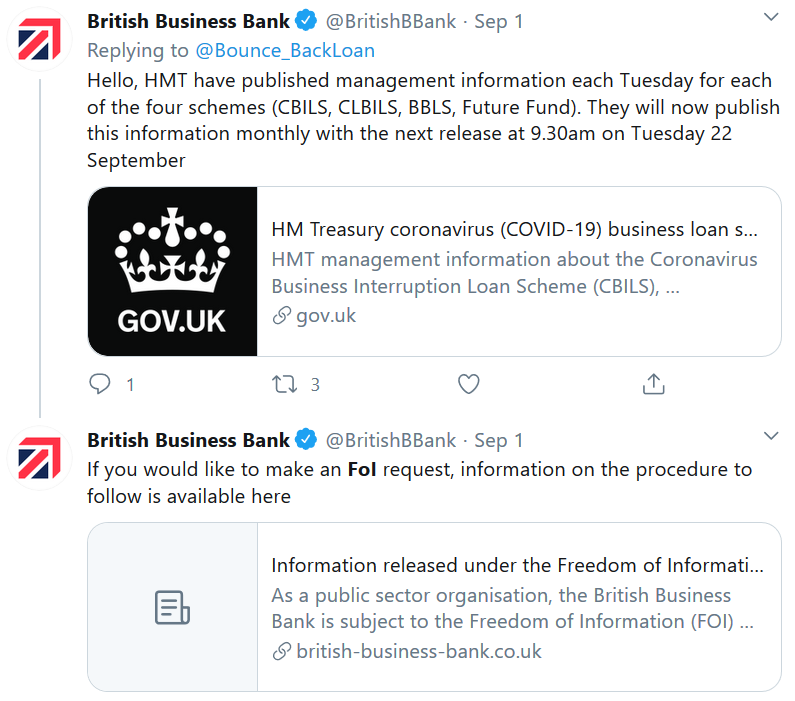 Oh, and to add more intrigue into the top secret nature of getting access to those figures, according to Lloyd’s bank for example all of those named above would and could have access to them at any time without jumping through hoops:

Plus lenders are required to furnish the British Business Bank with those figures too.

The Mystery is Solved?

The timing of the next set of BBL approved figures that being today may have finally made sense, for during the course of today, that being the 22nd of September, miraculously when the next set of now monthly approved BBL figures finally get released, Rishi Sunak is expected to announce the extension of the Bounce Back Loan scheme to November the 30th,  with lenders then having until the end of December to then process those BBL applications they still have in their systems.

Conspiracy theorists could have a field day, was a new lock-down in the pipeline and being planned a month ago which led to the delay of the release of the BBL figures until today and the expected announcement today of the extension of the BBL scheme, to make the Government look caring and to counteract the depressing news of a new lock-down and get small business owners unable to get a BBL onside? 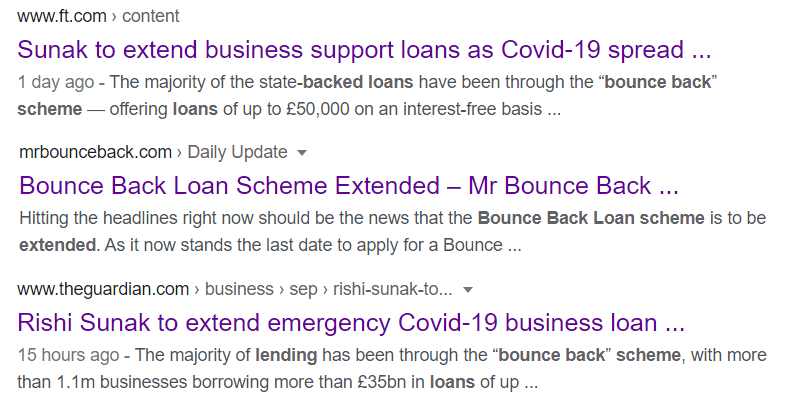 Who knows, but let us stick to the facts.

Below are the facts and figures surrounding approved Bounce Back Loans since the scheme was launched, and you will easily see for yourself just how the number of approved BBL’s continues to drop each week.

Keep in mind that more and more lenders did come onboard at various times, yet the number of approved BBL’s continued to drop, some might say “well demand is dropping”, however bar one single lender ( with very limited funds to lend out, who has since closed their doors to new applicants altogether) the additional ones that did come onboard only offered BBL’s to their own customers.

May 4th to May 31st Bounce Back Loans Approved