You may feel like you have been left to fend for yourself when it comes to applying for a Bounce Back Loan, and much more so if you experience a problem with your application, and that is why I set up this website and the Twitter account back in May.

Sadly, due to the lack for helpful information coming from the likes of the British Business Bank, and their accredited Bounce Back Loan lenders, the place you find yourself in when things go wrong, can be very dark and a very lonely place.

Therefore as usual, in today’s news update I will be giving you an insight into another problem that I see day after day, which is a problem caused by HM Treasury and the British Business Bank and is made even worse by the accredited lenders themselves.

When the Bounce Back Loan scheme first went live, there was no system in place that would allow lenders to see if a business owner had applied for and had been granted a Bounce Back Loan, and there was a possibility that someone could apply for more than one loan with different lenders and get approved and paid out for a loan several times for the same business.

So, a hurried system was put into place that would negate the possibility of that happening, and that was something known as the “Shared Industry Database” which can also go by a different name.

What should be a simply system is sadly riddled with errors and problems and as such allow me to enlighten you as to some of those problems, for there is a very good chance you may experience one of them when applying for a Bounce Back Loan between now and the end of the scheme, that being on November the 30th 2020, especially if you have applied for a BBL with more than one lender and have been declined with a lender or even when simply being on a waiting list with a lender.

Sadly, many people have found themselves listed upon the Shared Industry Database as having a Bounce Back Loan when they do not have.

Some people may have applied with Tide many moons ago and added their names to their waiting list (before they closed it when they ran out of money to lend), and their details got added to that database.

The same has been discovered with Starling Bank customers, even though Starling Bank say that is impossible, some people who have not received a loan paid out by Starling Bank have found they have been listed as being paid out a loan on the database.

You may also be one of the many people who applied for a Bounce Back Loan with Metro Bank and who were approved for a loan, had your paid out then found your account locked and your Bounce Back Loan snatched back due to a “late decline”, and if so there is always the very real chance that an imaginary Bounce Back Loan as I will call them is also listed on the database.

What could happen, and this is very annoying, is that a lender you apply for a Bounce Back Loan could decline you for that loan but not let you know why.

It could be the case that they saw your details on the Shared Industry Database and declined you in the mistaken belief that you have already got one for the business entity you applied for.

If you do get a decline, you should get in touch with the lender and ask them is it due to being listed on that database, and if so ask them which lender states you have a Bounce Back Loan, if they tell you then you will need to contact that lender and ask them for written proof that you do not have a Bounce Back Loan from them and then send it to the lender that declined you, in the hope they will review your application with that letter supplied and go on to approve your application.

I am still utterly gobsmacked that the British Business Bank do not alert people of this problem or some banks do not let people know of this oh so common problem when declining applicants for a Bounce Back Loan.

I have told the BBB multiple times of this problem and did so again last night, how hard is it for them to instruct their accredited lenders to add a line or two of text into any decline email altering people of that problem and how to fix it?

Get Proof You Do Not Have a Bounce Back Loan

If you do find out that you have been declined for a Bounce Back Loan and by some miracle the lender you applied to for that loan lets you know its due to you being listed on the database as having a BBL, then you will need to approach the lender that listed you on the database as having one and get them to send you out a PDF letter or similar stating they never issued you with one.

They should do that as standard, or even the bank you applied to that declined you should contact the lender that has you listed as having a BBL themselves and save you a lot of time messing about trying to get it sorted, for you could be on the phone for hours or even days trying to get it sorted, but many lenders are very clearly not doing so or it hasn’t dawned on them to do that to save applicants added stress.

As I always like to do when I expose a problem with the Bounce Back Loan scheme, below you will find some emails sent out to applicants and some Tweets from lenders that prove the Shared Industry Database problem exists.

Tide can and do now supply a standard PDF letter that anyone experiencing a problem getting a Bounce Back Loan with another lender due to being listed on the Shared Industry Database can obtain from them. 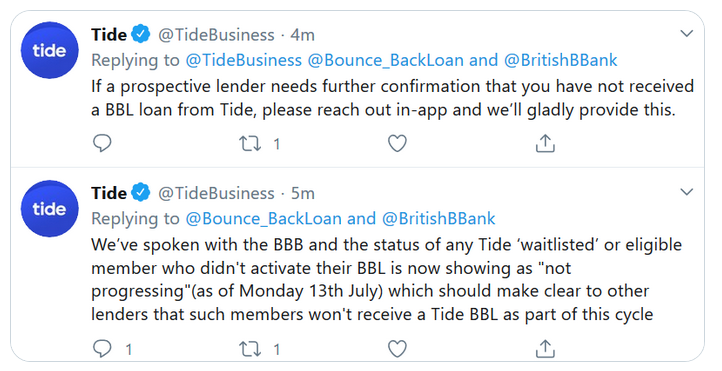 They claim they told the British Business Bank back on the 13th of July about this problem, however I have seen no end of people still having that problem after that date. But why did they list people on a waiting list on the database in the first place, when they hadn’t even applied for a BBL let alone get one?

Starling Bank claim there is no way you can be added onto the Shared Industry Database if you are on their waiting list or be listed by them as being paid out a BBL when you haven’t been, which sadly as you will see from Barclays response to them below in the Barclays section is not exactly true.

Even though they state that problem does not exists, quite surprisingly they do have a letter that you can ask for and supply to another lender, so why have an “email conformation” available if there is not a problem? Utter madness.

Metro Bank have been declining people for a Bounce Back Loan after approving them and that simple fact could see you being listed on the Shared Industry Database as having a BBL when you have not.

In fact, they have gone on record when replying to some applicants that Starling Bank are allegedly not following the inter-bank process, that being correctly using the Shared Industry Database. 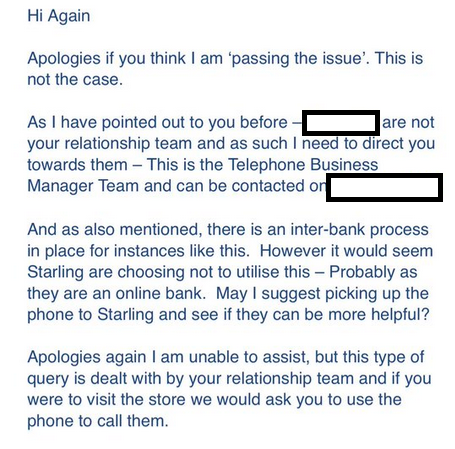 Barclays sent off some snooty emails to Starling Bank when they declined an applicant they saw listed on the Shared Industry Database as having been paid out a Bounce Back Loan by Starling when that applicant told them they hadn’t.

Email from Barclays to Starling, the former telling the latter they have messed up:

After a lot of arguing between each bank, I told the applicant to contact Starling Bank who had caused their problem and get them to sort them out a Bounce Back Loan as Barclays didn’t want to help that applicant.

In fact, quite shockingly the person at Barclays processing the complaint from the applicant decided to invent a rule that didn’t exist to get rid of that applicant, and told them that even though they didn’t get a Bounce Back Loan from Starling Bank the British Business Bank rules (in their warped mind) state you can only apply for one Bounce Back Loan and if its declined by another lender you can never apply again!

As for Conister, well to cut an exceptionally long story short, someone applied for for a Bounce Back Loan for a second business they own, which is allowed, and got declined by that lender.

It turns out the email address had been scraped off the Shared Industry Database. When advised to alert the COO of Conister by myself and complain the applicant was eventually approved and paid out when Conister admitted their error. Which any sane person would surely call a data-breach of that database.

One bank that is aware of this problem is Clydesdale, and if you are declined with them they allow you to appeal, and for the record I have seen many people win their appeal once they send in the required proof they have not got a BBL with another lender if that was the reason for the decline.

British Business Bank – Shame on You

The British Business Bank remain silent on this problem and many, many other problems, and instead of helping Bounce Back Loan applicants they remain silent and do not alert applicants to those problems and how to get them sorted out. Shame on them for their lack of action.

Perhaps the following two people should decline their MBE’s? 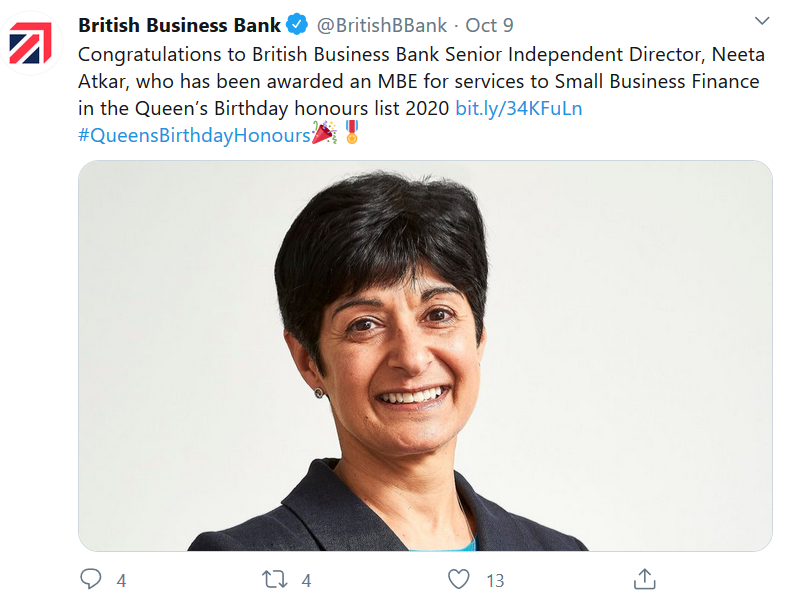 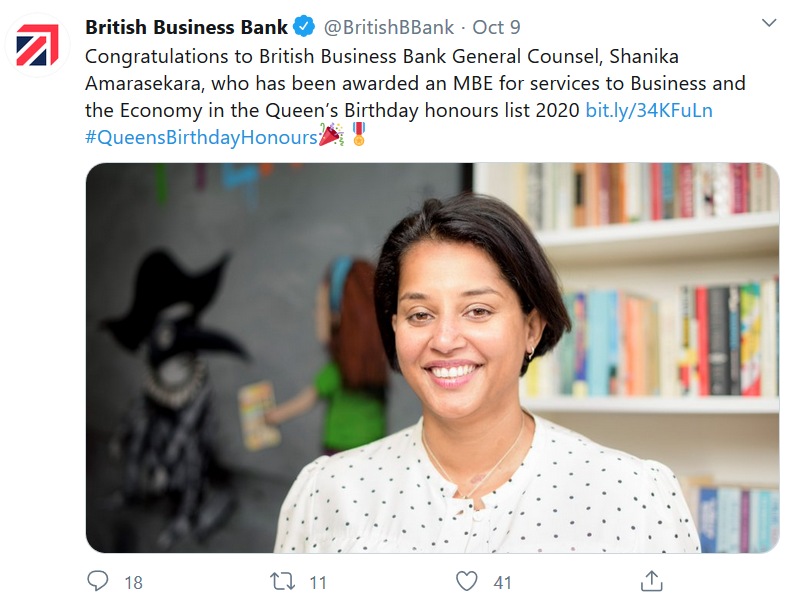