I am often sent all manner of screenshots backed by hard copies of emails and letters sent to Bounce Back Loan applicants, and some of what I come across is truly shocking. 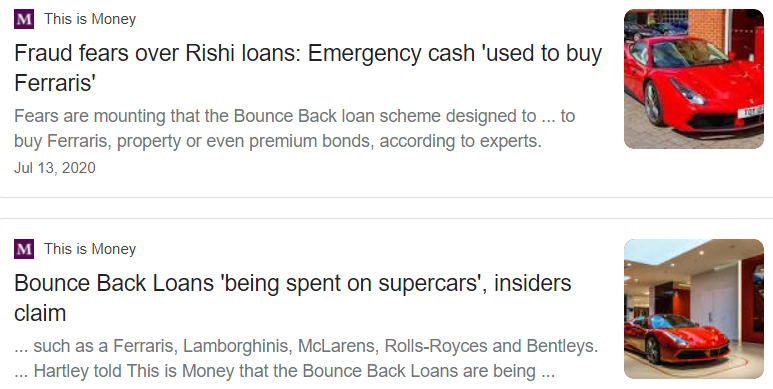 c/o This is Money

So today I want to ask the question are banks bagging Bip payments from Bounce Back Loans inadvertently or otherwise from loans they haven’t processed or paid out on, and possibly buying Ferrari’s with their fat cat banker bonuses?

The reason why I ask that is many, many people who applied with Metro Bank for a Bounce Back Loan were approved paid out their loan then had the approval declined, their accounts locked and therefore had the BBL snatched back.

The British Business Bank did finally reply to my question, probably after being told to do so, and this is their reply:

However, as you may be aware I did expose a recent problem which saw Barclays declining an applicant’s Bounce Back Loan application due to them believing, due to the details of that applicant appearing on the Cifas shared industry database that there was a live BBL for that applicant.

The applicant could do nothing more but sit back and watch as Barclays and Starling Bank had an argument between each other as to who was right. Starling have said such a thing could never happen by the way:

The upshot of that argument saw Starling being shot down in flames and having to admit to Barclays they did log the applicants imaginary BBL incorrectly on the Cifas shared industry database, and they finally corrected that database.

Below is the letter Starling had to finally send to Barclays (after multiple emails arguing between each other), to let the latter named bank know they had messed up and to hopefully allow Barclays to finally approve the applicants BBL 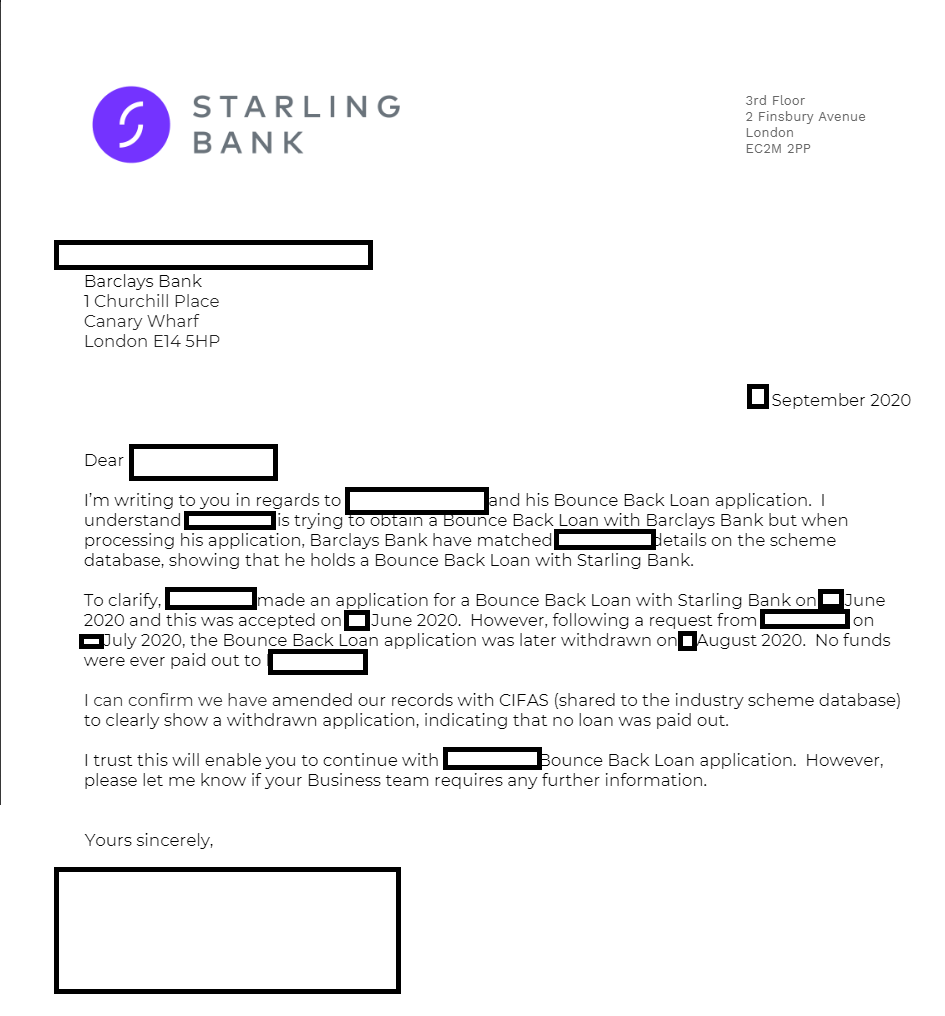 Think for a minute how that applicant felt stuck in the middle of two banks, helpless, bereft of a business saving Bounce Back Loan and unable to get sense out of either bank and not knowing what to do, in fact below are two emails they sent to the banks in complete desperation:

The above does beg the question has Starling Bank been paid out a Bip for that incorrectly logged Bounce Back Loan?

Plus, it does beg the question with so many other applicants being messed around by the banks and having imaginary Bounce Back Loans logged onto the Cifas shared industry database whether any banks have bagged Bip’s on loans they may never have paid out on.

I have of course alerted HM Treasury and the Commons Treasury Committee and await their instruction, and mentioned I have given up with the British Business Bank as they are prone to meltdowns and hissy fits when you point out any failings to them. 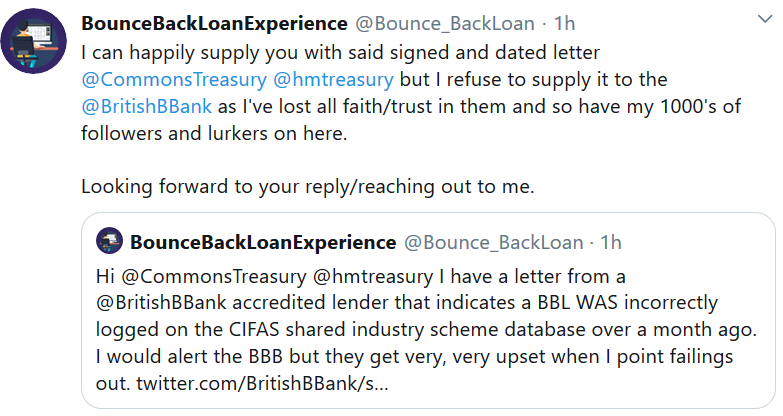 British Business Bank Have Not Got a Clue

You have to hand it to the British Business Bank, when it comes to Bounce Back Loan applicants experiencing problems like the one above, they really do not have a clue, look how they respond to the above problem:

In fact, some followers have contacted Cifas about the wretched database and have had the following: 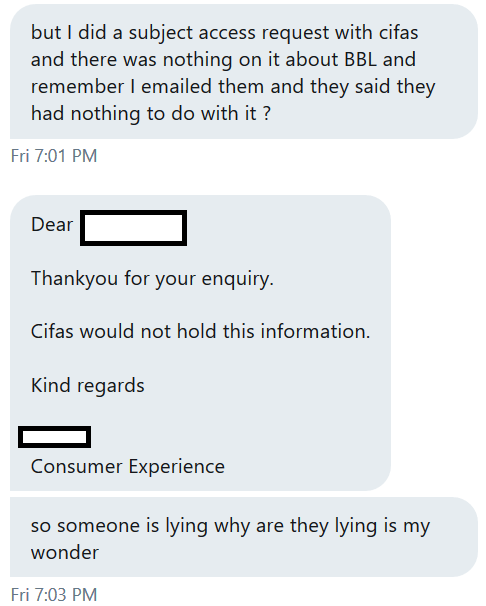 For reference I tried to contact Cifas the other day but they had their phones turned off and appeared to have gone into hiding. So fat chance of anyone trying to get a prompt reply and a solution to their problems! 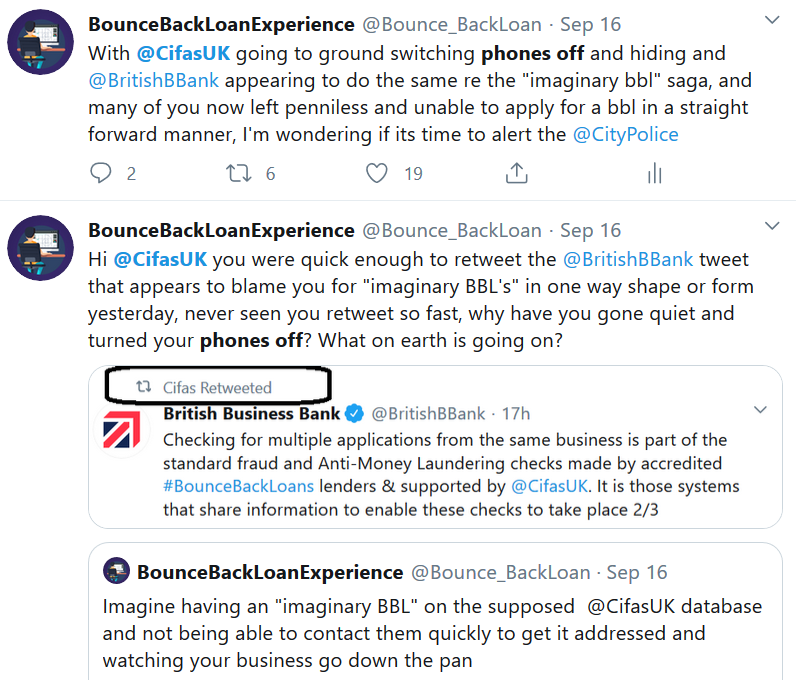 In exposing the above I wish to hereby invoke my whistle-blower protection afforded to me recently by a certain Government department in doing so.