I have been busy digesting and trying to make sense of the facts and figures announced recently relating to Bounce Back Loans, and today I will lay out some interesting ones.

The first figure that each of the main banks have revealed is that around 70% of Bounce Back Loans were approved and paid out to business owners that had never taken on debt before.

That figure should be raising eyebrows, for it is those small business owners I am often speaking to, many who are struggling to repay their BBLs, and it is a quite natural, having never taken on business debt before they are in a completely alien place.

Whilst the powers that be remain tunnel visioned on fraud and unable to spot what should be staring them in the face, that being people having sleepless nights worrying about their BBL repayments due to extended lockdowns, the cost-of-living crisis and seeing their business income decimated, I will continue to get the information out there they are desperately seeking.

Simply slapping up on a BBL lender’s website the details of a range of third-party debt advice organisations contact details is not good enough, people need to see, hear, and have access to BBL related help and advice that is relevant to them, as they may be sat at home at 3am unable to sleep and so worried they are ignoring bank texts, emails, letters or phone calls.

Take for example how this text message is worded (from one of the major BBL lenders I might add): 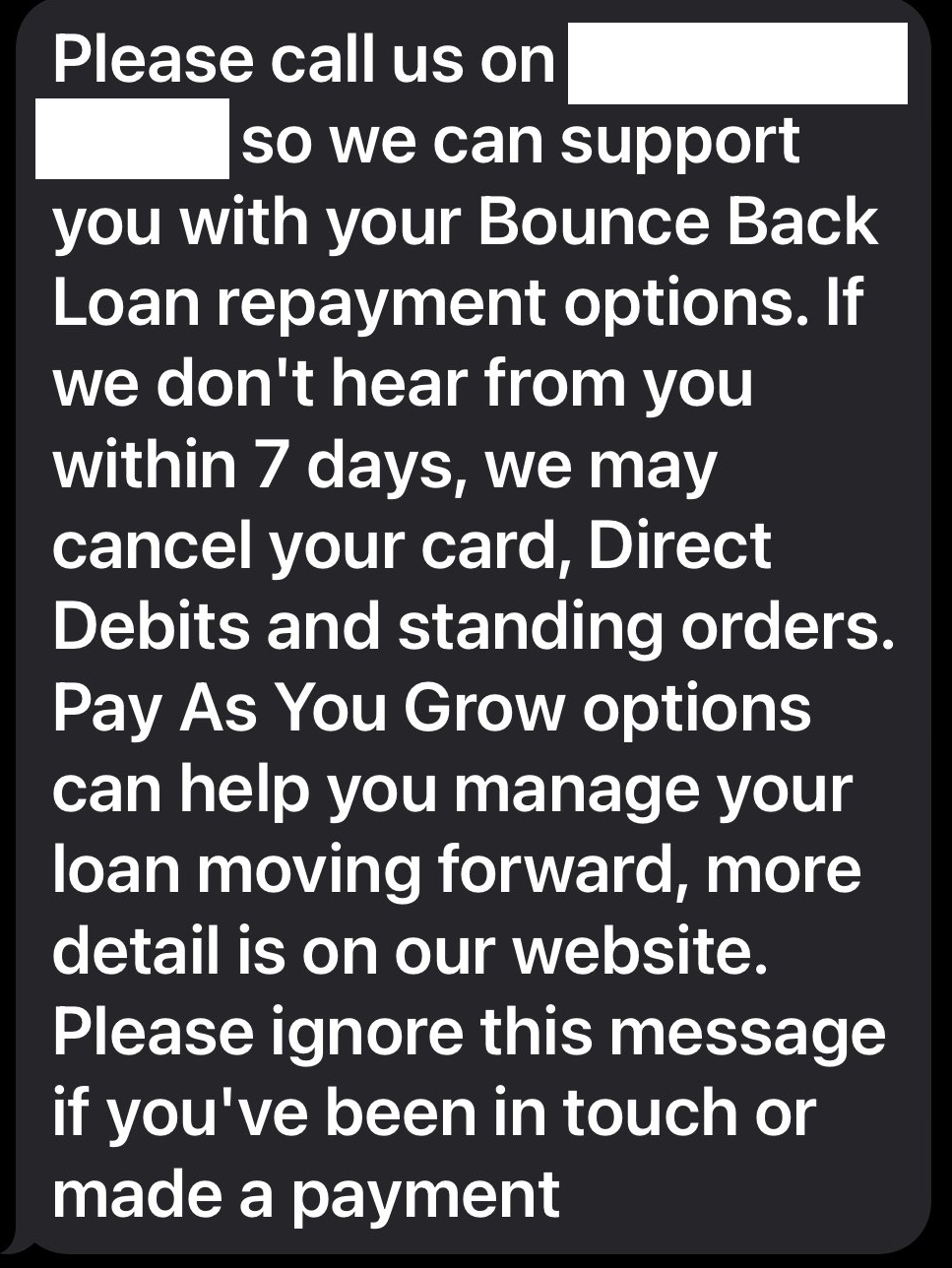 That needs changing and rewording for a start.

Be aware I am filming a video very shortly with one of the main BBL lenders and a few other “interested parties” who have kindly agreed to appear in it, I take my hat off to that bank boss for having the foresight to listen to me, realise extra help, support, advice, and information needs to be available and they are prepared to make that happen, more on that here:

Here are some worrying figures surrounding arrears and PAYG take up (as off the end of Sept): 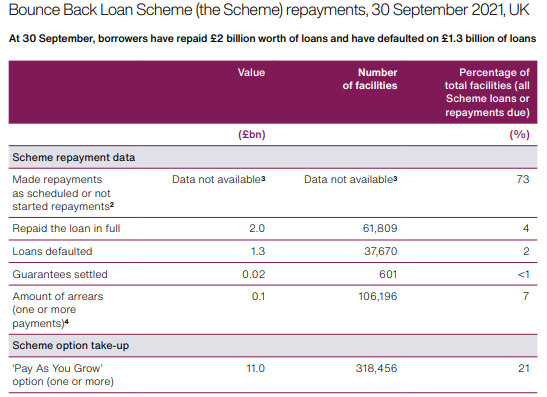 Anyway, here are the latest facts and figures related to the fraud element of the Bounce Back Loan scheme, this has come from “the horse’s mouth” that being the Patrick from the British Business Bank, Lord Agnew, and bosses from the five main BBL lender banks.

British Business Bank have changed their minds as the BBL scheme has rolled onwards and currently they have revised their estimate to 7.5%:

“In the very early days, our initial estimate was that fraud could be 10% to 20%. That is what we were thinking at the time of our reservation notice. In the BEIS annual report and accounts, we did a very detailed fraud sampling exercise, on which we again worked very closely with the Cabinet Office.

That came out with a central estimate of 11.15%. That has been subsequently revised, and much further and deeper work has gone on to those cases. That estimate is now 7.5%. The level of fraud is going down, but it is still much higher than you, I, or anyone else would be comfortable with.”

Barclays have stated that right now the figure they have is 1.5%. However, they have gone on to say that the figure could rise to 7.5% if everyone who (they suspect) inflated their turnover did not pay them back, it might go up to that. When they look at the book today, there are people they think may have inflated turnover who are paying them back.

Santander have said levels of fraud with them re the BBL scheme is less than 1%.

NatWest have said, based on current data it is about 2%

HSBC say it is currently at 1.81%, which is quite an exact figure.

Lord Agnew in his most recent public appearance has said “he has not got a clue” when questioned at the BEIS Strategy Committee meeting:

“I have not a clue. Why? Again, this is the frustration. We are not getting any data. When I did my question and resigned, I was given a piece of data that said we had paid out something like £960 million on the guarantees—this was at the end of January—and of that £220 million had been for fraud. So 220 is nearly 25% of 960. It does not necessarily work like that; of course it does not, but we are all blind, and we should not be blind.

The data should be there. They keep saying that the scheme is too fresh for data. That is rubbish as well. About 70% of the loans went out in those first couple of months: May, June, July of 2020. There was a 12-month holiday on payments, so you could say, “There is no visibility on performance then,” but from June of last year there would be data. Where is it?”