Rishi Sunak finally got around to announcing the next round of financial help that would be on offer yesterday to help us battle through the new round of restrictions that are going to be tying the hands of business owners across the nation for possibly the next six months.

Trying to make sense of his speech is not easy of course, but one thing that is easy to spot today, and that is the amount of negative press he is receiving for some of his announcements yesterday.

I will concentrate my attention on Bounce Back Loans, as that is what I am here for, so let me give you a round up of what he did announce and what that will mean for you.

A few days back Boris did drop some cryptic hints in a speech that the Bounce Back Loan scheme would be extended:

I also worked out days before yesterdays announcement by Rishi that many people would miss out and be declined their right to get a Bounce Back Loan if additional banks did not open up their BBL schemes to new customers and the scheme was not extended. 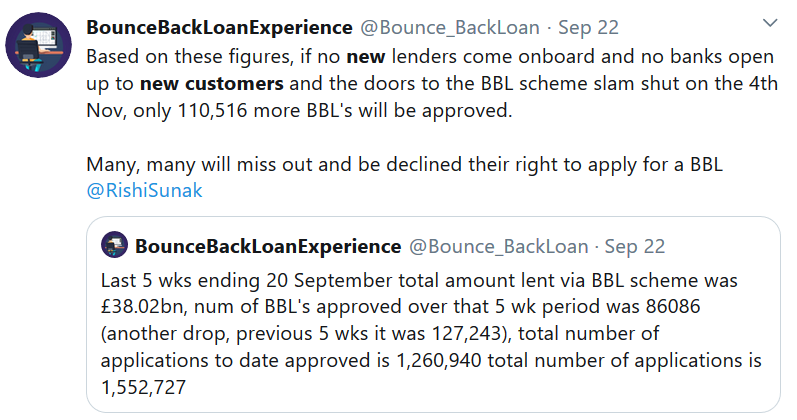 Well long story short the Bounce Back Loan scheme has now been extended, but still no sign of either any new BBL lenders coming onboard just yet and disgusting only 6 of the 28 current BBL accredited lenders are accepting new customers. In fact, two of them have or will very shortly be running out of money to lend.

The Bounce Back Loan scheme has been extended to November the 30th as I announced days ago with banks having until Dec 31st to then process any remaining BBL applications they have in their systems.

Declined the Right to Apply for a Bounce Back Loan

I stand by my statement about many people still missing out on BBL’s even with the extension of the closing date of the scheme, unless those people unable to get a bank account to allow them to apply for a BBL get one.

Also, continued errors and mistakes by many banks are also seeing people being declined the right to either apply for a Bounce Back Loan or get one. I have a growing list of those errors which sadly the British Business Bank, Cifas and Banks are smugly ignoring it appears.

My growing list of such errors are well documented and will come back to bite the arses of those responsible, so sit there and be smug those responsible if you like, but you have opened a can of worms with ones such as this corker below:

“Hard of Thinking” Bank Employees Interpretation of the Rules:

Extending Repayment Time for a Bounce Back Loan

You will shortly be given the option of extending the length of your Bounce Back Loan(s) from six years to ten years.

As Rishi says that will reduce repayments down to almost half of what they were initially going to be.

Is that a good thing, well he says it will help with cash flow for any business that has such a loan, but only cash flow going out, if these Covid related restrictions continue or a full blown lock-down gets put into place cash coming in is not going to be there for some businesses.

You need cash coming in not only cash going out to have cash flow of course.

He should have turned them into grants and still could do at some point in time in the future.

The banks obviously hate BBL’s, business owners do however need them but getting hold of a Bounce Back Loan still remains a problem for many business owners due to the reluctance of the banks to open up new business bank accounts for non-customers.

Results of a quick poll I held before Rishi’s announcement: 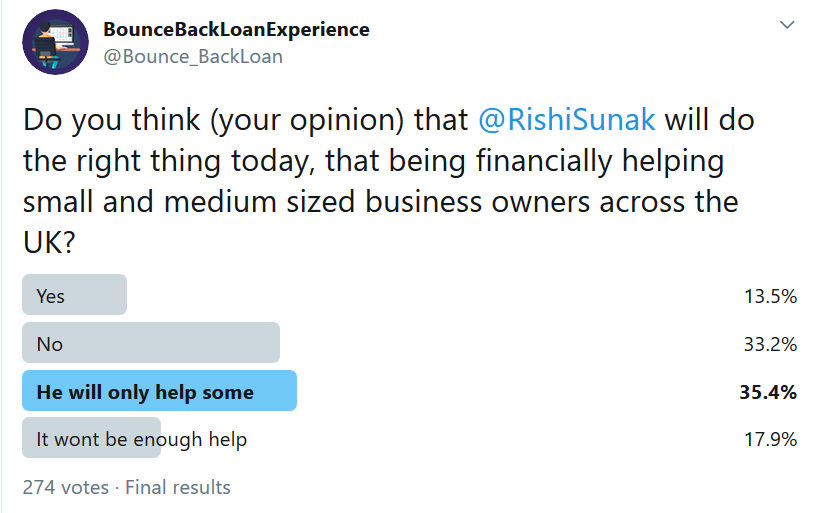 Pay as Your Grow – Payment Holiday and Interest Only Periods

Other changes to the Bounce Back Loan scheme will see interest-only periods of up to six months and those being allowed to be taken up to three times during the length of their loan and a payment holiday being offered.

However, it must be noted that to make use of a payment holiday you will have had to have made at least 6 months’ worth of repayments.

That is hardly “Pay as You Grow”.

However, he did say that anyone taking a Bounce Back Loan repayment holiday or opting to take an interest only period would not see their credit rating being affected by doing so.

Pay as you Grow – The government will give all businesses that borrowed under the BBLS the option to repay their loan over a period of up to ten years.

This will reduce their average monthly repayments on the loan by almost half. UK businesses will also have the option to move temporarily to interest-only payments for periods of up to six months (an option which they can use up to three times), or to pause their repayments entirely for up to six months (an option they can use once and only after having made six payments). These changes will provide greater flexibility to repay these loans over a longer period and in a way that better suits businesses’ individual circumstances.

Rishi also said “I am also extending the deadline of all our loan schemes to the end of the year. And we are starting work on a new, successor loan programme, set to begin in January.”

Does that mean a Bounce Back Loan 2 scheme is in the making? We will have to wait and see I suppose, for he hasn’t even given it a name yet, never mind put together the finer details of that scheme.

However, so any new loan scheme isn’t the complete cock up and shambles the Bounce Back Loan scheme has become, I have offered him the voices of come of my followers, so they can let him know of the problems they have faced and still face trying to get a Bounce Back Loan.