Having now spoken to more people than I can remember about Bounce Back Loans and the problems they experienced and still are experiencing; I have made the following additional submissions to the National Audit Office regarding turnover figures on BBL applications as it needs addressing. I feel certain aspects are currently unfair if not illegal.

I have sent a communication to the Executive Director at the National Audit Office, to alert the leader of the team currently performing the current second investigation into the BBL scheme to the following additional submissions for their investigation, and trust they will be looked into and addressed and no BBL recipient will be made to suffer in any way due to the following:

The first is regarding turnover figures to apply for the Bounce Back loans, it was the case that some lenders were promoting the turnover aspect of the scheme as being “an estimate” an example of which can be found below with Santander who displayed this on their website (in fact upon checking today it was still there): 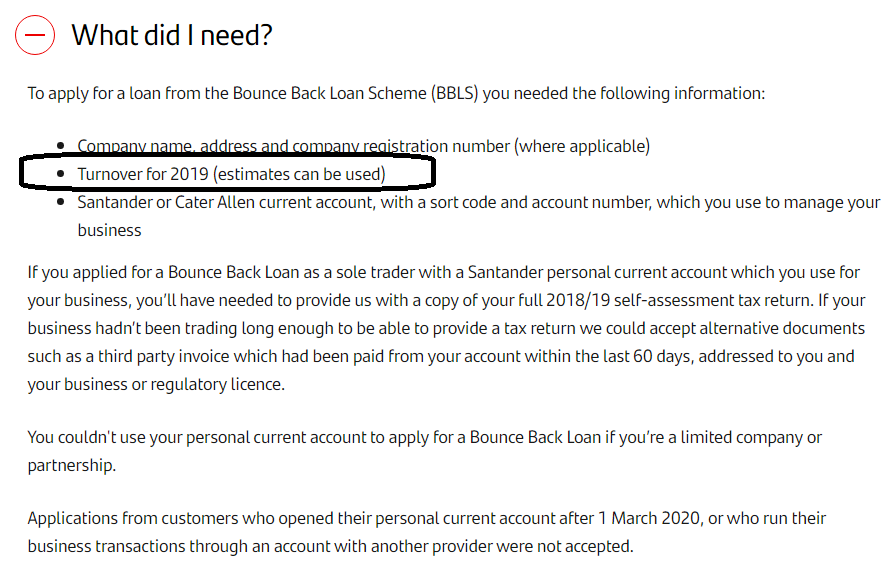 Shockingly, when the British Business Bank took part in a recent presentation bestowing the supposed virtues of the Recovery Loan Scheme to brokers and letting them know how much cash they can earn in commissions/fees, they commented, on their official literature for that event that they had been aware of Bounce Back Loan lenders who had promoted covid loan schemes in a manner that neither befits the rules or the spirit of the facilities.

The above example from Santander is surely a clear example of that and one must ask why it is still up on their website now, even after the scheme has ended. Here is the respective part of their literature. Misleading those applying for a Bounce Back Loan is a scandal and not one single person who may have been confused or misled about their turnover figure should be made to suffer. Why did the British Business Bank not get them to remove it, but it is now way too late the damage may already have been done. 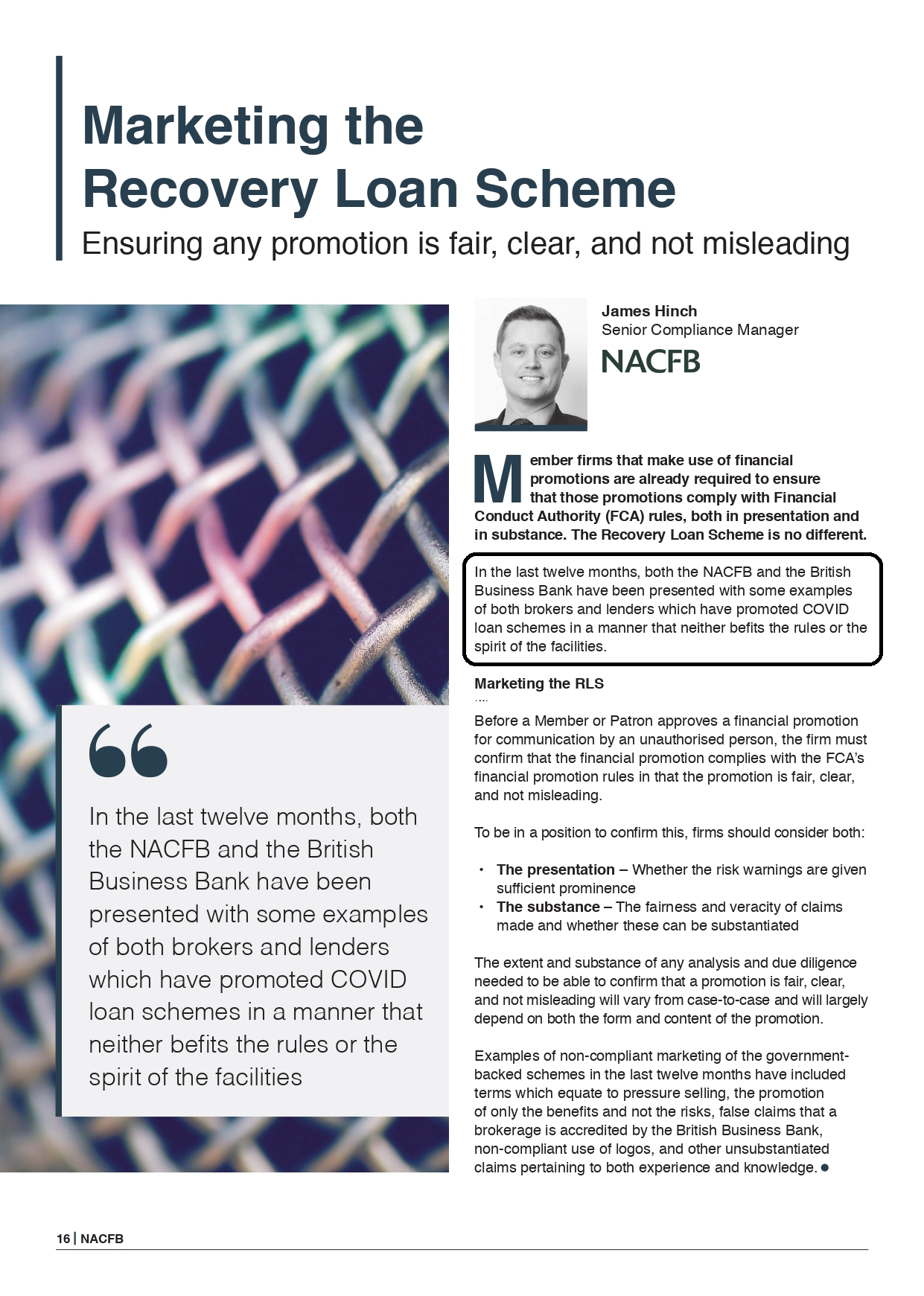 That did cause confusion, as too did the fact that the turnover figure was meant, it turns out, to be for the calendar year 2019 but was badly worded as some thought it was the 2019 tax year turnover.

Which meant people may have applied with an incorrect turnover figure, thinking they had done no wrong.

Also, when top ups were permitted those who were allowed to estimate their turnover, which according to the scheme rules were the newer businesses they could not amend their estimated turnover figure when the top up element of Bounce Back Loans went live, even if they now knew their actual turnover figure.

So, by the very design of the scheme, they were forced to have to apply for a top with an incorrect turnover figure.

Therefore, they could, based on the letter below sent out to lenders (telling them to report “fraud”) be accused of some sort of “fraud”. The word “knowingly” is used in the highlighted section and that I feel is open to abuse by banks much more so due to the confusion surrounding the rules and the additional top up rules, and they may accuse someone or report them of this alleged fraud when it was caused by the rules of the scheme or confusion surrounding it or as the British Business Bank very clearly and without a shadow of doubt claim was by lenders promoting covid loan schemes in a manner that neither befits the rules or the spirit of the facilities: 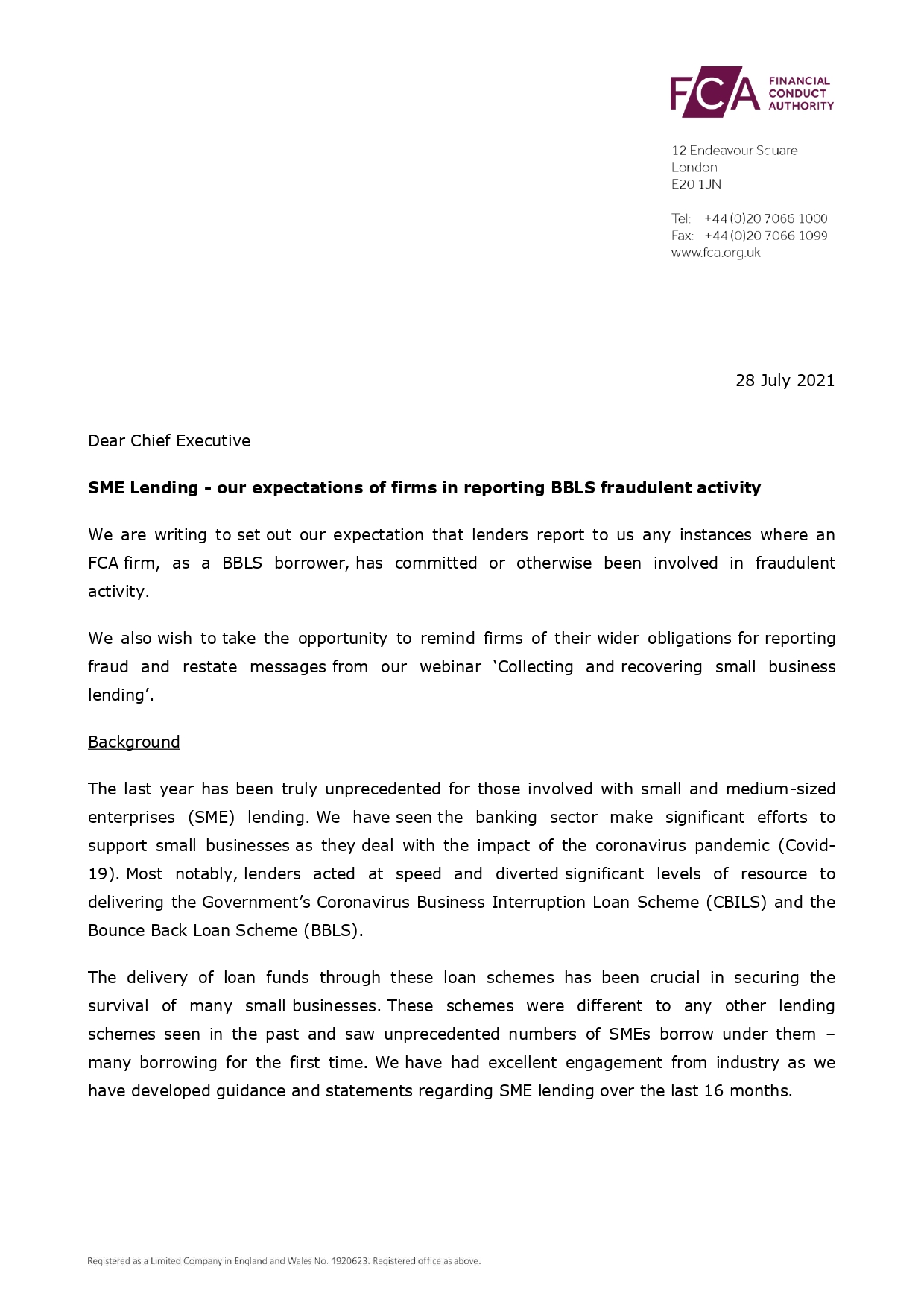 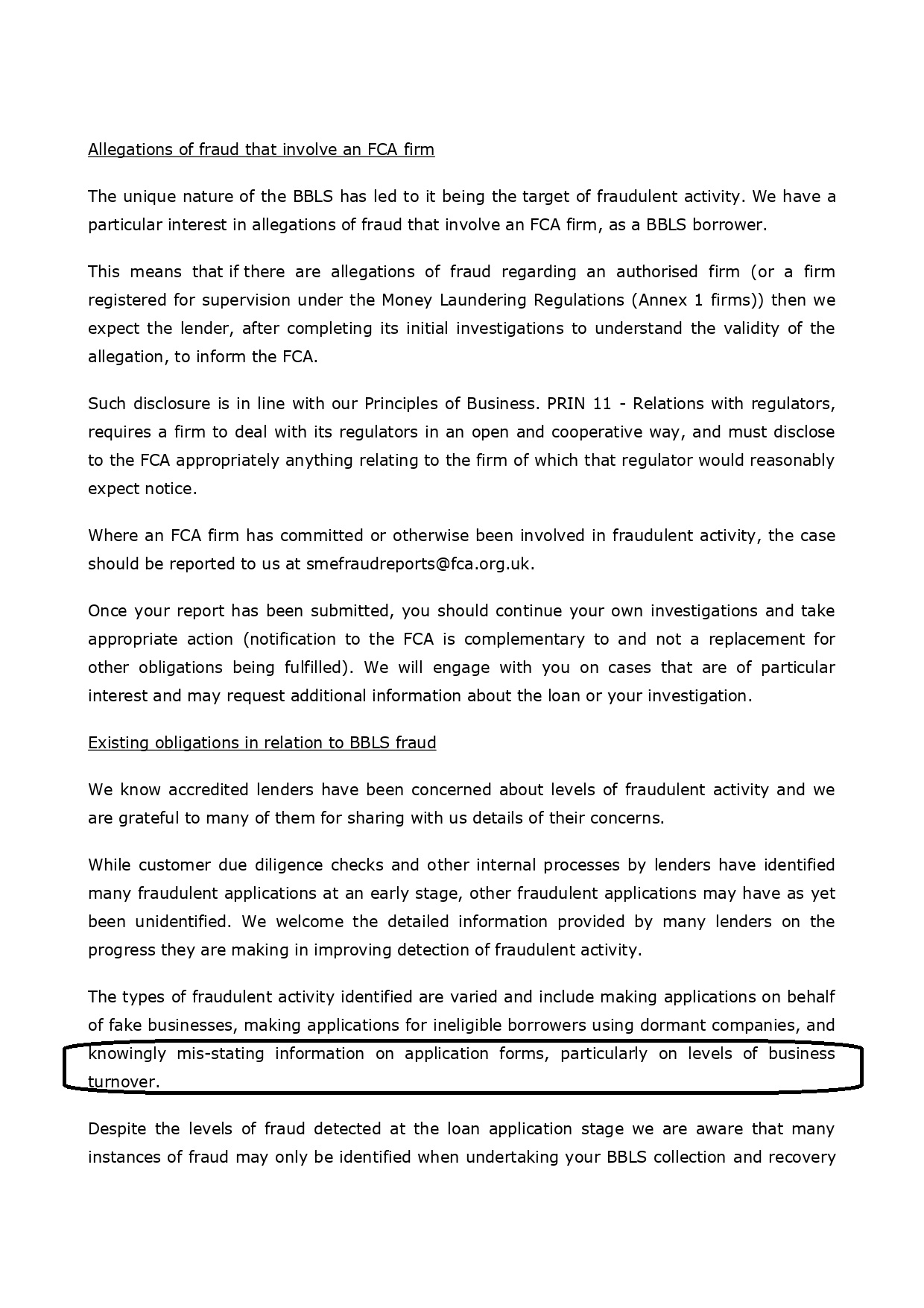 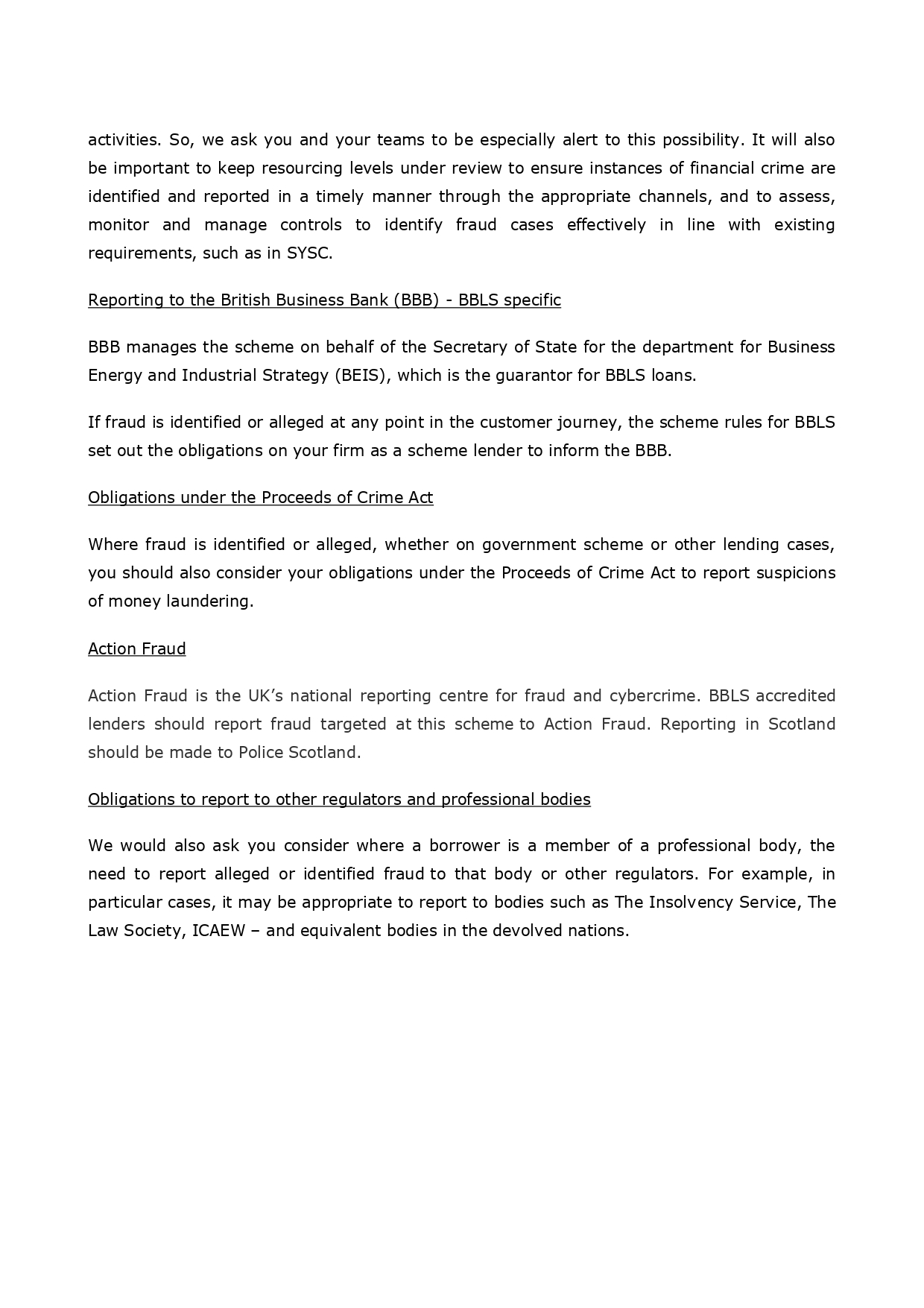 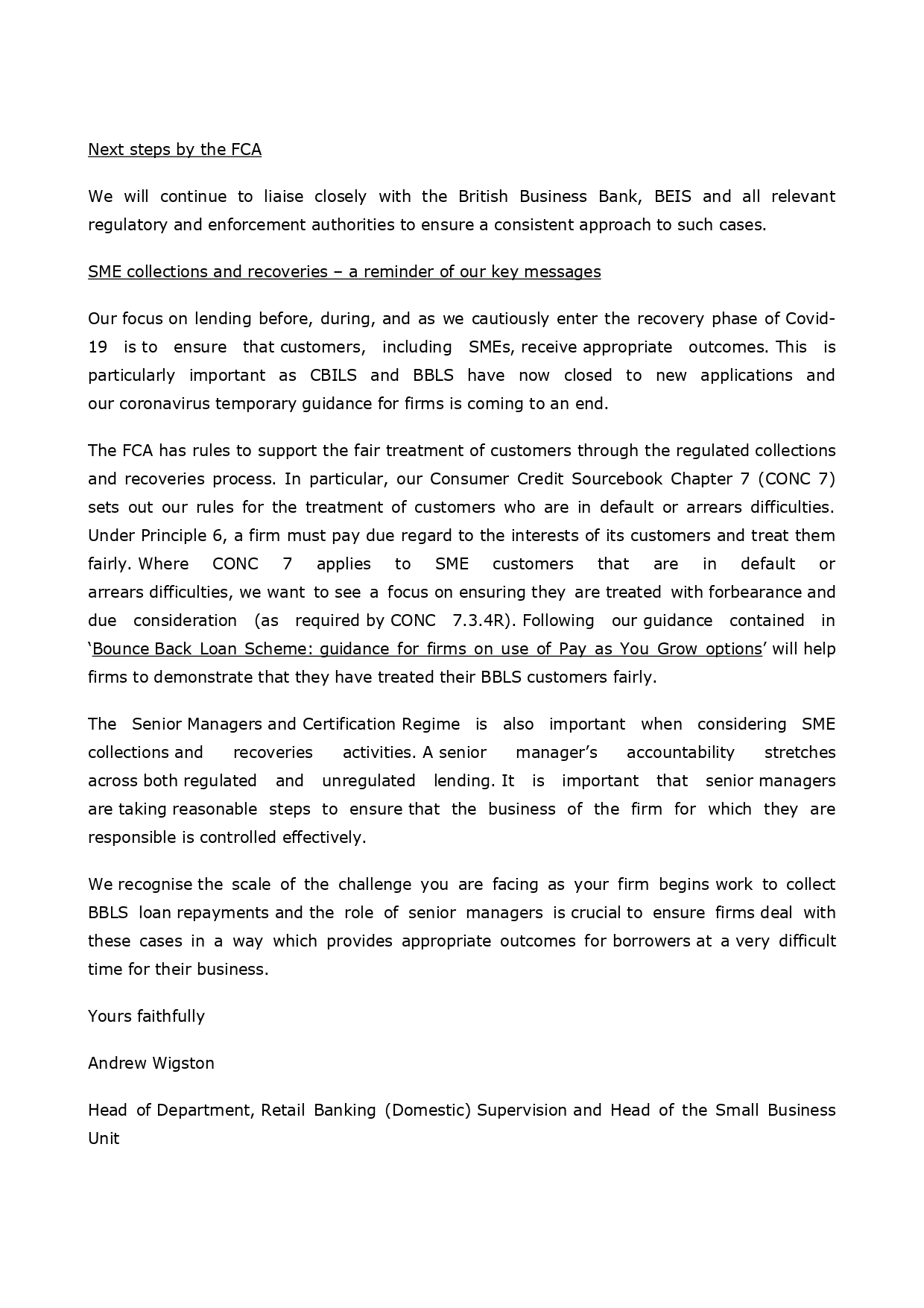 This huge legal problem was pointed out to the British Business Bank. Ministers and MPs via Social Media at the time, many times by those worried about it, to no avail.

The utter stubbornness and the refusal to allow those applying for a top up to amend their turnover figure (higher OR lower) if then known, cannot be legal by any stretch of the imagination, and leave those who had to apply by those with a knowingly now incorrect figure open to accusations of fraud?

I would suggest an urgent review of this is instigated as you cannot tell lenders to report alleged fraud re an incorrect turnover figure when both the way the lenders advertised the scheme, the confusing rules of the scheme and the fact those wanting a top up were forced to possibly give incorrect information to get one, by the rules of the scheme.

In fact, in light of the British Business Bank stating what they have above, I would urge the National Audit Office to look into or recommending prosecuting bank employees who are subject to the FCA’s CONC guidelines, as by their very actions they have breached them.

I do worry though that with so many MP’s, Government Ministers and/or Members of the House of Lords with financial interests in those lenders it will not be taken seriously and brushed under the carpet so to speak, that must NOT be allowed to happen.

Oh, and HSBC for the record were causing added stress and mental strain to those applying for top ups by sending out EchoSign’s dated 2080/2081 instead of 2020/2021 therefore meaning those sent one had to wait until the error was spotted (if ever) and a new EchoSign issued. 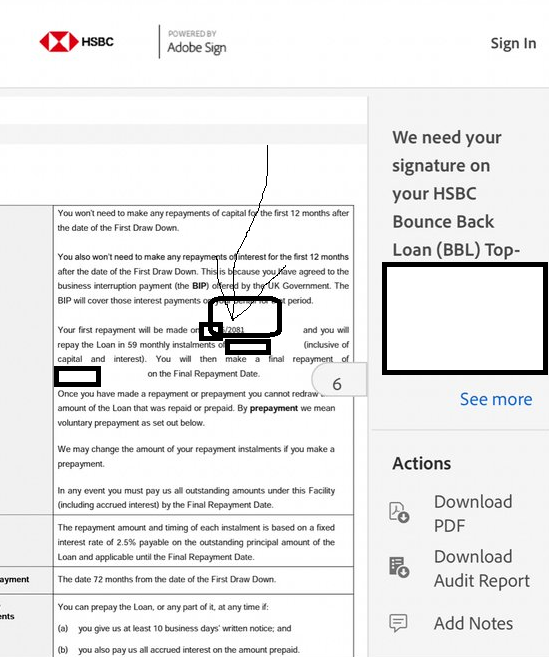 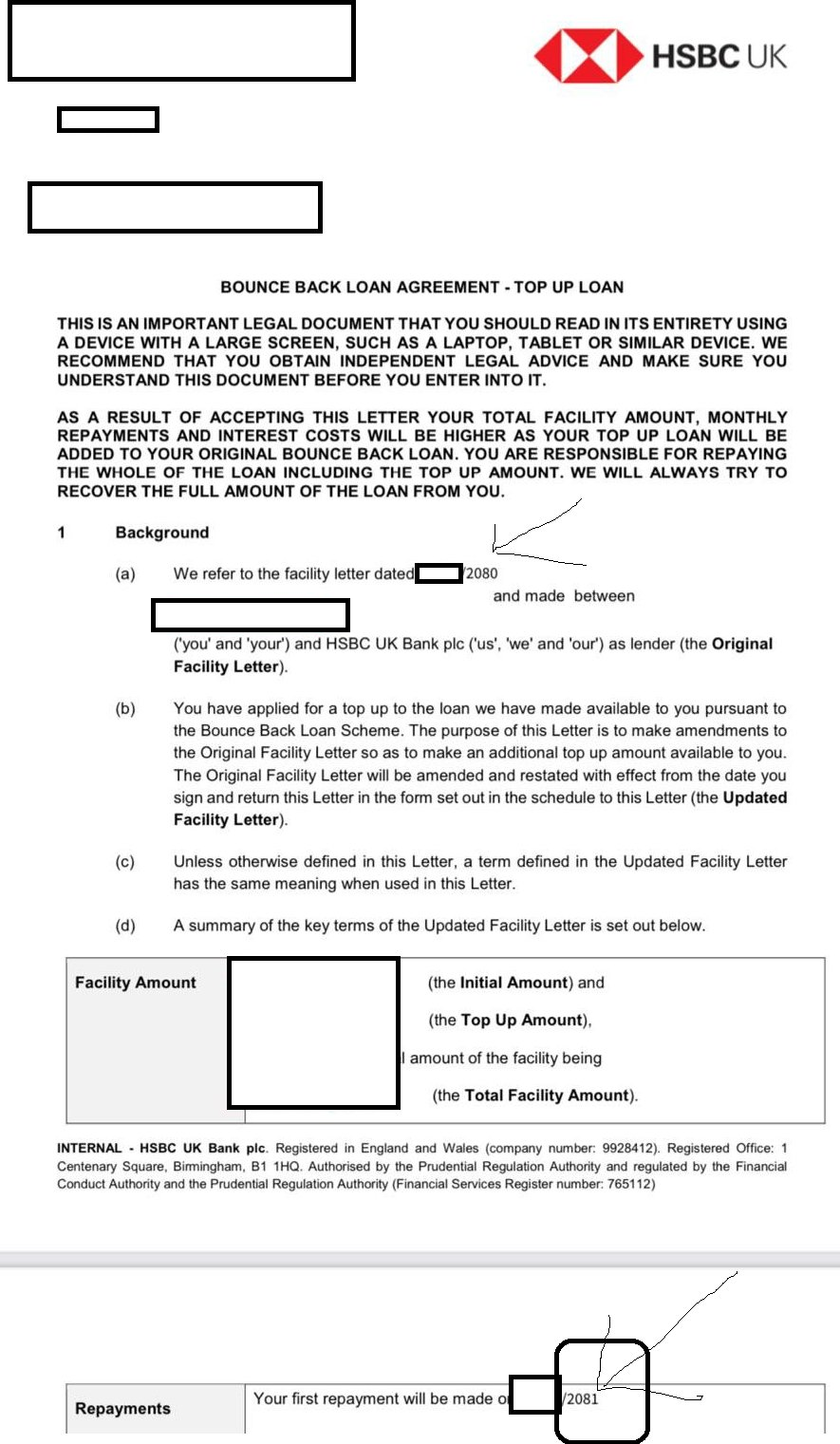 I alerted the British Business Bank to the delays who appeared uninterested in the delays and replied with the following: 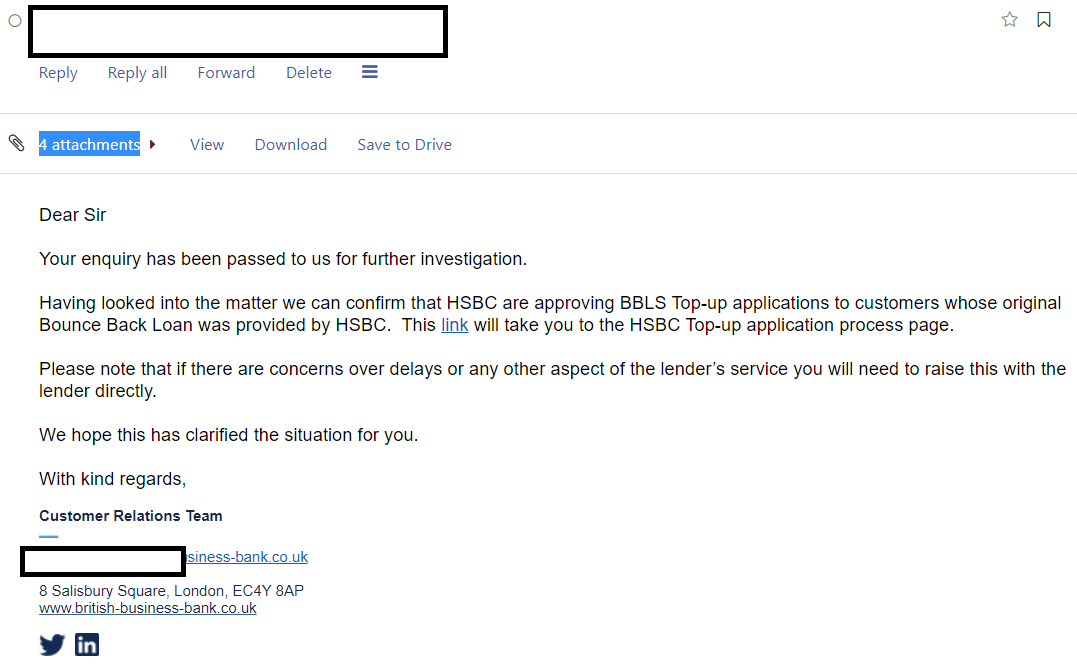 Perhaps they should have investigated fully what the delays were caused by, as beyond any reasonable doubt many were caused by HSBC errors as seen in the document above. Completely unacceptable given the urgent nature of the top up scheme and businesses needing funds quickly.

It was also heart-breaking hearing from many business owners who wanted a small modest top up only to find the minimum amount they could apply for was £1000, which meant several I spoke to sadly missed out on the opportunity of a possible business saving top up as the amount they could claim due to their turnover less the amount already applied for via the initial BBL was slightly under the minimum amount and they were tossed aside like a used tissue by lenders unable to offer them a top up of less than £1000.

It could be said that Rishi Sunak, Sam Beckett and Alok Sharma were guilty of Misconduct in Public Office by not designing the scheme in a clear cut way and leaving innocent and vulnerable business owners open to false accusations of fraud and having to sign away their legal rights when applying for a BBL as stated in the Reservation Letter by the now ex-CEO of the British Business Bank.

The fact that BBL borrowers could not amend their turnover figure to a possibly now known one is also a failing of bank bosses commitments to abide by CONC regarding treating their customers fairly, as per FCA rules on the BBL scheme.

I would also draw your attention to the following footage which shows several bank bosses trying to make sense of the aspect of turnover and as you can see their words add more confusion as they all seem confused and appear adamant the Government will pay the guarantee if turnover is wrong, one calls people fraudsters and mentions lying when that may not be the case, as someone may have estimated their turnover as they may have felt they were allowed given all of the above.

One even mentions checking accounts post draw down for turnover irregularities when her very bank was promoting “estimated turnover” (Santander image above), very strange.

The fact that some people may have overestimated their turnover and got it wrong as they were confused when applying, and as you have read the above you can certainly see why they would be confused, and are now, due to the extended pandemic, worried about repaying a Bounce Back Loan back, they should be given additional options surely, and not treated as some common criminal which they are most certainly not.

Another worrying error which appears to have been made, this time surprisingly by the Office of the Parliamentary Counsel was in regard to the removal of legal rights for those applying for those loans and the request to seek legal advice before applying for a loan which lenders put on their website along with supposed disclaimers.

When anyone did research for such, many would of course head over to the Government website and see what those Government Lawyers had said about the scheme.

They would not be able to access all of the respective important information for it appears they made a mistake regarding that Statutory Instrument.

That error was corrected it seems over a month after the launch of the scheme via their “Correction Slip”: 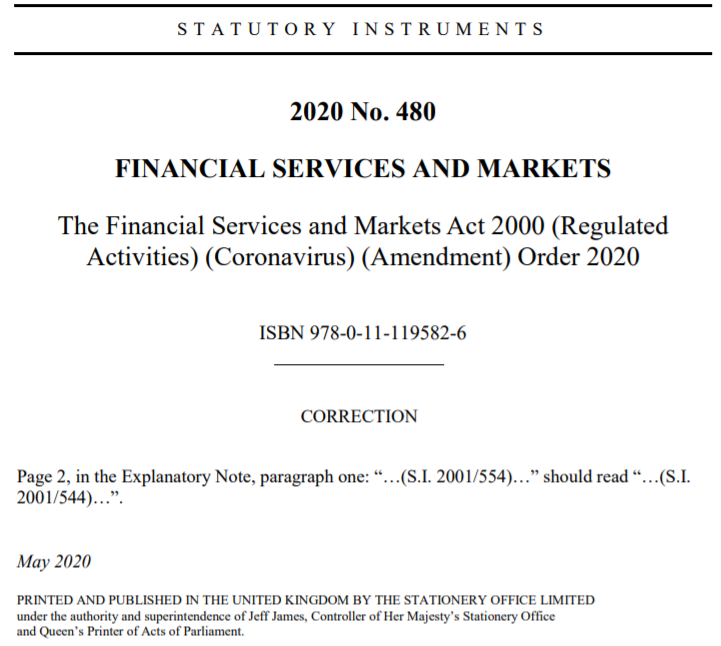 That needs investigating for those seeking legal advice from the very people tasked with writing that legislation (the Office of the Parliamentary Counsel’s team of Government Lawyers via the Governments own website) they would not at the time, in the early part of the scheme have realised that they had given out incorrect if not erroneous information with its incorrect wording, and would not be able to locate all of the information they needed to make a decision on their loan application, and those responsible must be held to account for doing so.