In a feeble attempt to fill Bounce Back Loan borrowers with some hope that they do have one route they can take if they have a complaint with a bank, the British Business Bank have the following emblazoned on the BBL FAQ section of their website

“What if I want to complain about my loan under the Bounce Back Loan Scheme?

If you need to make a complaint you have the option to contact the lender who will be able to give you details of their standards complaints process and, if you are not satisfied, you can contact the Financial Ombudsman Service.”

Seems quite straight forward it would seem. That is until you may suddenly find your business bank account blocked and you have no access to the funds held in that account, and possibly your savings and personal accounts at that bank blocked too.

I have seen more than enough letters forwarded to me by BBL borrowers who have out of the blue had their bank accounts blocked with the bank then refusing to comment on why, apart from saying their account(s) are being reviewed.

When in that position you can kiss goodbye to being able to access your funds until that “review” is complete and the account is reopened, but sadly many people are discovering to their cost their accounts do not get reopened, their funds are snatched to repay a BBL they have been given.

The banks often refuse flat out to explain why the above has happened and will direct the customer to either make up any difference of the funds that have been snatched and the value of the BBL or face “collection proceedings” or they have 6 months to take their case to the Financial Ombudsman Service.

So, when faced with instant financial paralysis from a bank blocking their accounts, many will head on over to the Financial Ombudsman Service website and follow the instructions for submitting their complaint and will do so, in the hope that sense will prevail and not only will they get their funds restored but they will be given an explanation of why they have been treated the way they have and why their account(s) were locked, and funds snatched.

However, would you believe that situation is something that the FOS have admitted they will not investigate and anyone with a complaint such as that not only faces long delays in getting a reply from the Financial Ombudsman Service but also faces being told the FOS will not do anything to rectify it.

The banks are aware of that fact and have been using it to snatch back Bounce Back Loans if they suspect wrongdoing, but be aware that many banks have made error after error when it comes to the BBL scheme and have even made up non-existent rules in the past. Therefore, even if a bank does make an error and snatches back your BBL or whatever funds you may have left in your business account they have a simple loophole to do so, knowing the FOS will do diddly squat.

Things to Be Aware Of

You will often find a rule similar to or identical to the following on your loan agreement with a bank you took out a BBL from:

I have yet to see a bank do what is stated in the last sentence above….

Banks do make mistakes and will rarely admit they have done so, below for example is a non-existent rule Barclays made up regarding the BBL scheme.

A customer of theirs applied for a BBL with them and they declined it, telling them that even though they had applied initially with another bank for a BBL and did not get a BBL the fact they applied with the other bank means they cannot get one from Barclays as the non-existent rules of the scheme state you can only apply once:

(read more on the above Barclays nonsense here >> https://mrbounceback.com/are-barclays-finally-aware-of-the-bounce-back-loan-rules/ )

Here are the actual rules:

Can I apply again if my application under the Bounce Back Loan Scheme has been declined or withdrawn?

If a business’ application is declined or withdrawn, then the business is able to make a further application under the Scheme to another accredited lender. Lenders are required to confirm that the first application has terminated without loan approval/drawdown, and this may require evidence to be provided by the business.

“This service won’t generally intervene in a bank’s commercial discretion when reviewing and subsequently blocking accounts.”

An example of that coming into play can be found on the following complaint: 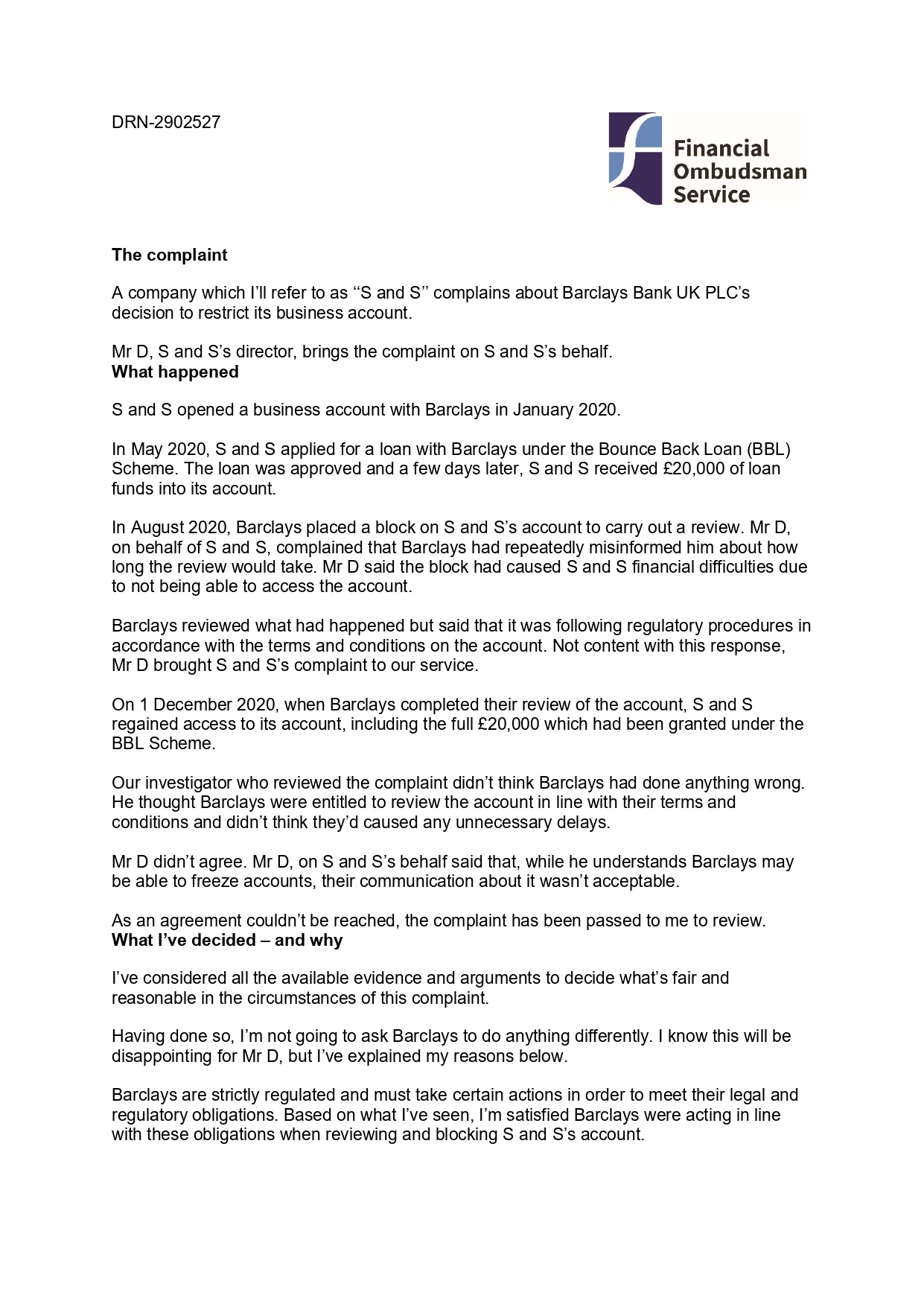 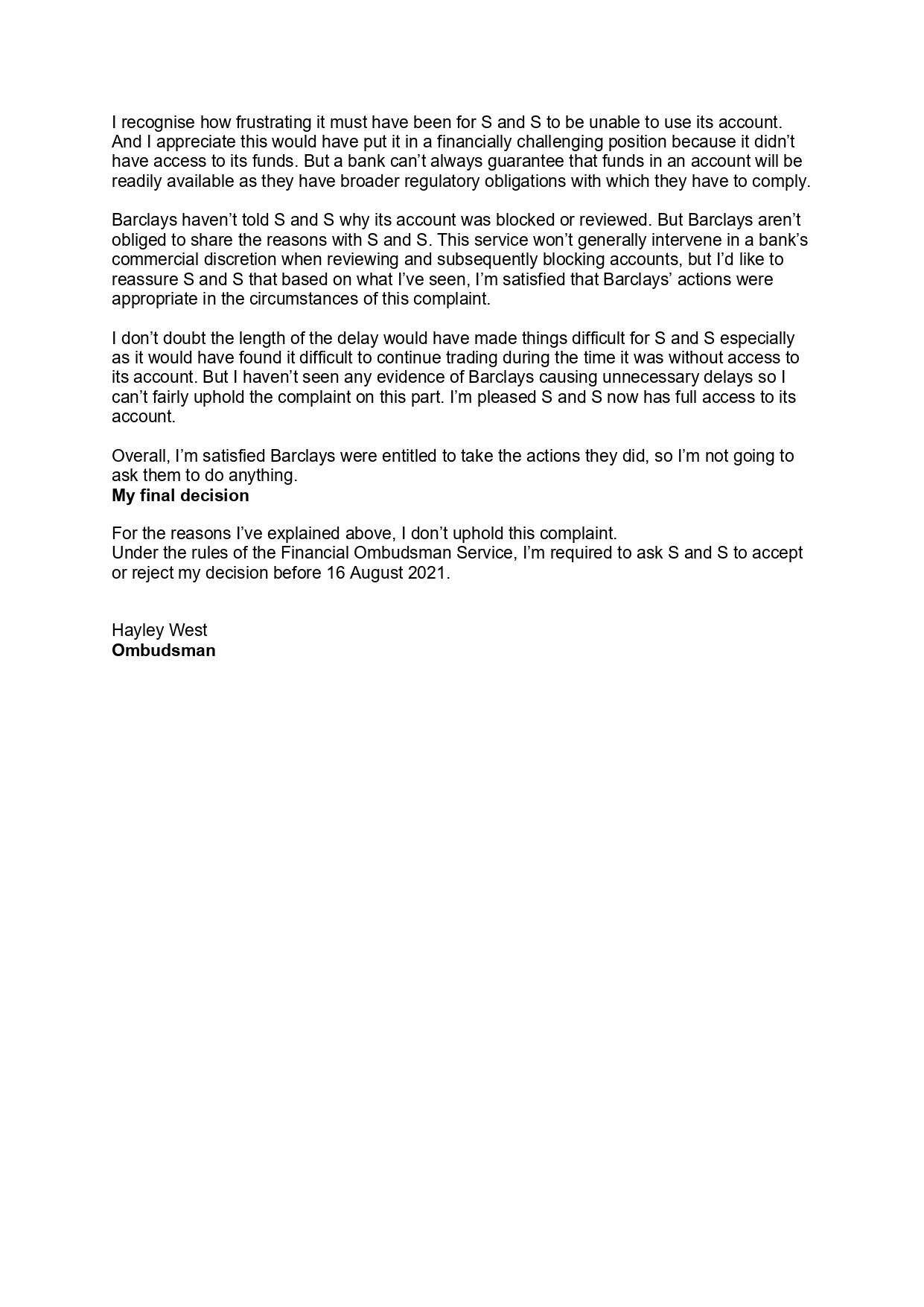 Just be aware of the above, for banks, the British Business Bank, Government Ministers and even MPs will say head on over to the Financial Ombudsman Service if you need help with a bank messing you about when it comes to a BBL, but it appears they won’t help if the bank has blocked your account and snatched all your funds, and they are pulling that stunt day in and day out. Nice one Rishi…..