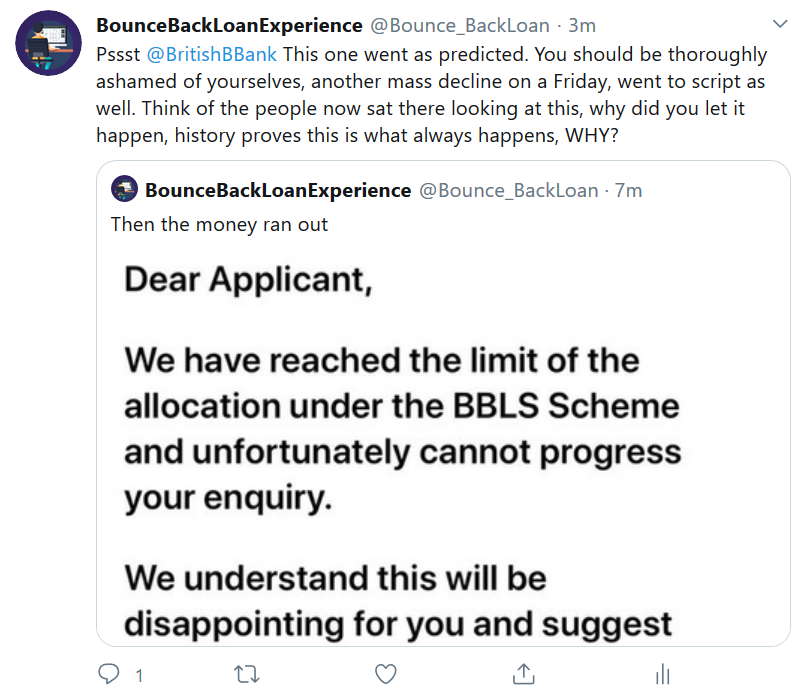 Today’s news update is more of a timeline and overview of the scandal for want of a better word that has been playing out over the last few days with the latest British Business Bank Bounce Back Loan accredited lender Conister.

I urge you to forward the URL of this page to your MP, so they can read it, digest it, make sense of it, and take whatever action they can to alert those responsible for allowing this to happen, and hopefully get it fixed, as it could happen again.

If you retweet this story on twitter (which I will tweet several times during the day) to your MP, I will put together a list of each of them and keep track of their expected positive (or otherwise) responses and will publish them tomorrow.

I have started the ball rolling:

To any MP reading this, I am more than happy to give you a phone call at any point in time today to discuss this matter. For reference I have spoken at length to the National Audit Office BBL audit team  previously, hence the latter part of my tweet above.

Conister were accredited as a BBL lender just over a week ago, and unlike all other previous lenders allowed anyone eligible for a Bounce Back Loan to apply for one with them.

This may be a slightly long read, but please go through it and you will see how things have played out and you will spot the very obvious problem or flaw in the Bounce Back Loan system that is causing people to be declined for a BBL erroneously, and you do not need me to tell you the stress and anxiety and financial hardship every single decline is causing people.

When Conister started sending out their Bounce Back Loan application forms many people reported, myself included just how very confusing and badly written sections of their BBL application form were: 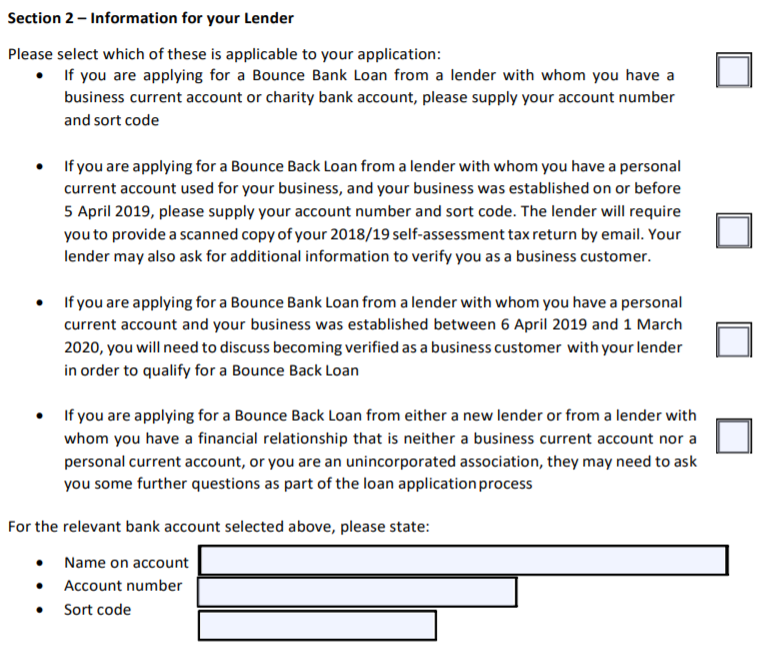 I ran a poll to see what others thought of that section:

At the foot of the application form was a questionnaire that many people did not fill in as a question above it led people to believe it did not need filling in: 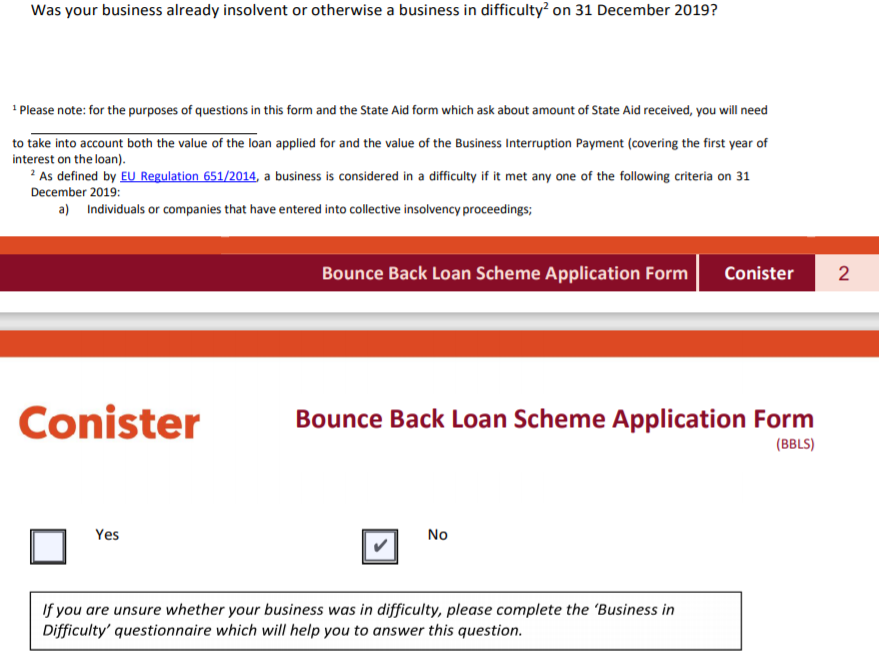 However, staff processing the application forms contacted customers advising them that it did need filling in:

Here are the initial questions of that questionnaire, complete with grammatical error:

Conister Closes the Door for Applicants

Many people who had applied for application forms then started to contact me telling me they had not received the forms,  or had been contacted for additional information such as their date of birth, asked to fill in the questionnaire or noticed the standard KYC soft search on their credit files.

Once again, I ran a quick poll to give everyone an idea of the percentage of people who had experienced the above: 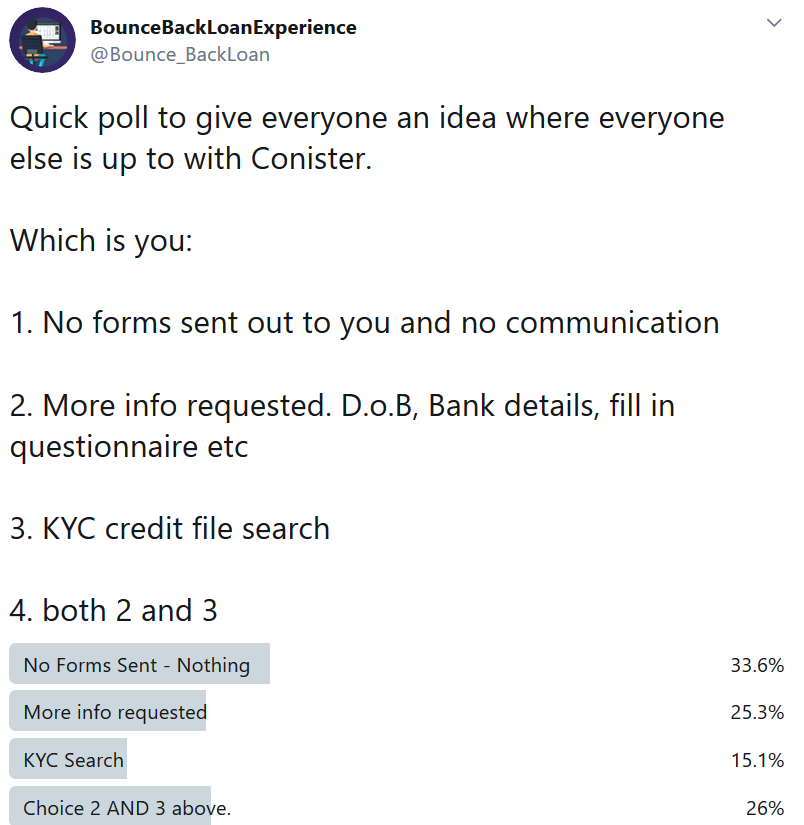 Conister, closed their application process at around 09:00 on the 3rd of September, with the following being displayed on their website:

I had been alerted by people following me on Twitter that Conister were declining people for having a Northern Ireland or Scotland based business.

Now, that was somewhat strange, so I alerted the British Business Bank, who responded with the following:

Those who had been erroneously declined were then contacted by me and in turn by Conister, letting them know their decline was over-turned and their BBL application would now be considered.

Yesterday, a flood of other Conister applicants contacted me with messages telling me they had been declined by Conister, I asked everyone I could to try and get the reason for their declines.

One common reasons for a decline, that they were declined for having a Bounce Back Loan already or having applied for one elsewhere.

I am aware that applicants are 100% permitted to apply for a BBL when they own more than one business as long as they fit the criteria, so double checked this is still the case with the British Business Bank, their reply is below: 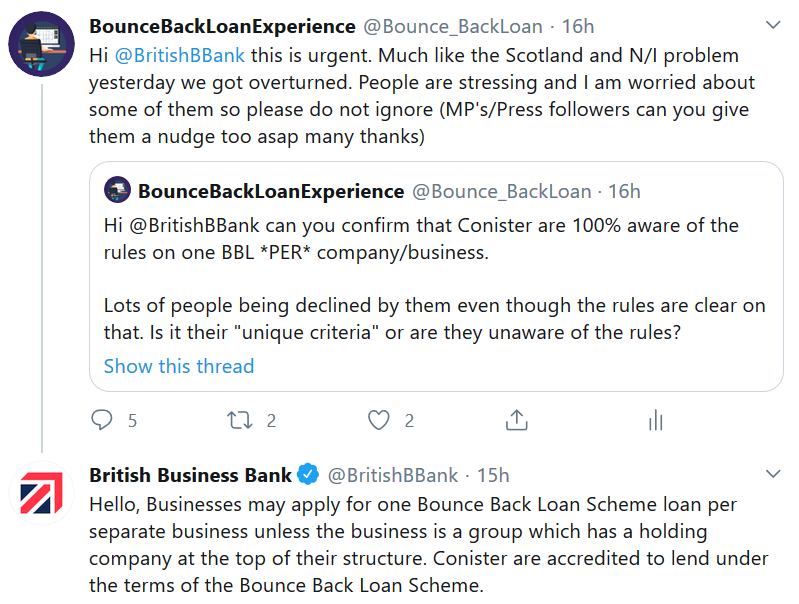 However, I am also aware that some banks, have bolted onto their BBL criteria their own criteria which states even though the above is correct their system will not allow someone with more than one business to apply for more than one BBL with them, Starling Bank being the case:

The above is of course the banks right, so that may have been the case with Conister, however it soon became apparent that was not the case with some people declined: 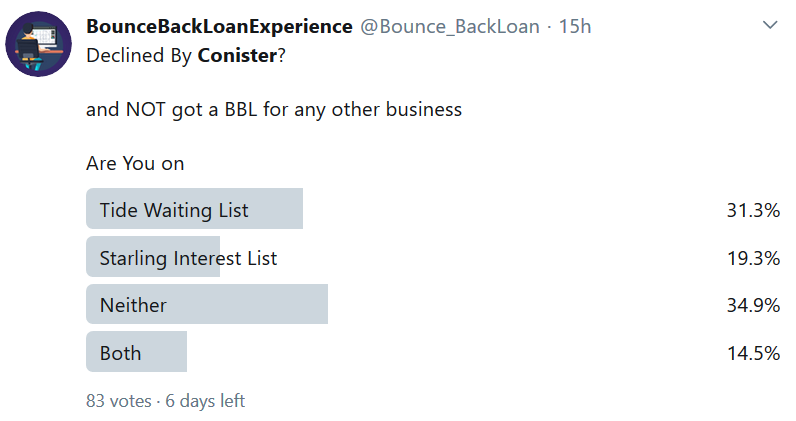 Some lenders such as Tide and Starling Bank have a “waiting list” or “interest list”, due to the volume of applications they have or had, and once again that is their decision as they have chosen to instigate such to allow them to manage applications in an orderly way.

Starling for example tell people on their “interest list” they are not guaranteeing people on that list a BBL, and Tide had to close their waiting list due to them running out of money to lend.

However, I have been inundated with people for the last few months who have applied with other banks and have initially been approved for a Bounce Back Loan, but then have been declined.

The only way to get their decline overturned with banks such as Yorkshire Bank and Clydesdale Bank for example was to contact Tide, get it in writing they had not received Bounce Back Loan and then supply that proof to the respective bank, and in fairness those banks both overturned the initial decline and went on to approve the Bounce Back Loans of people who supplied such proof.

It now appears that the reason some people have been declined by Conister have only ever been on the Tide waiting list, and as such there does appear to be a problem with the way that Conister processed their applications.

Below is one of my followers on Twitter who has given an overview of her current situation and she too was declined by Conister. (She is one of many with a very similar story):

As it stands that applicant has not received a Bounce Back Loan, and this is the reply she has got from Conister on why her Bounce Back Loan application was tossed aside like a used tissue and declined:

She would love the chance to apply for a Bounce Back Loan but has been unable to do so successfully since the scheme began, apart from that somewhat shocking experience with Conister.

Faye, who is that applicant and who has happily agreed for me to name her and give you an insight into her problem, has had this back from Starling, today: 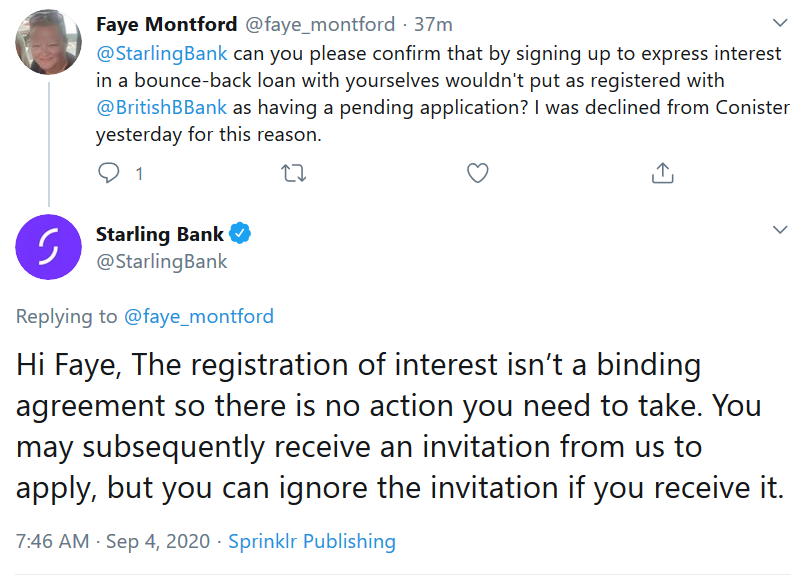 Now, this is what Tide say about their “waiting list”:

As the above applicant was only ever on the Tide waiting list, having been unable to apply for a feeder account with HSBC and never got as far as the BBL application form and never opened an account with Starling she never got as far as applying for a BBL with them, the only possible reason for her decline must be either being on the Tide waiting list or Conister have messed up again.

I should point out that by reading their statement above, there could be a chance that some banks may be using an out of date register/database/set of records to check to see if anyone has been given, applied for or even just registered an interest in or gone on a waiting list for a Bounce Back Loan, however Conister has just been accredited, so they would have access to a brand new and fully updated copy of that database/register.

Having had lots of people tell me the same thing has happened to them that therefore means that they may now  have missed out on getting a Bounce Back Loan from Conister, as that lender has currently only limited BBL funds which may now have been allocated to someone else.

That cannot be, and is not fair, much more so if once again Conister have erroneously declined her and others. An urgent investigation needs to be instigated into the above, and those who have been declined for being on the Tide waiting list or erroneously declined need their declines overturned and to be given an equal and fair chance of applying again.

Oh and just for the record: 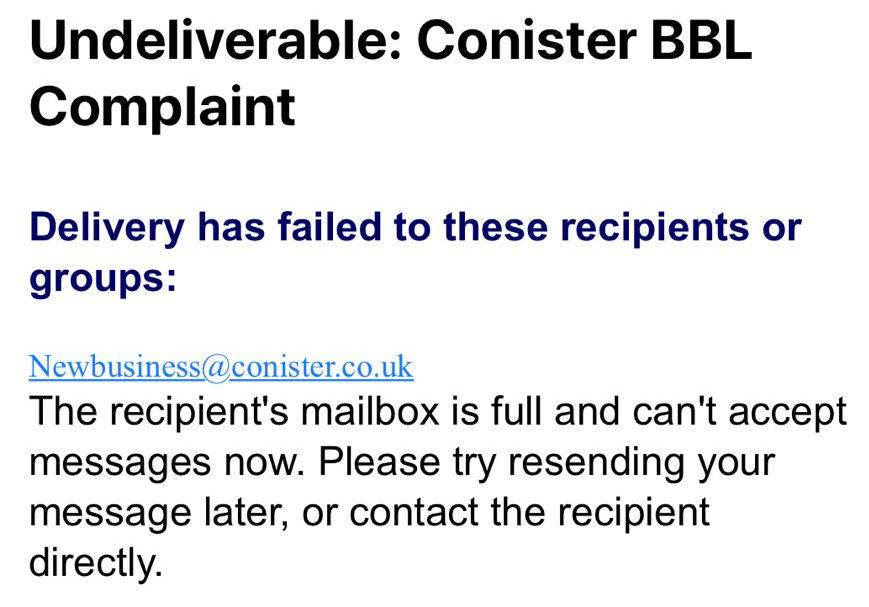