Conister now have a nice big pile of application forms sent in from Bounce Back Loan applicants that they have initially vetted, and are now ready to move them onto the next stage of the application process.

If you have applied with them and have not been sent out those application forms, you are not alone, so just hang in there as they may soon get sent out to you once they have worked their way through the ones they have received.

They are currently being watched closely by the British Business Bank and the powers that be, for in much the same way that you are pinning your hopes on getting a BBL from them if you have applied, the BBB and those in power are pinning their hopes on Conister being, what may just turn out to be the first of a handful lenders they accredit as BBL lenders, that are the answers to *their* prayers, and not just yours.

Rishi and Boris are 100% aware of the fact 100,000’s of businessmen and woman are currently excluded from the Bounce Back Loan scheme, somewhat unfairly, and the British Business Bank are fully aware of that.

In fact, yesterday at Prime Ministers Questions, Kevin Paul Hollinrake the Member of Parliament for Thirsk and Malton and a member of the All Party Parliamentary Group on Fair Business Banking stood up and told them.

Make no mistake about it, that is why Conister have been allowed to step into the arena and start offering BBL’s to anyone who is eligible. Sadly though, Conister are making mistakes currently, the one that I had to step in and try and fix yesterday was the fact they were declining people for being based in Scotland and Northern Ireland.

I had been aware since day one of the Conister scheme going live that they had been declining  people based on where they lived and knew that wasn’t right, so eventually armed with concrete evidence sent in from a good number of people who forwarded me their declined emails and/ or screenshots I let the British Business Bank know there was a problem, in my rather unique way: 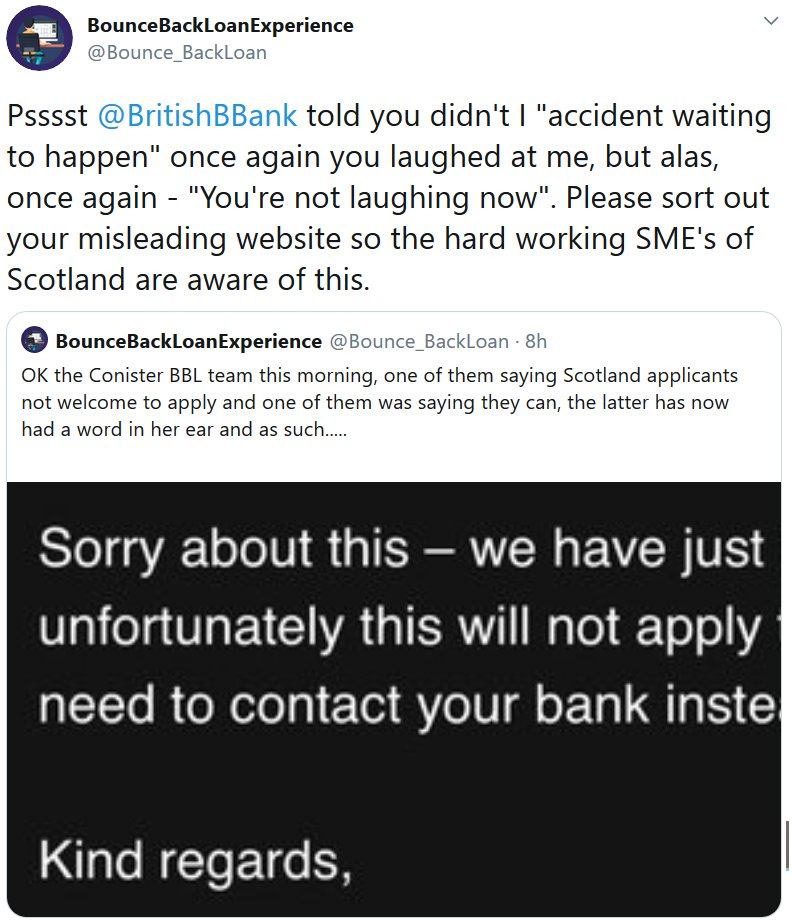 The British Business Bank, who usually ignore any tweet I send to them, miraculously jumped in with a reply, and an apologised publicly, with a direct link to the Conister website, its as if they are eager to push people towards Conister……

So, what can we make of all of this, well there are two things that could now possibly happen, Conister will move onto the next stage, that being approving people and sending out the loan facility letters and sending out the usual direct debate mandates to those they have approved, or they will approve those they are willing to lend to, decline the rest, and a “waiting list” or “interest list” will be set up.

The reason for the latter being so that they can get an increased lending limit and guarantee limit from the powers that be, as their initial £10 million limit is not going to last long. They could of course just pay out their allocated funds then do a Tide and pause lending, but ask yourself is any bank going to want to do that and face the public shame of doing so, the clues are there on the above.

Are Conister going to be declining people? Yes, and for the usual reasons and a few erroneous ones too, their short track record proves they are prone to making mistakes, even glaringly obvious ones.

Be 100% certain of the fact that the British Business Bank, Rishi and Boris do not want Conister to go down the path other lenders have, for the clock is now ticking down to the 4th of November, and if there are still 100,000’s of people excluded from getting a BBL who are eligible on that date they are going to have to extend the scheme or fiddle about with it and change a few things, or even admit defeat and close the scheme.