Imagine applying for a Bounce Back Loan, getting one, then when top ups became a thing, you applied for one and got it, only for the bank to then go on to block your account, refuse to talk to you after doing so, snatch every penny in your account and then finally tell you that you must have circumvented their banking platform to get your top up, and can kiss goodbye to the funds in your account and your BBL.

The stuff of nightmares you could say, well that is a real life story that has been playing out for around a year now for one poor soul.

Below is the outcome of a complaint sent to the Financial Ombudsman Service, and I have broken it down and inserted a few things I noticed to help you get a clear picture of the case and the outcome so you can determine for yourself whether the Financial Ombudsman Service have lost the plot, are not fit for purpose or simply side with the banks when it comes to Bounce Back Loan related disputes, despite what is staring them in the face.

A little background into the Financial Ombudsman Service:

“Not Fit for Purpose” 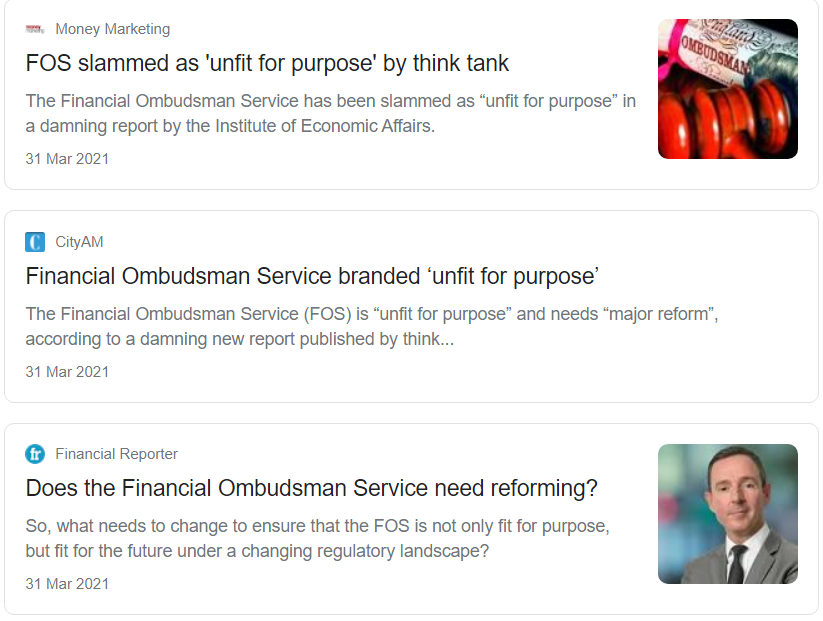 Anyway, I digress let us get down to the nitty gritty of this case, grab a coffee (not you Rishi, you may end up spitting it out) and let’s move on: 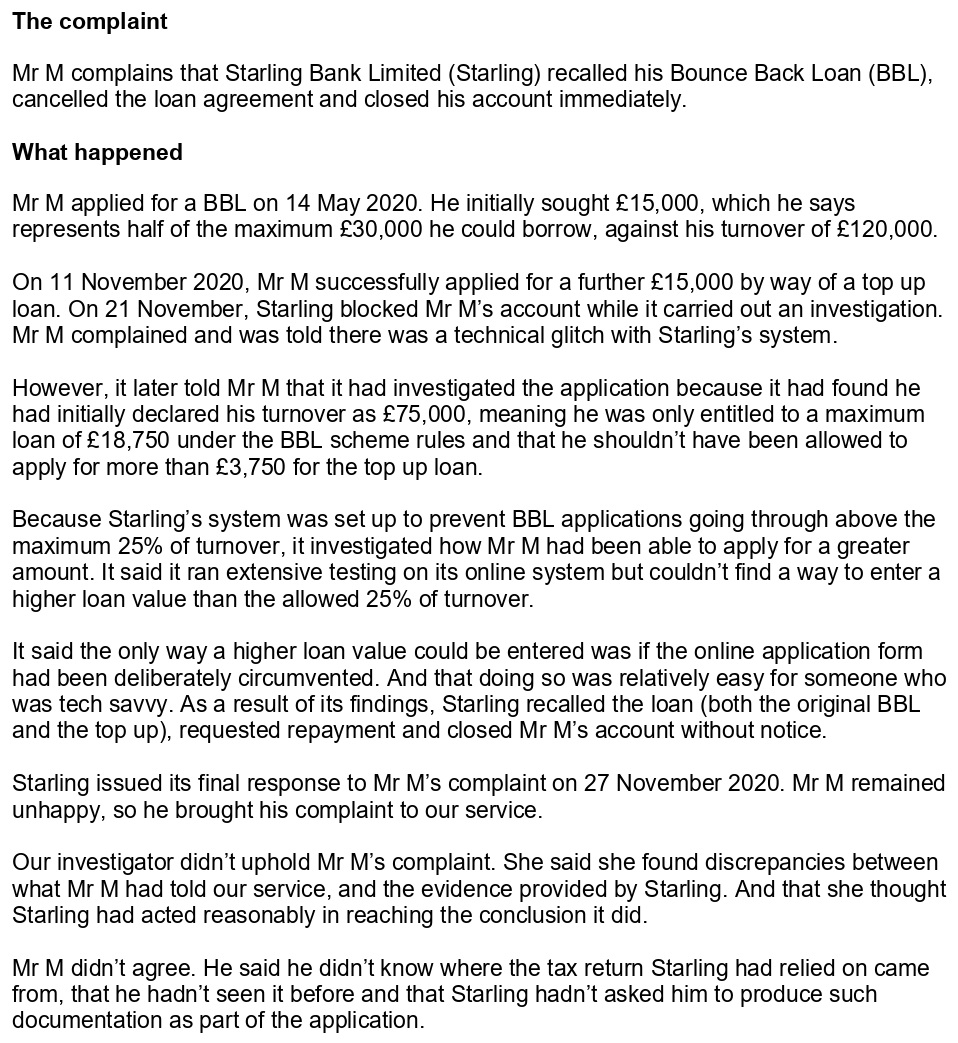 Ok, have you got your head around all of that? Keep in mind this case has been plodding along for almost a year now. This is what the Ombudsman has to say on the above: 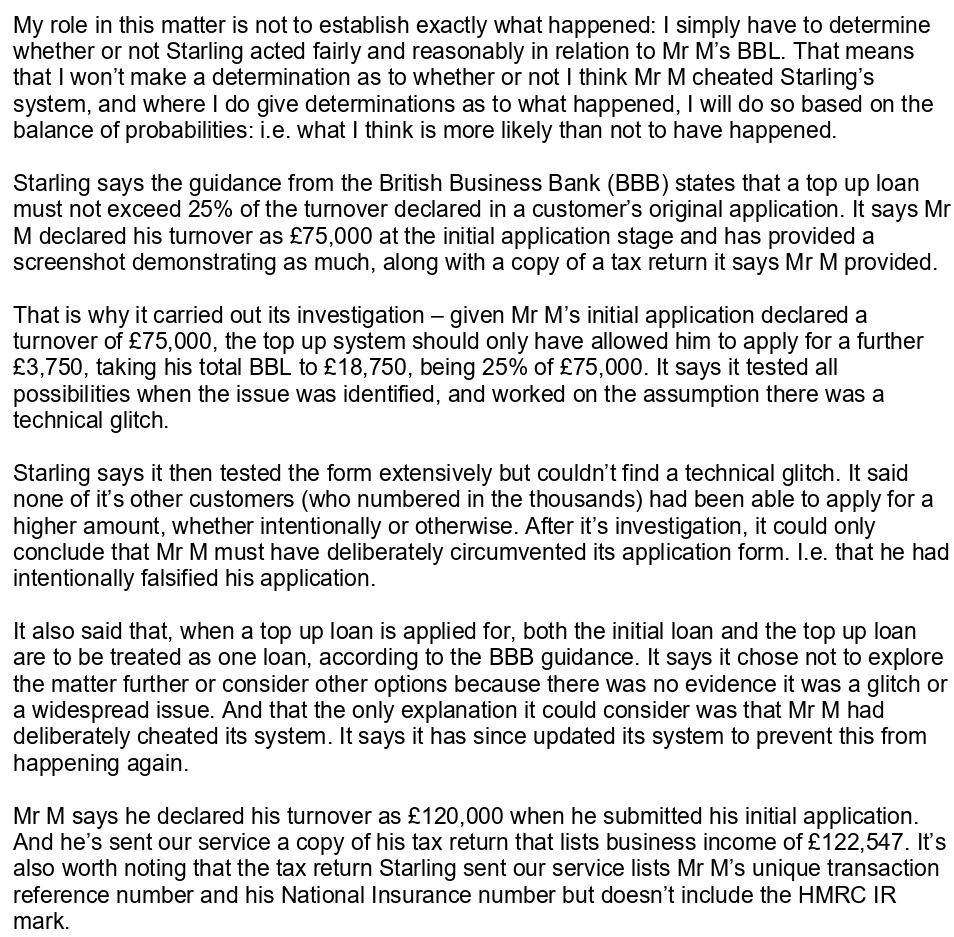 The above somewhat worries me as an observer, for Mr M has obviously sent in proof to the Ombudsman his turnover was what he said it was, but the bank says it was lower based on a “screenshot”. Yes you read that correct, not a real document, a bloody screenshot and one the Ombudsman admits is missing a critical HMRC IR mark. Amazing.

Now, did Mr M send in a screenshot or not, who knows, however let’s look at both possibilities if he did not then Starling made it up or if he did but forgot he did so, Starling who have always been vocal on “preventing BBL fraud” should have picked up that missing HMRC IR mark in a shot.

If he did send it in then perhaps he was sending it in as proof that he was simply in business in 2018. if it was a 2018/19 return, as Starling Bank did demand the following of their BBL customers at the time of the BBL scheme and did, as clear as night follows day, state that “we will only use this information to perform checks, not to assess affordability or criteria”.

Besides. let us not forget that the turnover figure was for the calendar year 2019 not the financial/tax year……

Let me get back to the complaint and the outcome: 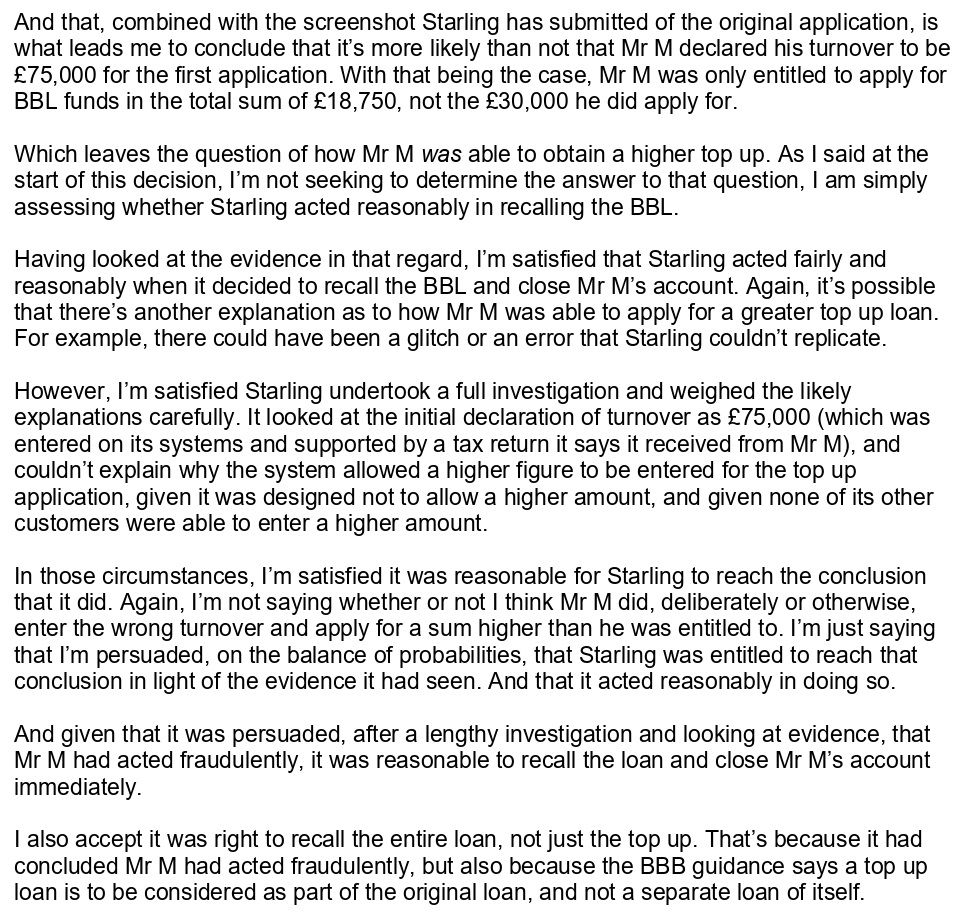 I have to jump in here again, this Ombudsman is surely befuddled and hard of thinking, he was presented with the actual tax return showing the £120k+ turnover which is what the whole complaint surrounds, but sides with the bank based on a dodgy screenshot missing a vital HRMC IC mark? WTF. You really couldn’t make it up.

Dear reader, at this point ask yourself if something does not make sense why is that the case…. Talking of making something up, do you actually believe this story that there was no technical glitch, and that some random customer managed to bag a few quid extra for a top up and some how managed to circumvent a supposed highly secure banking platform, oh do f*ck off how farfetched is that.

Not only that, the supposed “master hacker” left all his money in the account after supposedly hacking the banking platform, hahaha simply amazing, first time in history someone allegedly robs and bank but leaves the money in the banks safe.

The Ombudsman sounds a right one if he believes all this nonsense. Funny how no one else managed to “circumvent” their banking platform wasn’t it, I expect the National Audit Office and BEIS will be all over the bank about that and will be dragging in the British Business Bank higher ups who were supposed to be on top of those BBL lenders, imagine tax-payer backed loan top ups being fired out by an insecure banking interface. Amazing, that Ombudsman must be on Cloud Cuckooland, if you have a bridge in London to sell him I am sure he will be all ears.

Anyway let’s get back to Inspector Clouseau of New Financial Ombudsman Service Yard….

I have to jump in here again, and refer to my BBL Kraken Files, for a case once again surrounding Starling Bank who had a big bust up with Barclays about a BBL they (Starling) logged on the “database” incorrectly stating it had been paid out when it wasn’t. That case is somewhere on the website if you want to look it up, but here is the letter Starling wrote to Barclays at the time which somewhat contradicts what the Ombudsman is saying about removing names from that wretched error riddled database: 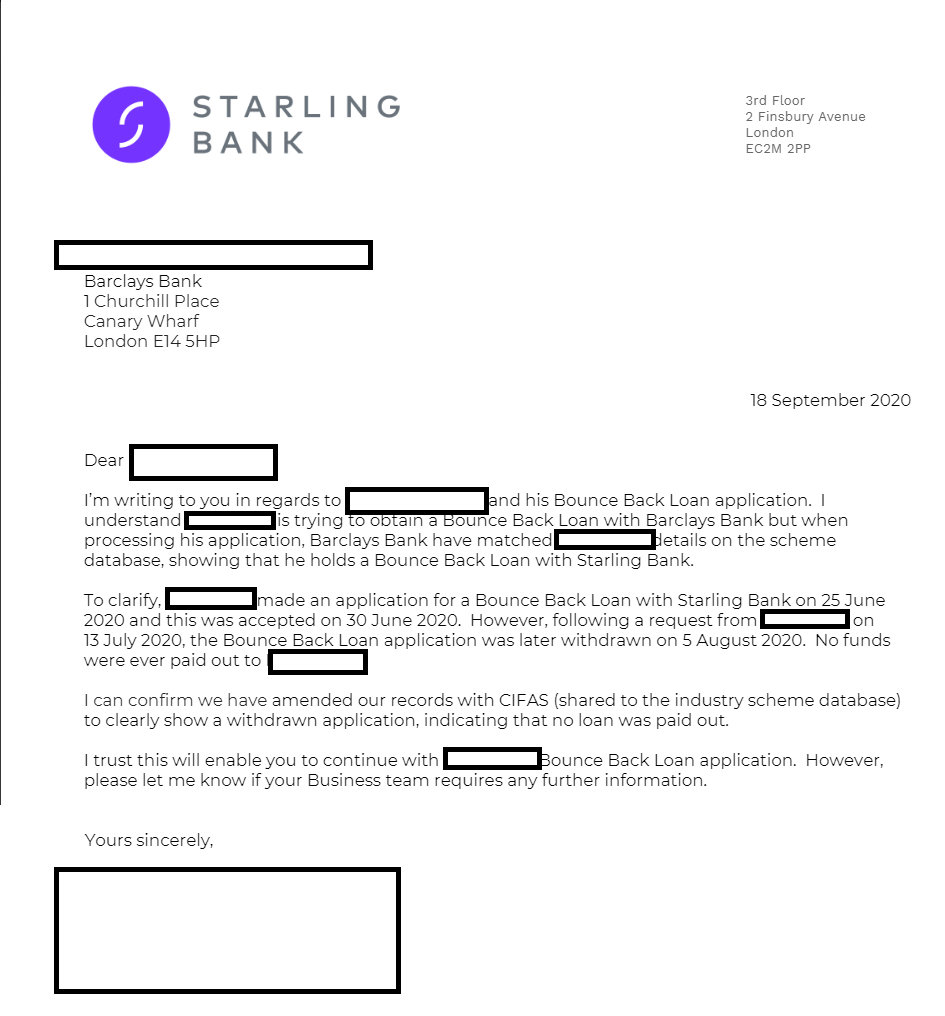 So there you have it dear reader, you make up your own mind if the Financial Ombudsman Service got the above case right or whether the facts surrounding it are so farfetched they got it wrong.