Much has been said recently about the Database that was finally put into place many weeks after the Bounce Back Loan scheme launched, that all BBL lenders had to check for duplicate BBLs. Government Ministers keep on referring to it when claiming it helped stop over £2.2billion in fraudulent BBL applications.

What most of them fail to mention, is that numerous people who were listed as having a BBL on that database had not even had their application looked at and were simply on a “waiting list” with lenders such as Tide.

Lest we forget, Tide soon ran out of money and did not have a penny piece to lend out via BBLs once they had lent out their initially allocated funds, and whilst Tide scrambled around begging the British Business Bank to help them access funds to lend out, they instantiated a waiting list for applicants.

Those who were on their “waiting list” were listed on that Database and as such they could not apply anywhere else for a BBL, for the new lenders they approached would check the database and reject their application on the grounds of them having a live application in with Tide.

Instead of rejecting an applicant, some lenders, such as Clydesdale Bank for example, realised that Tide and the British Business Bank and Cifas who built that database were useless and that Database was riddled with errors, and would ask the applicant to then approach Tide to get a letter/proof confirming they had not got a BBL from Tide and/or their application with Tide was not being processed and that new lender often then approved the BBL.

That of course caused huge delays in some people getting a BBL or even just allowing them to apply, but even worse many people missed out on getting a BBL due to that cock-up.

I also heard from people who were approved for a BBL but then at the last minute had them declined, on the grounds of an entry the lender saw when performing the duplicate BBL check.

I do feel those who missed out or faced long delays in accessing the scheme should be awarded compensation, instead of Government Minister using the dodgy Database figures as proof they were combatting fraud when the figures were skewed.

It was not only Tide who entered people’s details onto that Database erroneously, many other lenders did.

Here are some Tweets about the above from Tide and the British Business Bank who were more than aware of the problems but simply dragged their heels in fixing the problem they had caused with their CIFAS built Database:

This Tweet shows the British Business Bank telling BBL applicants to contact lenders if they thought they were listed on the Database incorrectly. Keep in mind the date on this Tweet, which I forced them to make, also note that they say they do not have a “central register” (Database).

Be aware too that at the time nearly all BBL lenders were unable to cope with the number of people contacting them, and many people who did finally got through to a lenders support team to ask to be removed from the Database or asked for a letter of proof they didn’t have a BBL with that lender would often be met with confusion by the employee who they were speaking too, many of whom didn’t have a clue what the caller was asking them for. 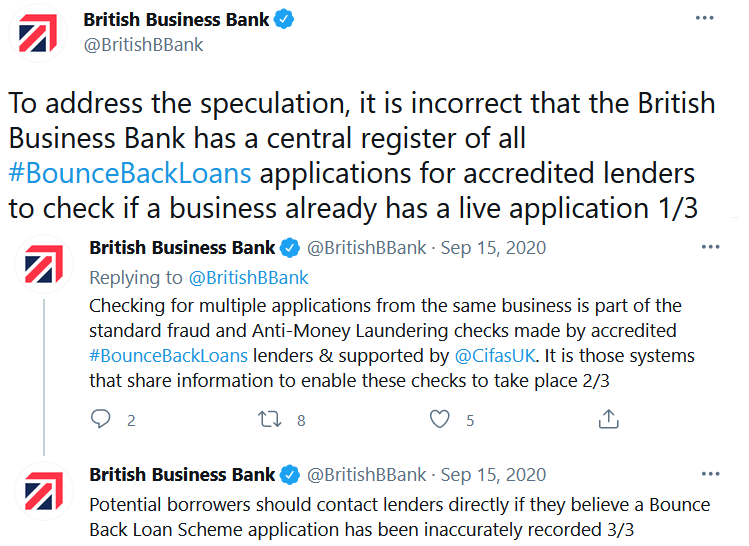 CIFAS jumped onto Twitter to announce that they had built a “system” for the British Business Bank, look at the date, it was many, many months after the Database was launched, the second part of their Tweet is still telling people to contact a Lender, as people were still experiencing problems with being erroneously entered on their dodgy Database: 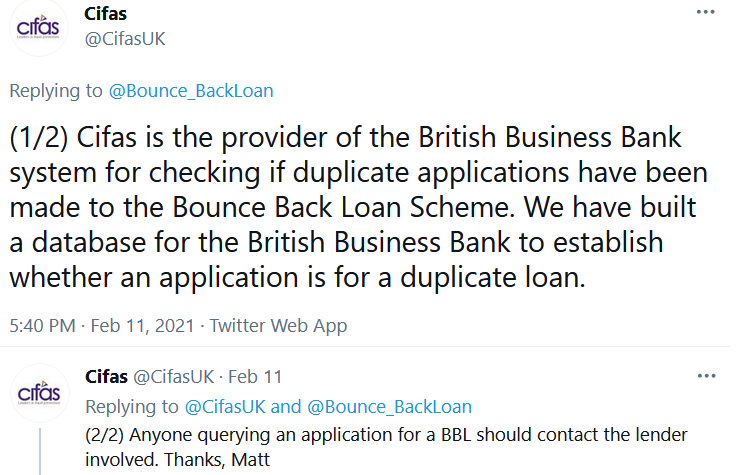 Here is a Tweet from Tide admitting their cock-up, but many people were still named on the Dodgy Database long after the 13th of July and faced delays getting a BBL, and some were accused by other lenders of applying fraudulently for a BBL as they had a BBL application in with Tide when they did not, and whilst some did manage to get a BBL from another lender many never did:

One final Tweet, this is the hapless British Business Bank standing by Tide even though that lender had shafted a lot of people and led them to believe they would get a BBL from them. Tide never did get any more money to lend out. 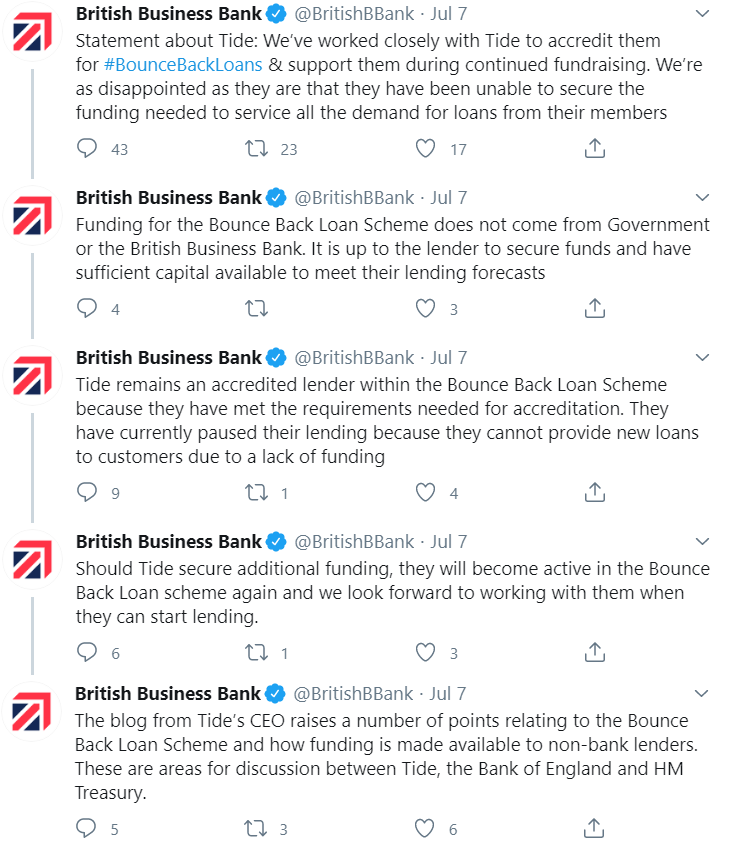 The next time you see or hear Rishi or others saying how they saved £2.2billion in fraudulent BBLs going out the door, remember the above. 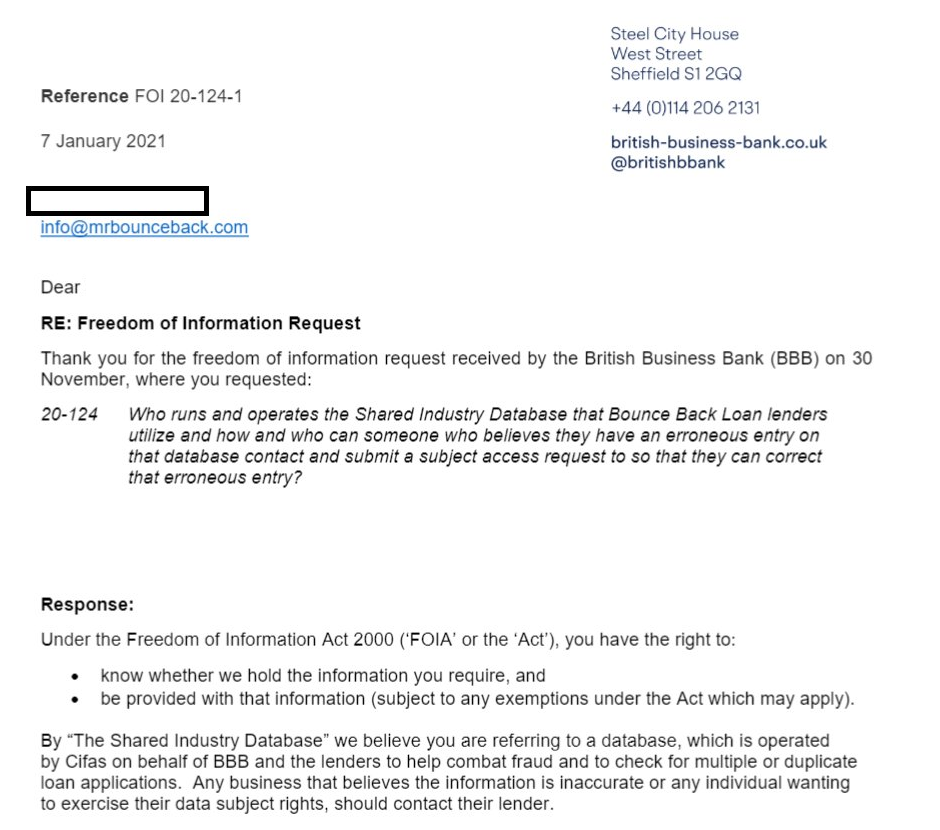