Many of you may have missed the information below which came to light at the end of last year, which gives an insight into the “tiers” each type of suspected or proven Bounce Back Loan fraud is classified as.

Owing to the scale of possible fraud, and limited resources, the Department (Business, Energy & Industrial Strategy – BEIS) is prioritising the pursuit of organised crime. The Department prioritised its fraud response by grouping loans into three tiers and concentrating on the highest risk areas.

The Department could not tell us how many cases were in each tier. It decided not to focus its investigative resource on borrowers who overstated turnover by less than 25%, provided there were no other fraud risk indicators.

It expects lenders to pursue upfront recovery where feasible and cost-effective to do so, and to always seek recovery action where loans are not repaid. This prioritisation approach risks diminishing the deterrent effect of counter-fraud activity (paragraphs 2.13 to 2.15 and Figure 8).

2.13 Good practice requires the cost-effectiveness of counter-fraud measures to be assessed. The Department prioritised its activity within three groups: top-tier, mid-tier, and bottom-tier fraud cases.

The Department could not tell us how many cases were in each group and is not tracking caseloads based on these groups.

The Department prioritised its fraud response based on the return on investment from recovering fraudulent loans, focusing on organised crime.

2.14 It has taken some time for the Department and the Bank (British Business Bank) to build their counter-fraud capacity. At the start of the Scheme, the Department recognised that its counter-fraud function – two full-time staff – would require significant organisational change to cope with the high levels of estimated Scheme fraud.

The Government Counter Fraud Function placed a senior civil servant into the Department to aid the counter fraud response.

By January 2022, the Department plans to increase its counter-fraud team to 10 full-time equivalent (FTE) staff.

The Bank reallocated resources internally, and also used secondees and external parties until March 2021 when it set up a dedicated financial crime team, aiming to recruit six FTE staff by the end of 2021.

In October 2020, the Department proposed options to enhance its counter-fraud measures, costing an additional £32 million, or 0.07% of the total value of the loans.

This cost estimate is not limited to staffing and is regardless of the scale of fraud. As with other government departments, the Department has low numbers of staff with fraud expertise; the Committee of Public Accounts noted in June 2021, for example, that 77% of government counter fraud professionals work in the Department for Work & Pensions or HMRC.

2.15 Organisations should make resourcing decisions with an understanding of the cost and impact on fraud and error.

Owing to the scale of possible fraud, and limited internal resources, the Department is prioritising pursuing organised crime, and it has started to investigate mid-tier fraud cases.

The Department decided not to focus its investigative resource on borrowers who overstated turnover by less than 25%, provided there were no other fraud risk indicators.

This is despite the Bank identifying turnover misstatement as the top risk in its July 2021 fraud risk assessment.

The Department expects lenders to pursue upfront recovery where it is feasible and cost-effective to do so, and to always seek recovery action where loans are not repaid.

HM Treasury told us that it asked lenders to prioritise investigating those applications which appear deliberately intended to mislead the Scheme over those who overstated turnover by less than 25% because it could be a genuine error by the borrower, and it does not necessarily mean the loan will not be paid back. 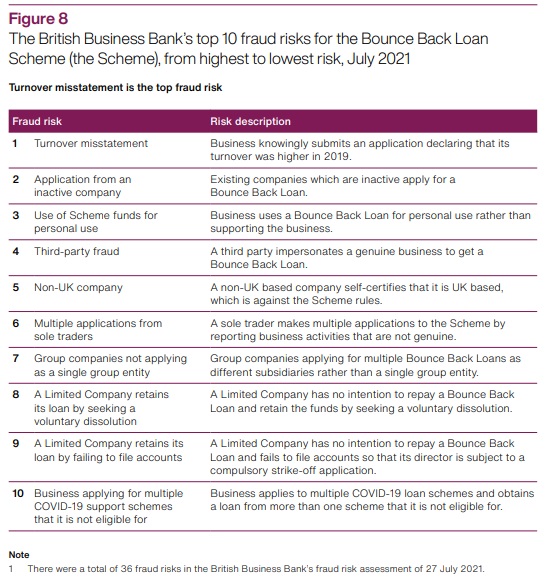 The Department uses enforcement agencies to investigate, prosecute and recover funds for large-scale fraud cases, but the agencies’ capacity is stretched.

The Department uses enforcement agencies, such as the National Investigation Service (NATIS), to investigate, prosecute, and recover funds for top-tier and the ‘higher end’ of mid-tier loans.

Given the potential fraud levels across all COVID-19 schemes, however, enforcement agencies are stretched. NATIS, for example, received more than 2,100 intelligence reports by October 2021 but only had capacity to pursue a maximum of 50 cases per year.

The Department set NATIS a target of recovering at least £6 million of fraudulent loans from organised crime over three years, equal to the amount the Department has invested into NATIS. NATIS’ work up to October 2021 has resulted in 43 arrests across 33 investigations and more than £3 million of recoveries.

The Department relies on lenders to investigate ‘mid-tier’ and ‘bottom-tier’ fraud, but lenders’ commercial incentives to do so are limited. If a lender follows the Scheme rules, including regulatory obligations, and makes a loan which is subsequently identified as fraudulent, it can reclaim the funds through the government guarantee.

This offers limited commercial incentive for the lender to go beyond the Scheme rules in seeking a full recovery of overdue loans, fraudulent or otherwise. HM Treasury has asked lenders to prioritise investigating those applications which appear deliberately intended to mislead the Scheme over those who overstated turnover by less than 25%.

As of April 2021, lenders claim to have prevented £1.97 billion of fraudulent applications and detected £5.3 million of fraudulent loans. We can provide no assurance over these figures. In July 2021, the Financial Conduct Authority, the main regulator for lending, reminded Scheme lenders of their wider obligations to report fraudulent activity, and highlighted the importance of keeping resourcing levels under review.