I recall the boss of one bank that offered Bounce Back Loans giving a speech about how her bank was going to be tough on fraud regarding BBLs as she did not want the NHS to miss out on that money. Well, low and bloody behold BBL lenders are set to pocket and could deprive  the NHS of up to £92.8m through fraud and their errors.

What am I rambling on about today, well watch the video below to hear that bank boss, Anne Boden from Starling Bank going on about every £1 in fraud is £1 less to the NHS:

Fast forward it to the 1min 30 second mark:

Now, yesterday the Department for Business, Energy and Industrial Strategy (BEIS) Annual Report and Accounts had lots of references to Bounce Back Loans in it, however one thing that did catch my eye was this: 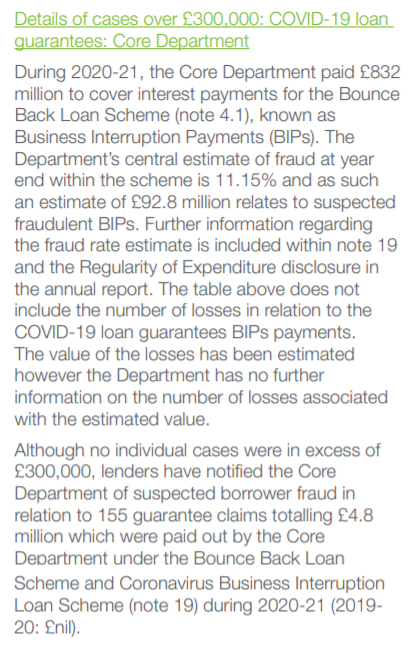 I have asked the Members of the Commons Treasury Committee to call in the BBL lender bosses and challenge them to return any and all BiP payments that were paid to them due to fraud or errors.

I have also asked Paul Scully and Rishi Sunak, but I doubt those two have any common decency to respond, let alone act on my suggestion.

The banks do have the principal loan amount guaranteed by the Government, and if they fail to do the decent thing and return the BiP payments, then it could be said, no, in fact I will say it, they are profiting through fraud and profiting through errors (usually the banks own errors by the way).

Just think what the NHS could do with that £92.8m right now, or in fact any other Government funded Department bereft of funds, why should the banks bag it? Unless people start pointing this out to those in power, the banks will just take all of that cash with a smile on their face.

I do worry some people have just resigned themselves to the fact that they are being screwed over though.

I did raise the point about Bip payments way back in September 2020 when at the time many newspapers were accusing those with BBLs of running out and buying Ferrari’s, so I turned that story around and asked the same of bank bosses, you can read the article via the link below:

Are Bank Bosses “Scamming” the BBL System and Buying Ferrari’s?