A fresh wave of optimism swept through my ever-growing army of Twitter Followers/Lurkers early yesterday, when it appeared, for the first time in months, that the British Business Bank had finally accredited a lender, that on first appearance does appear to be allowing anyone wishing to apply for a Bounce Back Loan to do so.

That news followed on from what Starling Bank did on Tuesday, that being approving many of my long suffering and popular Twitter Followers and paying them within hours of approving them for a Bounce Back Loan.

I am of course more than aware there are still way too many people still on the Starling Bank waiting list, and many more are also still waiting for other banks to finally get around to opening up a business account for them and/or processing a BBL application put in.

There are also way too many people still sat there experiencing the sheer agony of not being able to apply for a Bounce Back Loan, due to not being able to open a bank account with any bank, due to credit ratings or the ridiculous fact that most British Business Bank BBL accredited banks and lenders are not accepting new customers.

I am hoping at some point in time today to get through and speak to someone at that newly accredited lender, that being Conister, as obviously I want to ask them a range of questions that everyone will be seeking the answers to.

If you meet the standard criteria, they will then email you out a Bounce Back Loan application form, you fill it in and then send it back. At the time of compiling this Bounce Back Loan News Update, no one has managed to get to the next stage of the application, so no one yet knows what happens once you have submitted your application.

Once I manage to speak to someone at Conister, hopefully at some point this morning, and get my list of questions answered, I will of course update this news update with those answers.

But do keep an eye on my Twitter feed, for a quick poll I ran yesterday resulted in over 100 people saying they have applied with Conister for a Bounce Back Loan. 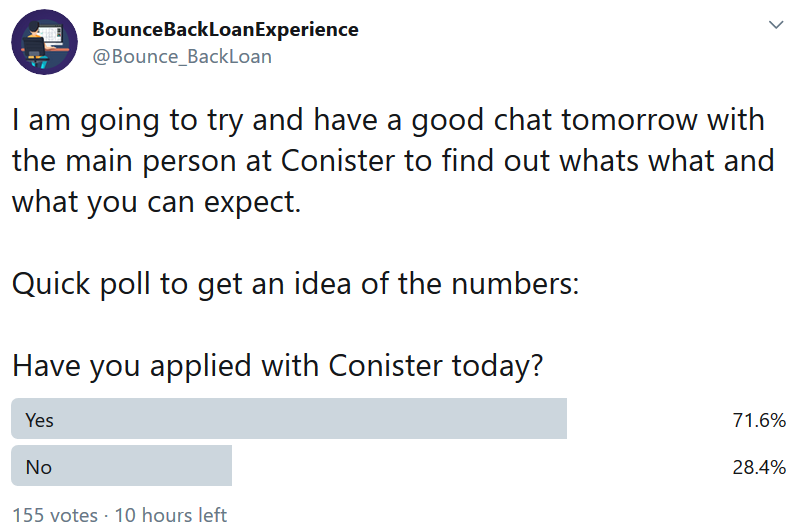 As such once any of them do get to the next stage of the Conister BBL application process I’m confident they will be updating everyone on their experience.

I have been banging on about the Tide waiting list for quite some time. In a nutshell if you are on that waiting list, and keep in mind they have no money to lend out, then you are likely to find that when you apply with another lender for a BBL you may initially get approved, but during the final checks, those being interbank checks some lenders will then decline you for being on that waiting list.

Please read below for some reasons as to why you may be declined a bank account and/or a Bounce Back Loan with some lenders.

Many people who are declined tend to fear it is their credit rating/score that is the cause of a decline, and whilst that can and may play a part obviously, there can be a whole host of other reasons, some of which can be sorted out, and when the latter is the case you may find it much easier to open a bank account and/or obtain a Bounce Back Loan.

Some Lenders can and will and are in within their rights to decline anyone for an account and/or BBL based on their own criteria in additional to that laid down by the British Business Bank.

With that in mind, if you have checked all of the following and/or have been declined by one lender then you are also within your rights, and encouraged to apply to any other lender that is part of the Bounce Back Loan scheme.

SIC Code – Not matching on companies house vs what you put in your application.

SIC Code – considered a reputational risk – you would be surprised how many business types fall into this category.

Voters roll e.g. Chris vs Christopher, as your middle name.

Business address not matching, has your accountant used their address to register? What is your correspondence address at companies house?

Markers registered against the company or director

Many Bounce Back Loan applicants that have been through hell and still are experiencing problems have been offered compensation from a bank ranging from £50 up to £2500 for the more complicated problems.

It is your choice as to whether you accept any offer of compensation and the amount you accept too.