I have decided to see if the Competition and Markets Authority can in any way help with the problems that I do know many of you out there are still facing regarding Bounce Back Loans.

Whilst attention in the last couple of weeks has been mainly on top-ups, thanks in no small part to most banks dragging their feet in getting a system in place to process and pay out those top-ups, I am still more than aware there are plenty of you that haven’t had any chance what so ever of applying for a BBL.

When I see Bank CEO’s such as Yorkshire Bank and Clydesdale Bank Chief Executive David Duffy saying his bank had decided to only hand out Bounce Back loans to existing customers in order to reduce fraud, that really does rile me ,and probably does get right up the crack of the arse of anyone who has no banks left to approach for a bank account that will pave the way to a Bounce Back Loan.

What makes his statement even more annoying is that the Government has always made it known that they expect all banks to open up their now slammed shut, and in most cases always slammed shut new account opening systems to anyone still excluded from the scheme.

Anyway, to cut a long story short I got in touch with the Competition and Markets Authority, and asked them the following:

The one bank that is still open to new customers by the way, as I was inundated with messages from people seeing that tweet, is Starling Bank, but be aware they do have their BBL waiting list and everything that entails.

The Competition and Markets Authority did get back to me by the way: 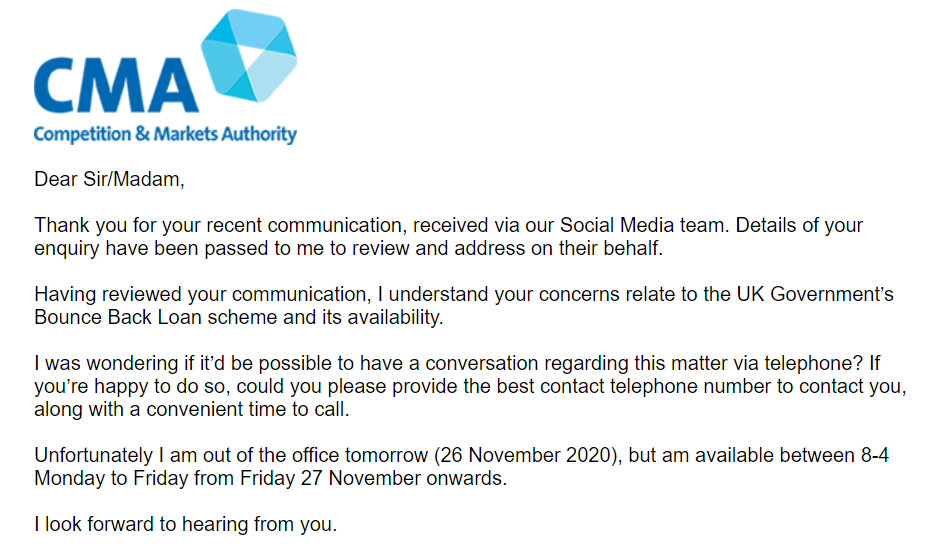 As such I will be giving them a bell on Friday, explaining everything to them in the hope they can do something, whether they can or not remains to be seen, but anything is worth a try I suppose.

One final thing to note which will be music to the ears of many of you to there is that HSBC have now got around to resuscitating their long dead Feeder Accounts to those who did get a Bounce Back Loan from them using those supposed “one use only” accounts.

As such they have been slowly and in something of a random fashion, sending out EchoSign’s to those that have applied for a top up for a Bounce Back Loan they applied for and got with them via a Feeder Account.

Just hang in there if you are waiting, and I do know there are plenty of you, for your EchoSign will come when they get around to processing your top-up request.