My inbox lit up the other day when I reported that I had received a complaint about a firm called Zinc Credit Management, who had been hounding and continue to hound someone with a BBL related problem with Metro Bank.

It now appears there are several people also being hounded by that firm, which for reference are members of the Credit Services Association, a somewhat strange debt collectors’ type of trade association which has Labour Member of the House of Lords, Tom Chandos as its Chairman and ex Labour shadow chancellor Chris Leslie as its CEO.

The most common link I can see from the complaints that I have been fed information about, is that there will often be some form of error by Metro Bank in collecting a repayment for a BBL, whether that is they do not collect a direct debit, force a customer to add the funds manually or they renege on a repayment plan.

The way the Bounce Back Loan scheme is going, it would not surprise me if Metro Bank were failing to collect those repayments on purpose so they can try and recover the full amount, that is of course my opinion only at this minute, but I have seen many banks do much worse.

Anyway I digress, what happens when a repayment is missed, fails to get processed or whatever is that Metro Bank then hand it over to Zinc Credit Management, and they in turn start to hound those customers with phone calls and/or letters. Obviously Metro Bank do not want to do the grubby work of hounding their customers or do not have enough staff to do so.

Any attempt by a customer of Metro Bank to contact the bank to get this problem sorted is met with a simple instruction to contact Zinc.

Just be aware of this fact and if you see a BBL repayment to Metro Bank not going through then expect Zinc to start hounding you.

I have alerted several people including not only Metro Bank but Paul Scully from BEIS, the National Audit Office, Simon Clarke from HM Treasury, and the Common Treasury Committee members about this problem, about how bank errors are leading to harassment by that debt collecting firm, but as usual those in power are choosing to ignore the problem.

It will come back to bite them on the arse as usual, make no mistake about that.

If you are being hounded by Zinc then keep all letters they send you, documents from the bank proving repayments were made, attempted to be paid or failed to get processed etc and log all phone calls too, as it will come in handy further along the line.

A few of the messages I have been sent about this problem: 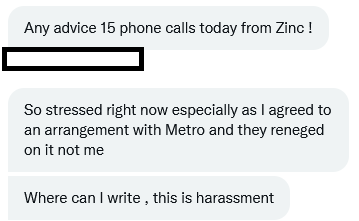 As always, I will keep you updated on this saga, if and when the numpties at the bank or those in power address it or the sage gets any worse.