It was obvious to anyone with a nose on their face (apologies if you have not by the way), that HSBC have some major problems with their Bounce Back Loan top up system and have had such problems since the day they launched it.

I have been and continue to be, contacted by many people who originally took out a Bounce Back Loan with HSBC, via either their business accounts or a feeder account who have gone on to apply for a top up, as far back in many cases to November the 10th and have not heard anything back from that bank.

Those that have contacted me have received a confirmation email saying their top up application has been submitted, often within minutes of them applying for a top up but have heard nothing since.

Any attempt to contact HSBC and chase up their application has been met with replies (for those lucky enough to make contact with their support team members that is), of simply “wait”.

I did contact the British Business Bank, who as we all now know are as toothless as a “rule maker” as a new-born baby, and they told me they had launched an investigation and have found HSBC were approving top ups:

That may be the case but, from documents I have now seen whatever “investigation” has been performed by the BBB was lacklustre, as HSBC have admitted they, cannot locate may applicants’ applications through the application numbers supplied in the email confirmations they sent out.

What does this mean if you are one of the many people who have now been waiting 9 weeks tomorrow for your top up to be processed, well continue to badger their support teams if you must, but as proven without a shadow of a doubt many of them are completely clueless and have told many people they are unable to contact the BBL/Top-Up team.

I would now encourage everyone who is waiting for a top up to contact your MP as a matter of urgency, as I have now had reports once you do so and your MP contacts HSBC on your behalf magic begins to happen.

As for the British Business Bank and HSBC, hang your heads in shame, making people wait almost 9 weeks now and not helping them or in most cases completely ignoring their cries for help and their desperate pleas for an update is an out and out scandal.

Oh and I have been passing on email addresses from those who have been able to contact certain people at HSBC and get an email contact to others asking me for help, but someone gets all upset about that and goes running to Twitter to attempt to suppress me from doing so. Below is an old tweet from May someone complained about: 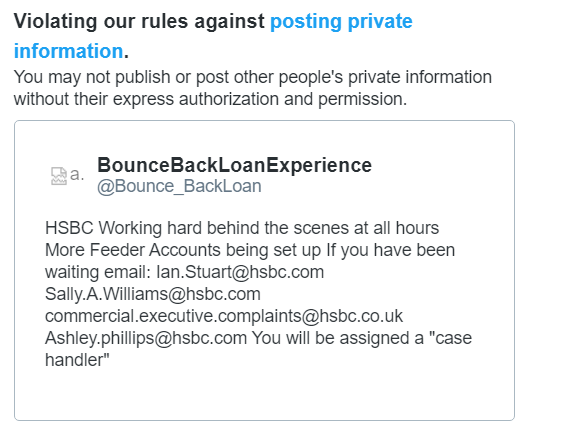 As you can see dear website visitor this is what you are up against with bankers these days.

Look away now if you are easily offended.

Well, HSBC pull your fucking finger out stop treating people like shit and do what you said you would do when you applied to be a Bounce Back Loan lender, and fucking LEND. Nine weeks for a top up is killing businesses across the UK, get that fact into your heads.

Forcing people to go running to their MP to get you to do your job is a fucking scandal, but hey ho you don’t care do you. As for the British Business Bank, well I have visions of them all running around their plush offices, fingers in their ears all singing “we are not listening, we are not listening”.