The Bounce Back Loan scheme is mired in dodgy goings on, and today I want to bring to your attention how two people with links to the Labour Party are now at the forefront of hounding people with Metro Bank BBLs.

I was contacted by someone who had been messed about with Metro Bank regarding putting their PAYG options on their Bounce Back Loan in place, and that bank told them that they could do so only when they had made one full repayment.

Obviously, that came as a shock to that customer, and would mean they would have to scrape together the money to do so, and they explained that to the bank who proposed a small monthly repayment to cover that first full repayment and then they would agree to the PAYG options.

All fine and dandy and things were then put in place and a direct debit set up to make those agreed small monthly payments to clear the first full monthly repayment, the customer wasn’t happy at that, but that is what the bank demanded.

The repayments have been made I have seen proof of that (have obviously edited bits out but I have seen the originals): 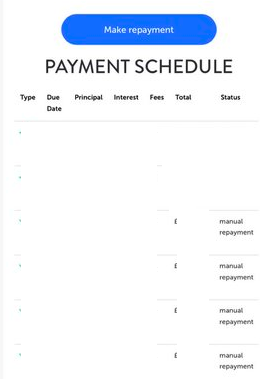 However, out of the blue a firm called Zinc Credit Management sent a letter to the Metro Bank customer demanding a repayment,  (highlighting the entire BBL amount owing) possibly as a scare tactic to get the customer to call them. 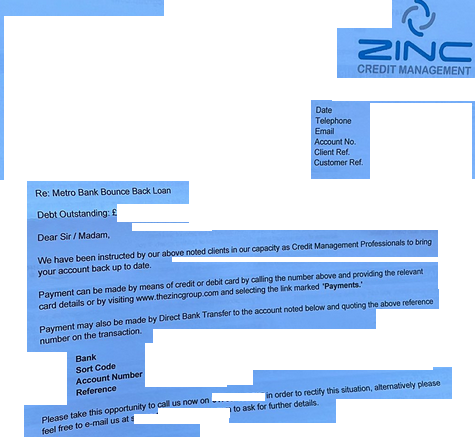 The customer then called the bank who simply said the debt collectors are the people you need to speak to not us!

The customer is of course fuming and just so you know Zinc are a member of the Credit Services Association according to their website.

I also alerted some more useful idiots, those being Paul Scully the Small Business Minister and “hot lips” (don’t ask) Simon Clarke MP Chief Secretary to the Treasury neither could be arsed responding.

I have told the Metro Bank customer what they should do to get the debt collection firm off their back, that customer tells me Zinc have been hounding them by phone too at all hours.

But just step back and think about it, you have a now imploding loan scheme that being the BBL scheme, launched by the Conservatives, and people with links to the Labour Party are now linked to firms doing the grubby work of chasing up arrears or in this case arrears that are seemingly imaginary.

Got to hand it to Rishi, that is pure genius.

I will keep you updated at this case progresses.

Oh and for the record Tom told me companies he is linked to bagged two BBLs and a “charity” he has links to bagged a CBILS: 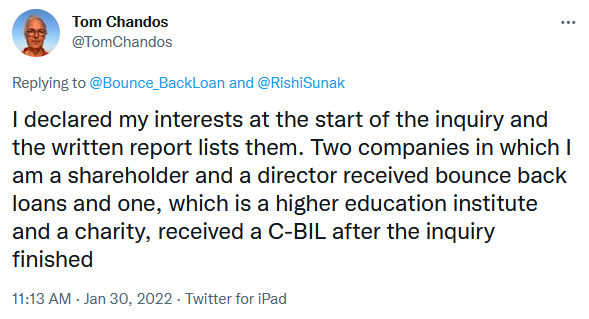 Sadly he went very quiet on me when I asked him my next question:

The above was a vote on giving extra protections to those with a Bounce Back Loan.