Alas, the reply was they would release the figures in September, well a quick glance at the calendar reveals it is now October and guess what, they still haven’t let us know those figures.

Yesterday the British Business Bank were attending an expo for Brokers and were asked that question by event host Naga Munchetty, she of BBC Breakfast fame, well she couldn’t get them to reveal those figures either.

Possibly those brokers attending that event were just as annoyed as everyone else at the failure of the Recovery Loan scheme, for as you may recall the BBB had been cavorting with them previously letting them know how to obtain some juicy fees and commissions from those confused by the complexity of that scheme and those unsure of how to apply, you will find details of that sickening story via the link below:

There was talk at that event of a new loan scheme being planned, however I would not get too excited about it, for if it is anything like the Recovery Loan scheme very few will qualify for one, if any new scheme is launched.

One chap told me yesterday that he had applied for and been rejected six times for one Recovery Loan from different lenders, the excuses those lenders gave were:

I am aware of one person who has got a Recovery Loan, just one mind you!

If you watch the video below you will hear one of the team at the British Business Bank clear as day saying the figures would be released in September:

Hi @kevinhollinrake or any of the respectable members of the @APPGbanking any word on this? It appears the BBB are out at some type of party/do for finance brokers today? Rang their London and Sheffield office, no answer? @RishiSunak do you know? https://t.co/qcHXdvwvDm

One of my spies at the event did let me know the British Business Bank were giving out nice notebooks though…. 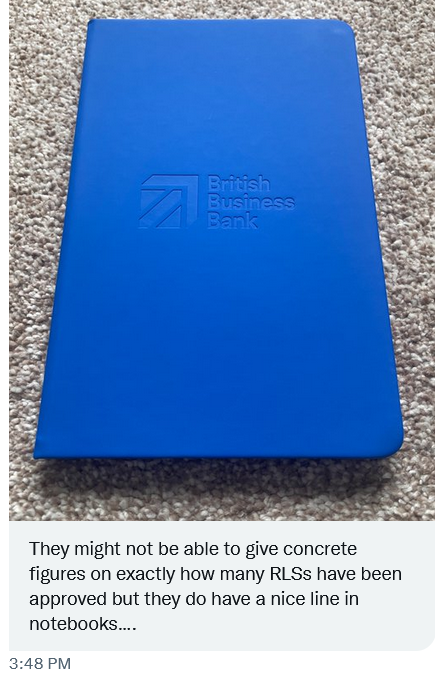