Baroness Buscombe is currently experiencing just how utterly useless the Department for Business, Energy, and Industrial Strategy (BEIS) are, for her question that she asked in the House of Lords to that department back on the 9th of February 2022 which was due to be answered on February the 23rd has still gone unanswered.

That question was “To ask Her Majesty’s Government how much HM Treasury has paid out to Bounce Back Loan Scheme (BBL) lending banks under the state guarantee up to 31 January 2022; and what percentage of this figure was attributed to losses from fraud.”

It is currently labelled as “Answer overdue: was due for answer by 23 February 2022” on the House of Lords website.

However, whist we await that answer, which will no doubt be revealed soon or BEIS will dream up some excuse for the requested information not being available, there are some figures that I can share with you.

That is the current number of Bounce Back Loans that are in arrears as of the 10th of January 2022, they are as follows:

The above figures will of course continue to rise moving forward.

As a comparison, the last set of data related to BBL arrears was published by the National Audit Office but covered the period up to the 30th of September 2021, and the total number of BBLs in arrears at that time was 106,196, so in just a few months that figure has increased by 51,348, or 503 additional BBLs per day going into arrears.

I have reported that many people are being contacted by their banks out of the blue and are being asked all manner of questions about their business activities, often under the guise of “safeguarding” or ongoing “KYC”(Know Your Customer) checks.

The British Business Bank has shared information on around 13,000 possible duplicate facilities with the relevant lenders for investigation and possible action, and as such if a lender does contact you asking questions it may be possible they believe you got more than one BBL for the same business.

However, you have to keep in mind the British Business Bank are, in the words of some lenders, “not fit for purpose” and they (the BBB) has gone on to say it is possible that only a small subset of these will be confirmed as duplicates following investigation, proving if nothing else just how messed up that organisation is, let’s hope they do not cause any banks to come down heavy handed on innocent BBL recipients with allegations that prove to be false.

Having been exposed as having outrageously lied to the Public Accounts Committee and having just apologised for doing so, Susan Munby from BEIS has also had to grass her department up to the National Audit Office due to “an incident”, as you will see in the letter below: 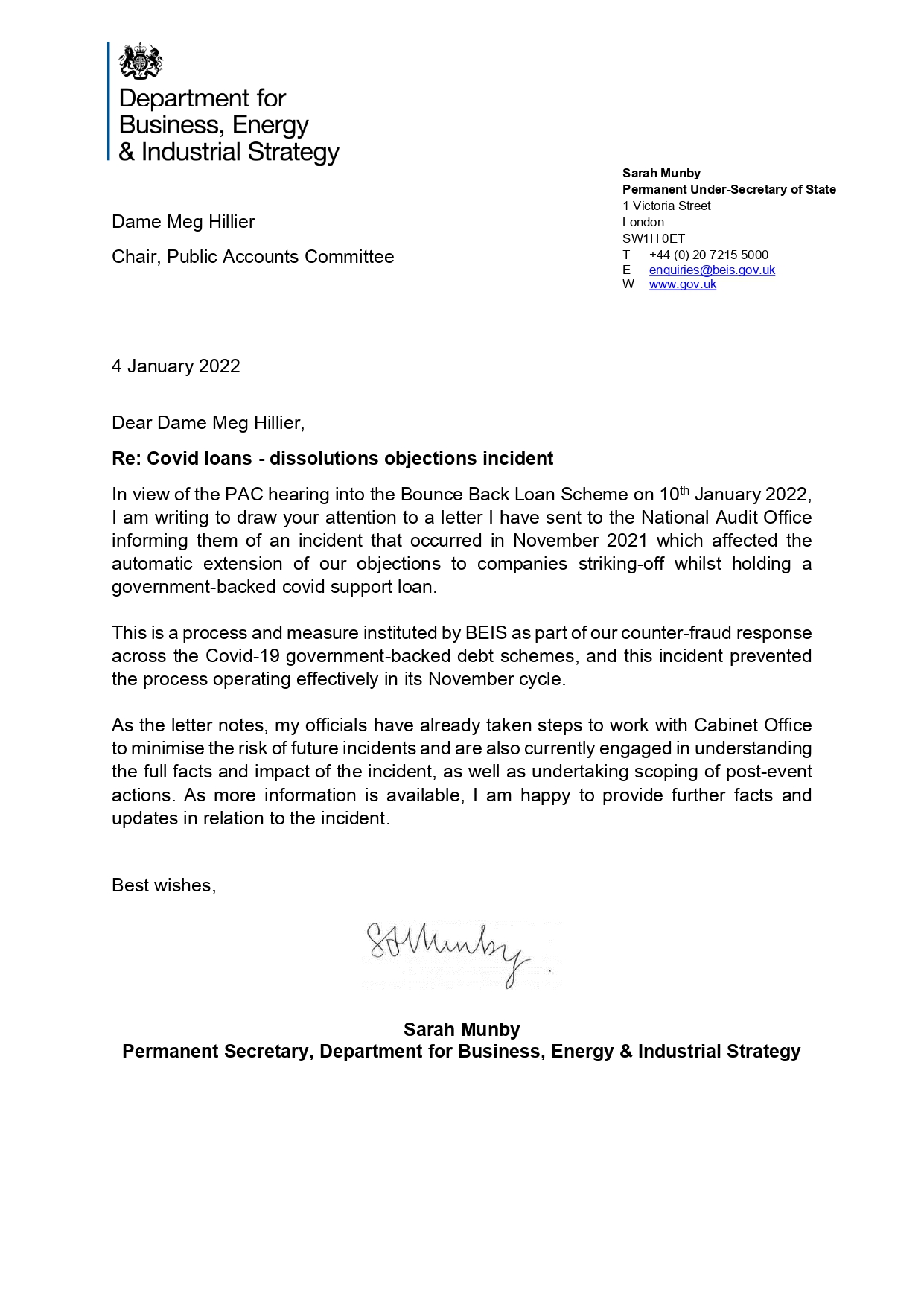