One week after the launch of Bounce Back Loan Top-Ups going live, I ran a quick poll over on my Twitter account, asking followers what they thought would come first:

Whilst a somewhat tongue in cheek poll, the results speak for themselves, for here we now are, two full weeks after the launch of the top-up facility and the majority of people who do qualify for one haven’t had their top-up application processed and are no closer to actually receiving the funds.

In fact, the way in which banks are refusing to communicate with those wanting a top-up and the lack of updates coming from most banks is causing a lot of people anxiety and added stress, for let’s face it in the midst of a lockdown, no income coming in for many small business owners, that little bit of extra cash they can borrow via a top-up does offer an added life-line to save their business.

One thing to be aware of is that banks are checking the “shared industry database” when you apply for a top up. That means they look to see if you have already applied for a BBL with any other lender and may have already received a BBL for the business you are applying for a top up for.

The shared industry database was put into place to stop the risk of a business receiving more than one Bounce Back Loan and to also stop fraud.

However, and that is important, that database as I have been banging on about for months is full of errors, bank staff do not know how to read it properly and could see your details listed upon it and then decline your application for a top up in error.

Reasons why you could be listen upon that database erroneously could be that you went on a waiting list with a bank/lender at some point in time before securing your BBL with another lender, and never actually got a BBL with that other lender, you may have applied for a feeder account with a Bank but never got a BBL from them and a whole host of other reasons.

Those reasons include bank staff incorrectly adding your details onto that database stating you have been paid out a BBL even when you have not (seen 100% proof of that many times) due to them for want of a better word being “thick”.

If you are incorrectly or even correctly listed on that database and you have applied for a top up then that you will see your account by the lender you have been given a BBL by being locked and you could in fact probably will be threatened with all manner of legal action. 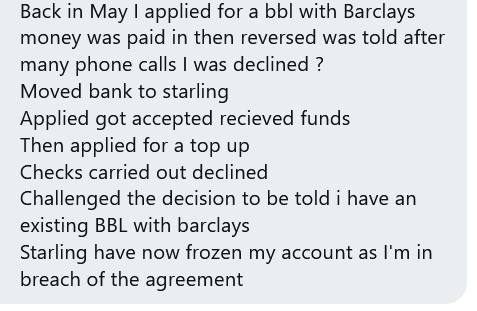 I long ago christened the term “Imaginary Bounce Back Loan” and that is what many people do have listed against them and their company due to the way the shared industry database has been set up, the British Business Bank are more than aware of the problems with that database but it does appear they prefer to look the other way and have done diddly squat publicly to alert small business owners of the problems the database can cause and how to get them correctly.

If you are being accused erroneously of already having a Bounce Back Loan from another lender after applying for a top up and you have not had one and have had to suffer the indignity of having your accounts locked,  then stand your ground and do not let them get away with their  actions.

You will need to get proof from the lender they accuse you of having a BBL from (many banks can send you out a pdf letter) stating they have not given you a BBL then give it to the lender you did get a BBL from who you are applying for the top up with.

You should of course also demand compensation for their false allegations if they are indeed false.

Below is a list of the main banks and lenders I have been asked about the most regarding top-tups and an update regarding their top-up facility:

Metro Bank – Still an agonising wait for those of you waiting and waiting for a top up from Metro Bank, they still have not even got around to making their system live yet. So, keep on waiting is all you can do.

HSBC – You will possibly be pulling your hair out if you are waiting for news of a top-up from HSBC as they are experiencing massive delays with their top-up facility. Much more so if you got a BBL with them through a Feeder Account.

Starling Bank – Starling Bank appear to be in complete meltdown, support staff are taking an absolute age to respond to customers and most people report a copy and paste type of response to their top up related questions.

I have seen proof that they are also making errors regarding top-ups and one poor chap has had his accounts locked for days now due to Starling claiming they paid him too much for his top-up, which is strange as their system was set up to tell top-uppers how much they could apply for.

Barclays – Barclays appear to be as messed up as all other BBL accredited lenders and as such you are going to face a long and drawn out delay with them sadly.

NatWest – Not sure what is going on over at NatWest as they also appear to be experiencing problems and delays processing top-ups.

However, one thing that they are famed for doing, and I have seen more reports of this over the last couple of weeks, is closing business owners accounts down, and they have been doing that to some people who have applied for a top up.

Lloyds – Quite surprised by Lloyds, for I have always been impressed by the way they launched and managed their Bounce Back Loan facility, however I have been inundated with many complaints regarding top-ups not being process and a lack of information coming from their support team.

Conister – As many people who did get a Bounce Back Loan with Conister were my followers, I have been asked many times if they have made live their top-up facility yet. As it stands no they have not and they, as per normal, seem in no rush to want to make it live either.

Clydesdale/Yorkshire – Two banks who have acted responsibly during the Bounce Back Loan scheme, fair play to them are Clydesdale and Yorkshire Bank, they have approved many people for a BBL who had been declined elsewhere as they understood the problems many people were having and also were aware of the problem the shared industry database was causing with erroneous entries upon it and the such like, and did go above and beyond to help such applicants overcome those problems and errors with that wretched database.

However, they too appear to be quite slow at sorting out top-up applications, however I am sure they will just plod along in their own sweet way and will get around to processing top-ups in a timely fashion eventually. Just be aware they are slow yet methodical so I would not be overly worried if you are waiting for news on your top-up with them.