Having obviously been given a talking to, the British Business Bank (BBB) finally got around to releasing the Recovery Loan figures yesterday, and knowing they would make for grim reading the Government opted to leave it to that organisation to announce and publish those figures, rather than them publishing them on the official Gov.uk website like all other loan schemes’ facts and figures had been.

With most people who had applied for a Recovery Loan having been declined one of those loans or having had their application withdrawn by the bank before it even got checked, and with banks being forced by the rules of the scheme to try and offer anyone applying one of their own loans on better terms, if possible, rather than supply them with a Recovery Loan, the BBB decided to not include in the officially data the total number of applications.

By doing so that would of course have revealed the truth about that scheme, that being the exceptionally high decline rate.

The figures released yesterday reveal that some £1.06bn has so far been offered through 6190 facilities to smaller businesses across the UK. However only 5137 facilities have been drawn down, providing £823m of funding.

You may be wondering why a tad over 1000 of those loans have been offered but not drawn down yet, well unlike the Bounce Back Loan scheme, which was designed to supposedly fire out loans rapidly, there is a huge amount of checking, validating of paperwork, facts and figures and delays from when a facility letter goes out until the loan is paid out and finally drawn down

Word has it that Rishi will be announcing an extension to the Recovery Loan scheme during his Autumn Budget tomorrow. Not sure why, perhaps it will allow him to say the Government are still helping SMEs via a Government backed loan scheme, but I doubt he will say very, very few actually get a Recovery Loan though.

My Thoughts on the Above: 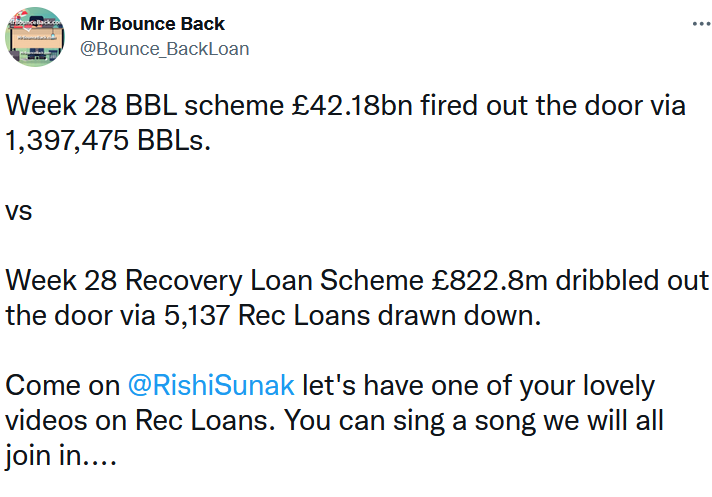