The sh*t has not quite yet hit the fan with the Bounce Back Loan scheme, for with most SMEs opting to take the 6 months repayment holiday offered via the PAYG options, and with 18 months of interest only repayments ahead of them, not many of them have been forced to default just yet.

However, with trading restrictions having lasted way longer than was originally expected, and with the supposed short term “flatten the curve” nonsense having been proven to be such (nonsense), the BBL scheme is a ticking timebomb that will decimate many businesses if Rishi doesn’t address the design of the scheme.

I found this clip of Rishi talking about data, well that data is below Rishi, read, digest, and do something.

I will just put this out there. pic.twitter.com/SCRI55YREO

The British Business Bank who can be quite a secretive organisation, did commission a couple of surveys between 27 August and 25 November 2020 and 27 November and 18 December 2020 in which they asked SMEs a range of questions, including several about Bounce Back Loans.

It was the latter survey that was focused solely on BBL recipients, and it did reveal some interesting if not depressing facts and figures.

Much more so when you compare it to a couple of polls that I ran a month or two before they released the findings of their survey, which for reference was in March of this year.

With that in mind, below you will find the outcome of that survey along with the result of the polls I ran for comparison.

Percentage of BBL’ers That Had Used Up Their BBL Funds

The British Business Bank survey asked 1001 BBL recipients how much of their Bounce Back Loan they had so far used, and as you can see from below, that figure was 22%.

Keep in mind the date of their survey which was a tad over 6 months after the launch of the scheme:

A poll I ran in February 2021 of 561 BBL recipients told a different story:

Concerns About Repaying a Bounce Back Loan

Below you will find the outcome of the British Business Bank survey, regarding those with a Bounce Back Loan being worried about their ability to repay that loan: 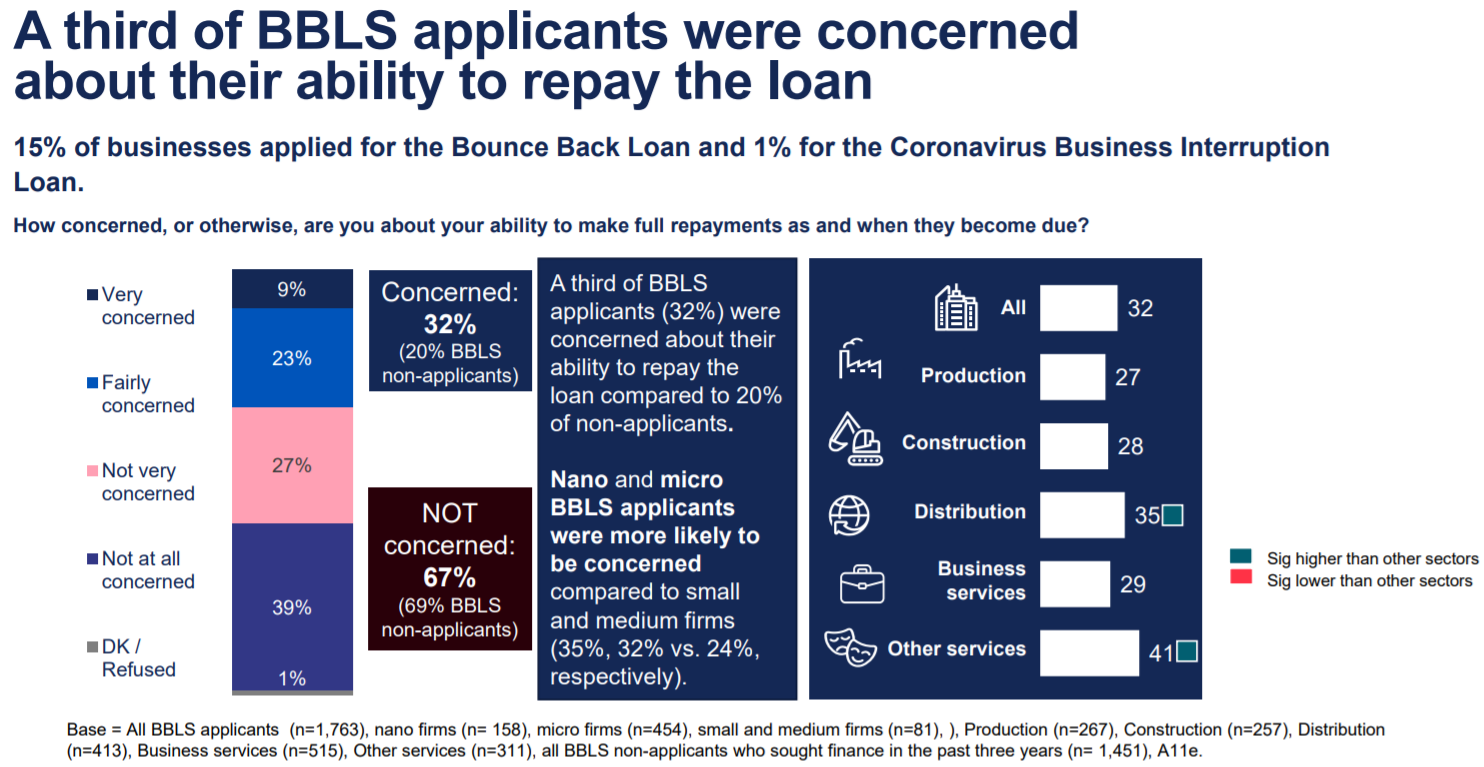 As you can see that survey suggests a third of BBL recipients were already worried about their ability to repay that loan.

I ran a similar poll in January of this year, the results of which can be found below, be aware the number of people who took part in that poll was 464: 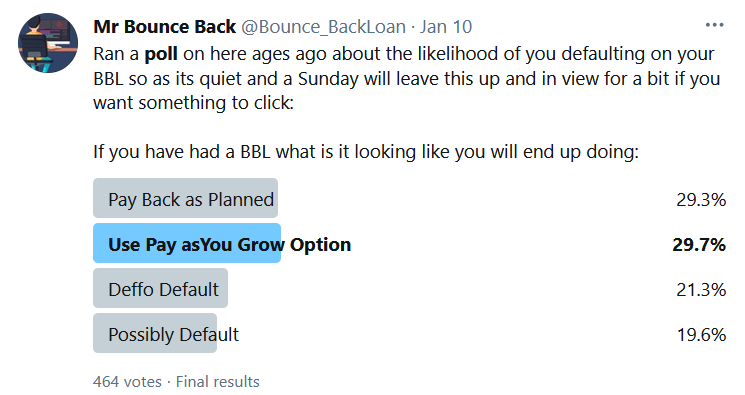 The most worrying aspect of that survey by the British Business Bank was that nine out of ten BBL recipients were also using some form of additional funding over and above their Bounce Back Loan: 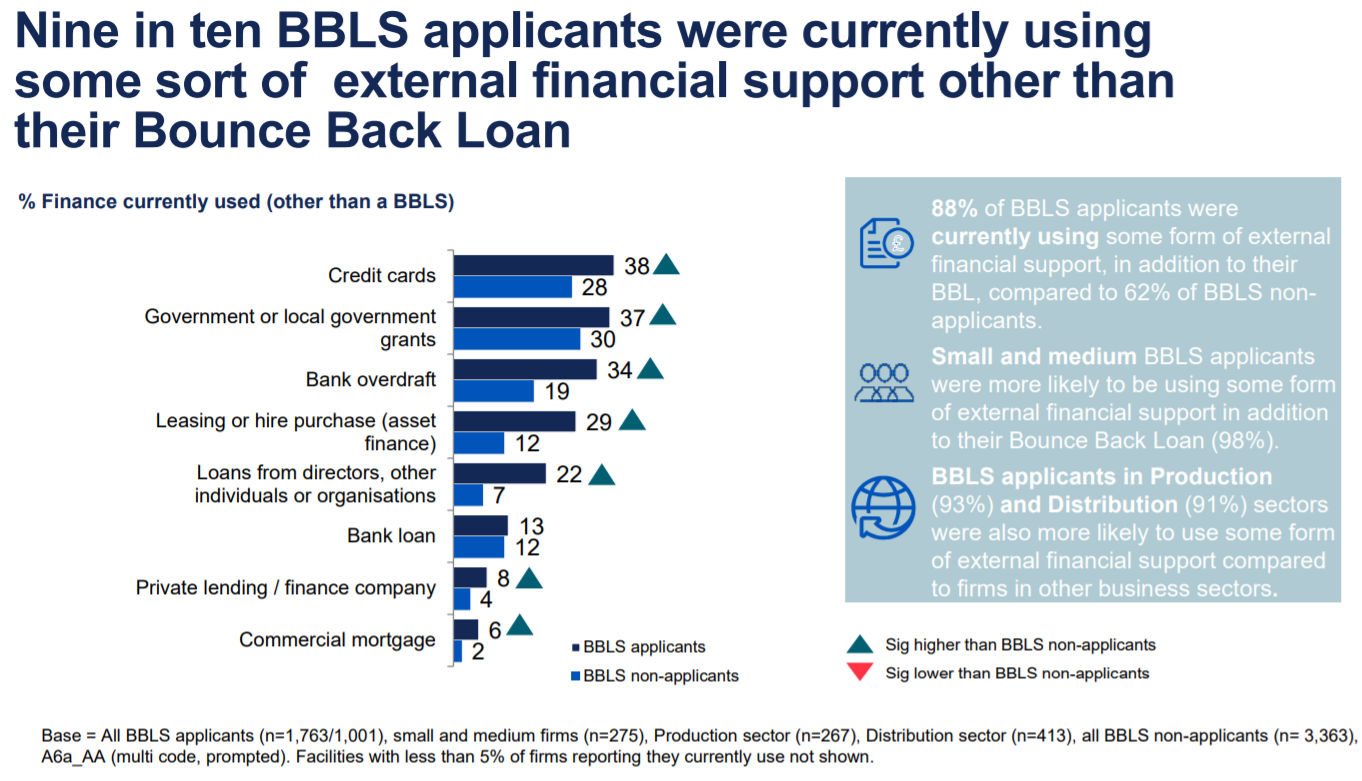 What Does All of the Above Point To?

Whether you believe the results of my polls or much prefer the data supplied by the British Business Bank survey, the one standout aspect that cannot be ignored is that there does need to be a rethink of the BBL scheme.

If not, then once profitable business will be forced to close due to the pandemic and resulting business related problems caused by the ongoing nature of the trading and day to day restrictions imposed on the nation and the launch of the BBL scheme, that was originally meant to weather a much smaller amount of time and blip in trading.

Options for Rishi Regarding Changes to the BBL Scheme

There are several options Rishi could take regarding a change to the BBL scheme, even at this late stage of the game:

If he is to make any changes then it would be prudent for him to do so in his Autumn Budget (27th of October), as by doing so banks would have enough time to make the required changes to their backends etc, before the first set of repayment holiday PAYG options are due to expire for those who took them early.

The Bounce Back Loan scheme was certainly a one off, and it is extremely doubtful any similar scheme will be forthcoming that showered, for all intents and purposes, helicopter money on SMEs.

Keep in mind the replacement scheme, that being the Recovery Loan Scheme, has been a flop, you only have to look at the way the British Business Bank designed that scheme and their outright refusal to publish figures on the approval rates of that scheme (despite promising they would release those figures in September) (which they haven’t) to know not many businesses got one of those loans.

We all know whatever the figures reveal, when they are finally published, it will be spun into a success, possibly with Rishi boasting as so few businesses got a Recovery Loan, that proves no one needed/wanted one, and how his Plan for Jobs is therefore working.

Roll on the 27th of October, we will know if Rishi is “ready to act” or not….